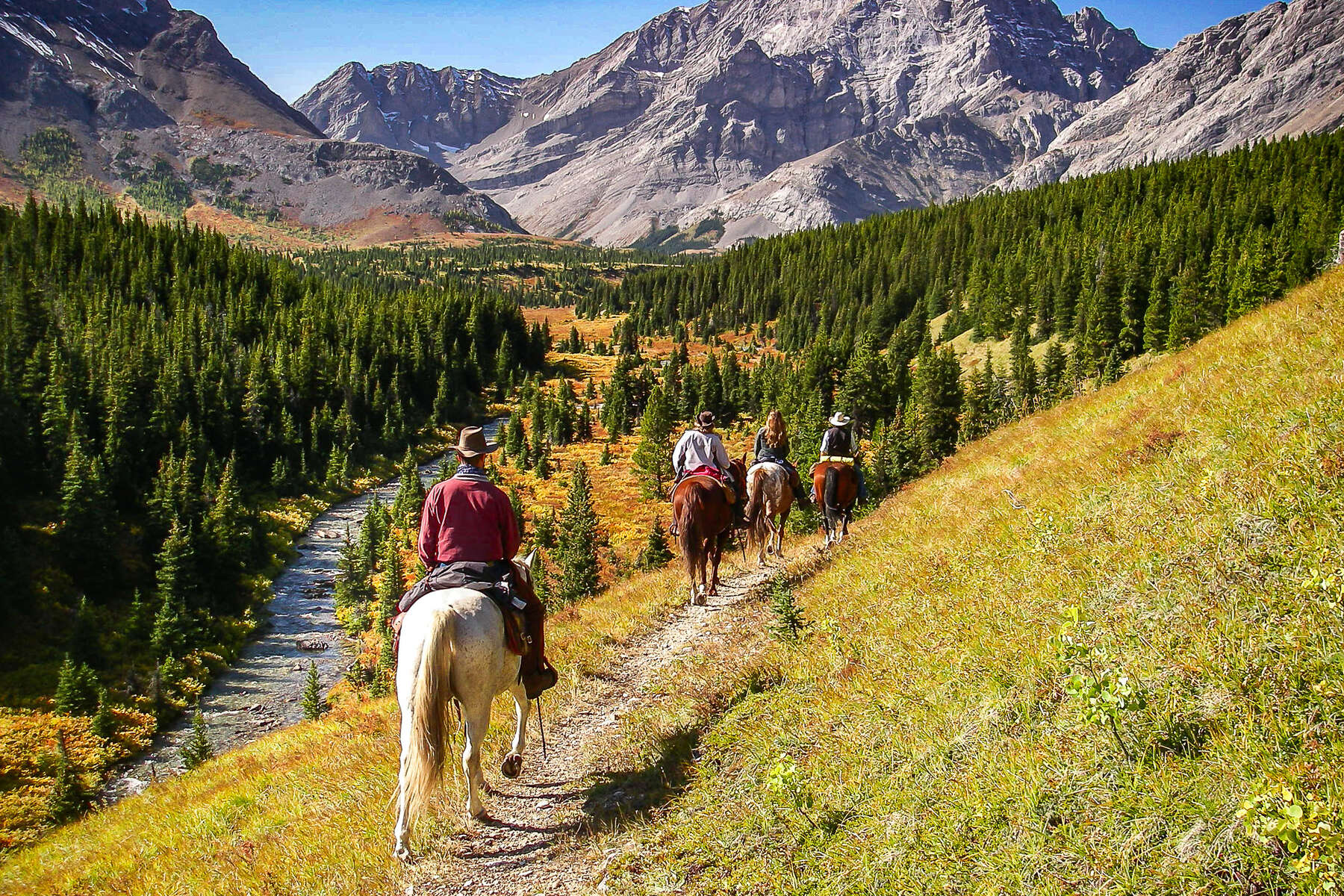 Horse riding trails in Canada are for adventurous riders seeking an unforgettable holiday. Ride remote trails through glacial valleys and dramatic mountain landscapes, following paths once used by trappers but today only traversed by wildlife - caribou, moose or even wolves. If you are lucky you may see them, as well as grizzly bears, lynx, beavers and osprey.
See all our trips 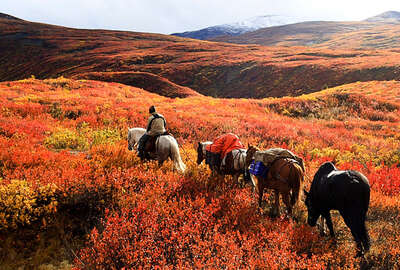 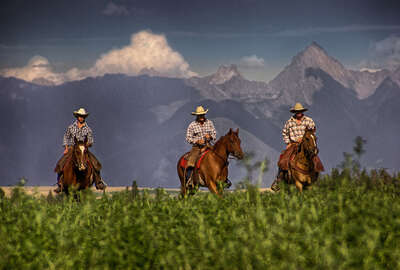 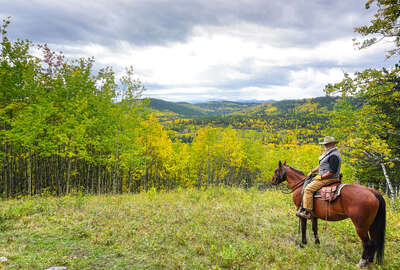 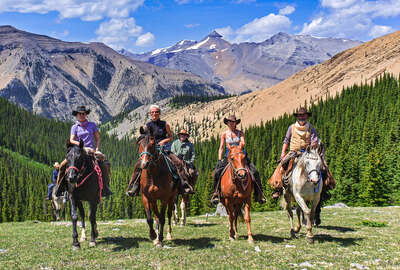 Pack trip in the Kananaskis

To find out if you need a visa and check formalities required, visit the official Canadian government website: https://www.canada.ca/en/immigration-refugees-citizenship/services/visit-canada.html

VISA AND ENTRY FORMALITIES
To enter Canada, a valid passport is required by all Australian, British and US nationals. All other nationalities should check with the local embassy. If you are travelling with children and only one parent is present, you should carry a letter of consent from the non-travelling parent.
UK Emergency Travel Documents (ETDs) are accepted for entry, airside transit and exit from Canada. You can apply for an Electronic Travel Authorisation using an ETD.
Visa-exempt foreign nationals, such as British nationals, are now required to have an Electronic Travel Authorization (eTA) to fly to or transit through Canada.
Applying for an eTA is a simple online process that takes just a few minutes. To apply, you must have a valid passport or acceptable travel document, a credit card, and an email address. You need to apply for an eTA before you book your flight to Canada. Most applications are approved quickly, even within minutes. However, some applications can take several days to process so don’t wait until the last minute.
You can find more information about eTAs and travel to Canada by following the link below: https://www.canada.ca/en/immigration-refugees-citizenship/services/visit-canada.html

In any case please check online the official government website for any updating or modification in the entry procedures.

TRAVELLING WITH CHILDREN
If you are travelling with children, and only one parent is present, you should carry a letter of consent from the non-travelling parent. Immigration officers have the right to question children using simple and appropriate language to establish whether there are any concerns about child abduction. A letter of consent may help to dispel potential concerns. For further information check with the Canadian High Commission or the Canada Border Services Agency.

TRAVELLING VIA THE USA
If you are planning on flying to Canada via the USA, You should complete an online pre-registration form on the Electronic System for Travel Authorisation (ESTA) website, before you travel. The US Customs and Border Patrol recommends that you do this at least 72 hours before departure. Applying for and securing an ESTA is a separate process to your Canadian eTA.

There are no health requirements to enter Canada as a short-stay tourist. Visitors intending to stay in Canada for more than six months, either as tourists, students or employees, may be required to take a medical examination. Visitors working in an occupation in which protection of public health is essential may be required to undergo a medical examination even if employment is only temporary. Check with the Canadian Consulate or High Commission for further information.

It is a condition of your booking with Equus Journeys that you have travel insurance which covers you for the riding activities to be undertaken. Your travel insurance should cover you for medical expenses and repatriation. Your guides will require your travel insurance details before they allow you to ride and may refuse to let you ride if you cannot provide them. You should take your insurance documents with you.
Our recommendation:
Cancellation and travel insurances are not included. Please note that insurance is mandatory. We recommend to take out an insurance policy as soon as your travel is booked in case of cancellation.

Canadian Dollar (CAD; symbol C$) = 100 cents. Notes are in denominations of C$100, 50, 20, 10 and 5. Coins are in denominations of C$2 and 1, and 25, 10, 5 cents. Although the 1c coin (or penny) remains legal tender, as of 2013 it is being phased out of circulation.
Major credit cards are widely accepted. Use of debit cards is widespread, although many stores impose a C$5 to C$20 minimum per debit card purchase, and service charges may apply.
ATMs are easy to find in populated areas but are less common in remote regions such as rural parts of the Northwest Territories, Nunuvat and Labrador. Use a machine affiliated with a major bank to reduce service charges; independent machines in locations such as casinos and convenience stores may carry high charges and do not always accept international cards.

+1 to dial Canada its 001 from UK
The populous areas of Canada along the border with the USA have excellent cellular and wired telecommunications, meaning that travellers are never far from an international phone call home, a WIFI connection or an internet cafe. Turn yourself and start heading north, and it's not long until the traveller will find themselves in the vast and sparsely populated lands that make up the majority of Canada. With no phones and no cellular coverage, and probably pretty sparse on power, it provides a great opportunity to unplug and get away from it all. In the northern reaches of Canada, above the arctic circle, you may even find that satellite devices might not work without a clear view of the sky over the equator.

Official name: Canada
Capital: Ottawa
Population: 35.2 million (2013)
Population density: 3.5 per sq km.
Area: 9,984,670 sq km (3,855,102 sq miles).
Language: There are two official languages across all of Canada: English and French. Spoken French is mostly limited to the province of Quebec, although even in Quebec, especially in Montreal, travellers will find English is widely spoken.
Religion: Around 70% of the population belong to the Christian faith; over half are Roman Catholic, followed by the United Church of Canada and Anglican denominations. There are numerous other active denominations and religions.
Political regime: Constitutional monarchy
Head of state: HM Queen Elizabeth II, represented by Governor General David Johnston since 2010.
Head of government: Prime Minister Stephen Harper since 2006.

Canada is one of the world's leading trading nations and a member of the G8 group of major industrial economies. The country has immense natural resources and a high standard of living.
Agriculture and fisheries are particularly important; Canada exports much of its agricultural produce (principally grain and oil seeds) and is the world's sixth-largest exporter of fish. Timber is another important sector, given that more than 40% of the land area is forest.
As a mineral producer, Canada exports crude oil and natural gas, copper, nickel, zinc, iron ore, asbestos, cement, coal and potash. Energy requirements are met by a mixture of hydroelectric, nuclear, coal and oil-fired generating stations. Manufacturing covers a wide range of industries from heavy engineering and chemicals to vehicle production and agro-business to office automation and commercial printing.
Almost 80% of the country's trade is with the USA, making this the world's largest single bilateral trade relationship.
Canada’s prudent economic policies have allowed it to weather the worst of the global economic downturn, with growth recovering to 3.1% in 2010. This is in part thanks to its increasing population due to immigration. Nonetheless, some economists predict Canada’s housing bubble will soon burst; house prices have rocketed in the past decade, with low interest rates encouraging consumers to borrow ever-increasing amounts.

The first settlements in Canada started in the Yukon approximately 26,000 years ago, arriving from Asia, with settlements expanding towards the Great Lakes, where modern day Toronto exists, some 9,000 years ago. Though they had known about it since 1000 AD, Europeans did not start settling Canada until the 16th century, when England and France began vying for dominance in the new world. Explorers gradually moved further inland, spurred on by the fur trade. After numerous wars between the British and French during this time, the English took control of all the area of New France, including the modern day provinces of Nova Scotia, New Brunswick and Quebec.
As the revolution started in the USA in the late 1700s, Canada provided a base for the English in North America. Eventually the territories south of the Great Lakes were ceded to the new country to Canada's south, and the modern day boundary between Canada and the USA was created. On July 1st, 1867, the British North America Act brought about Confederation, creating "one dominion under the name of Canada" with four provinces: Ontario, Quebec, Nova Scotia and New Brunswick, and also gave control of the Northwest Territories and Yukon to Canada. Manitoba, British Columbia and Prince Edward Island joined the Confederation over the next eight years.

Canada is the 2nd largest country in the world after Russia, offering a wide variety of geography and climate. The southern most parts of Canada in southern Ontario are further south than Rome! Canada lays claim (not universally recognized) to all the Arctic region which would include the North Pole.
Canada has one of the lowest population densities in the world, with only 3.5 people per square kilometre. Given that the majority of Canadian residents live within a few hundred kilometers of the border with USA, with a heavy population concentration in the "Windsor-Quebec City" corridor which includes the major cities of Toronto and Montreal, much of the Northern area of Canada is almost deserted.
The landscape is diverse, ranging from the Arctic tundra of the north to the great prairies of the central area. Westward are the Rocky Mountains, and in the southeast are the Great Lakes, the St Lawrence River and Niagara Falls.

Social conventions:
Handshaking predominates as the normal mode of greeting. Close friends often exchange kisses on the cheeks, particularly in French-speaking areas. Smoking has been banned in most public areas.

Canada is the second largest country in the world. It has a varied landscape, with majestic mountains, rolling plains, forested valleys and beautiful blue rivers and lakes. Canada's remote north and extensive forests are home to many animals including bears, wolves deer, mountain lions, beavers and otters. The country's lakes and rivers contain about 20 percent of all the fresh water on Earth and are full of trout and salmon. There are as many as 41 national parks protecting native wildlife in the country: it is a paradise for nature lovers and for those who want to explore it from the saddle.

Canada is a great choice for riders looking for a scenic riding holiday with many equestrian adventures on offer. For a family horseback holiday the Three Bars Ranch offersguests opportunities to explore the Rocky Mountains on horseback, while non-riders can enjoy other activities. In the Kananaskis near Calgary, we also have a variety of riding adventures to include a comfortable ranch stay, a Fall colours ride, a Winter wonderland adventure, or even a pack trip expedition. If you are a rider interested in discovering "Québec" (the French-speaking part of Canada), then the Cavalcade in Gaspesie trail ride at "the end of the world" would be a perfect ride for you. Last but not least, our Wild Yukon horseback pack trip will take you into the most remote places of Canada, close to the frontier with Alaska. An unforgettable riding experience.