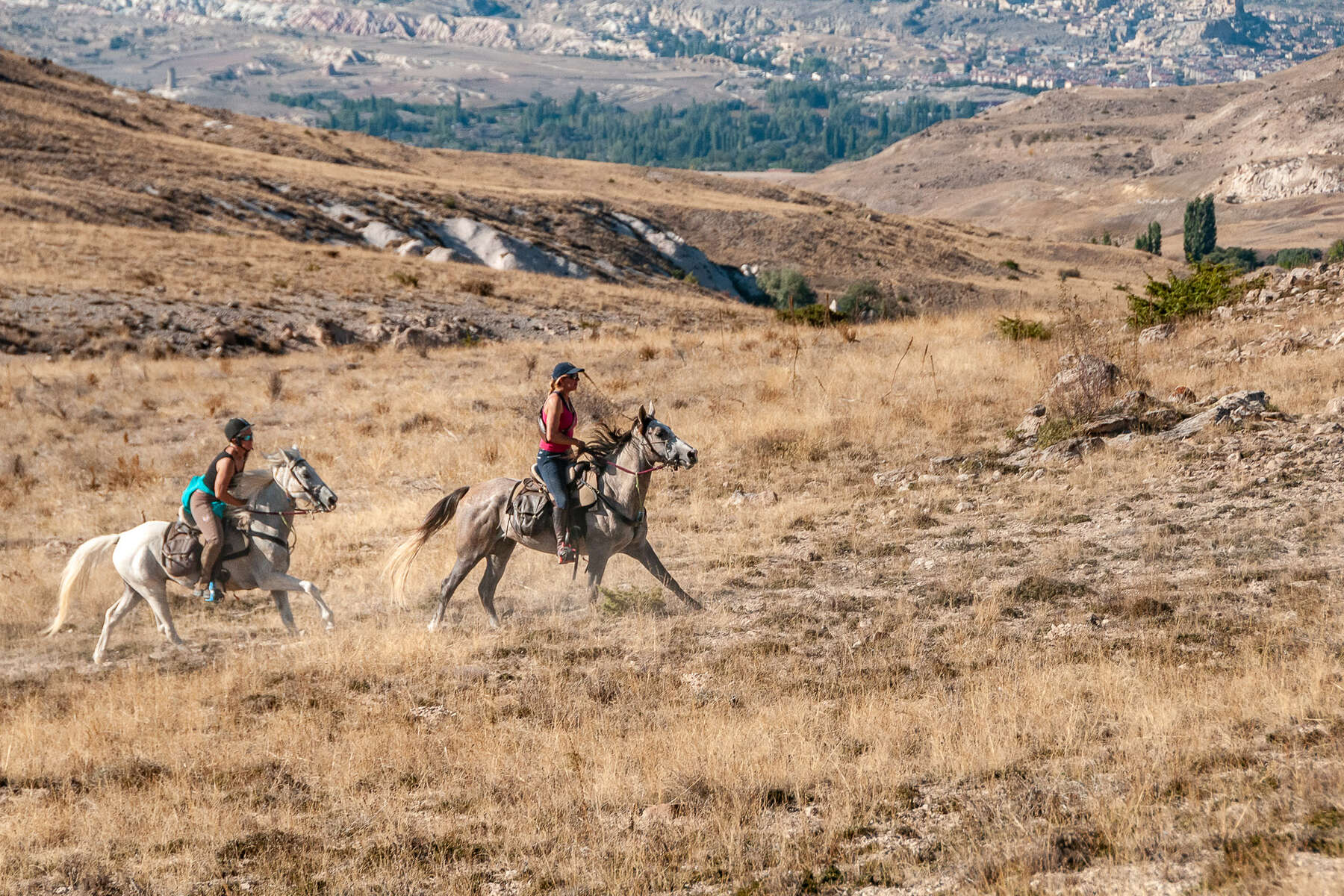 A horseback riding holiday in Turkey is an equestrian and cultural experience not to be missed. Horseback riders from Asia and Europe arrived in Turkey in waves and the country's history is an amalgamation of both. Follow trails through the grand landscapes of Cappadocia, with natural rock formations towering above you, and ancient carved caves beneath. Embark on an incredible trail ride through the unusual beauty of Capadoccia or the Taurus mountains, discovering the rich local culture and heritage with knowledgeable guides.
See all our trips 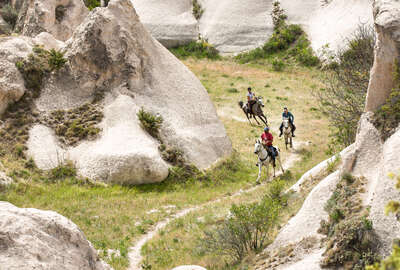 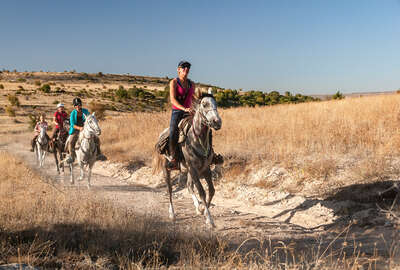 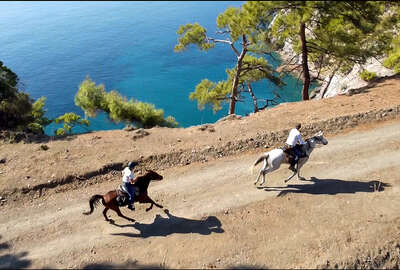 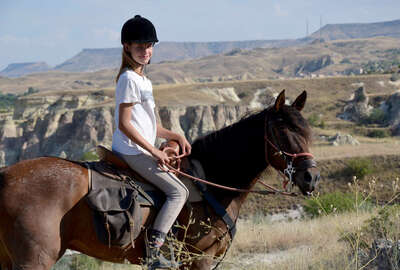 British Citizens travelling to Turkey for tourist or business purposes are able to travel without a visa for visits of up to 90 days in any 180-day period.

If you plan to remain in Turkey for a period of more than 90 days, you should either apply for a longer stay visa before you travel, or get a residence permit from the local authorities in Turkey before your 90 day stay has elapsed. If you intend to work in Turkey, ensure you have the correct permits. More information is available from the Turkish Ministry of the Interior. If you don’t abide by the terms of your visa or permit, you may be fined, deported and banned from re-entering the country.

If you’re entering Turkey via a land border crossing, make sure your passport has a dated entry stamp before you leave the border crossing area.
Turkish visit visas issued on arrival are valid for multiple stays up to a maximum of 90 days in a 180 day period. In case of problems with the computer systems at the Turkish port of entry, print off and carry a paper copy of your e-Visa, or make sure you have an electronic copy on a smart phone or other device to show to the immigration officer.

Passport validity
The Turkish government advise that your passport should be valid for at least 6 months from the date you enter Turkey and that there is a full blank page for the entry and exit stamps. You can find more detail about the requirements for entry into Turkey on the website of the Turkish Ministry of Foreign Affairs.

The European Health Insurance Card (EHIC), is not valid in Turkey. Make sure you have adequate travel health insurance and accessible funds to cover the cost of any medical treatment abroad and repatriation.

Turkish Lira is the local currency of the Republic of Turkey. Visitors can exchange their cash money for Turkish Lira at exchange tiles and banks. International credit and debit cards are widely accepted in shops and restaurants throughout Turkey. However it is advisable also to carry cash for the smaller shops and cafes, particularly in more rural areas.

At various points in its history, the region has been inhabited by diverse civilizations including the Assyrians, Greeks, Thracians, Phrygians, Urartians, and Armenians. Hellenization started during the era of Alexander the Great and continued into the Byzantine era. The Seljuk Turks began migrating into the area in the 11th century, and their victory over the Byzantines at the Battle of Manzikert in 1071 symbolizes the start and foundation of Turkey. The Seljuk Sultanate of Rûm ruled Anatolia until the Mongol invasion in 1243, when it disintegrated into small Turkish principalities. Beginning in the late 13th-century, the Ottomans started uniting these Turkish principalities. After Mehmed II conquered Constantinople in 1453, Ottoman expansion continued under Selim I. During the reign of Suleiman the Magnificent the Ottoman Empire encompassed much of Southeast Europe, West Asia and North Africa.

In 1913, a coup d'état effectively put the country under the control of the Three Pashas. During World War I, the Ottoman government committed genocides against its Armenian, Assyrian and Pontic Greek subjects. Following the war, the conglomeration of territories and peoples that formerly comprised the Ottoman Empire was partitioned into several new states. The Turkish War of Independence, initiated by Mustafa Kemal Atatürk and his colleagues against occupying Allies, resulted in the abolition of monarchy in 1922 and the establishment of the Republic of Turkey in 1923, with Atatürk as its first president. Atatürk enacted numerous reforms, many of which incorporated various aspects of Western thought, philosophy, and customs into the new form of Turkish government.

Turkey is a charter member of the UN, an early member of NATO, the IMF and the World Bank. Turkey is a secular, unitary, formerly parliamentary republic which adopted a presidential system with a referendum in 2017; the new system came into effect with the presidential election in 2018.

Turkey occupies a unique geographic position, lying partly in Asia and partly in Europe. Throughout its history it has acted as both a barrier and a bridge between the two continents.

Turkey is situated at the crossroads of the Balkans, Caucasus, Middle East, and eastern Mediterranean. It is among the larger countries of the region in terms of territory and population, and its land area is greater than that of any European state. Nearly all of the country is in Asia, comprising the oblong peninsula of Asia Minor—also known as Anatolia (Anadolu)—and, in the east, part of a mountainous region sometimes known as the Armenian Highland. The remainder—Turkish Thrace (Trakya)—lies in the extreme southeastern part of Europe, a tiny remnant of an empire that once extended over much of the Balkans.

Turkey is filled with such strong history, Ancient Greece, Persian, Roman, Byzantine and Ottoman empires have all left their mark on this eclectic country.  With a landscape more fitting to a fairytale, what better way is there to experience the beauty of the Cappadocia region than from horseback?

The distinctive rock chimneys oozing out above ground are as well known as the fascinating cavern architecture that is below ground. Riding over 200km on robust and sure-footed Arab and Arab crosses, our rides in Turkey offer a pacey riding adventure with plenty of opportunities for canters and gallops across the sandy terrain. Enjoy wonderful local cuisine and lots of Turkish black tea along the way.