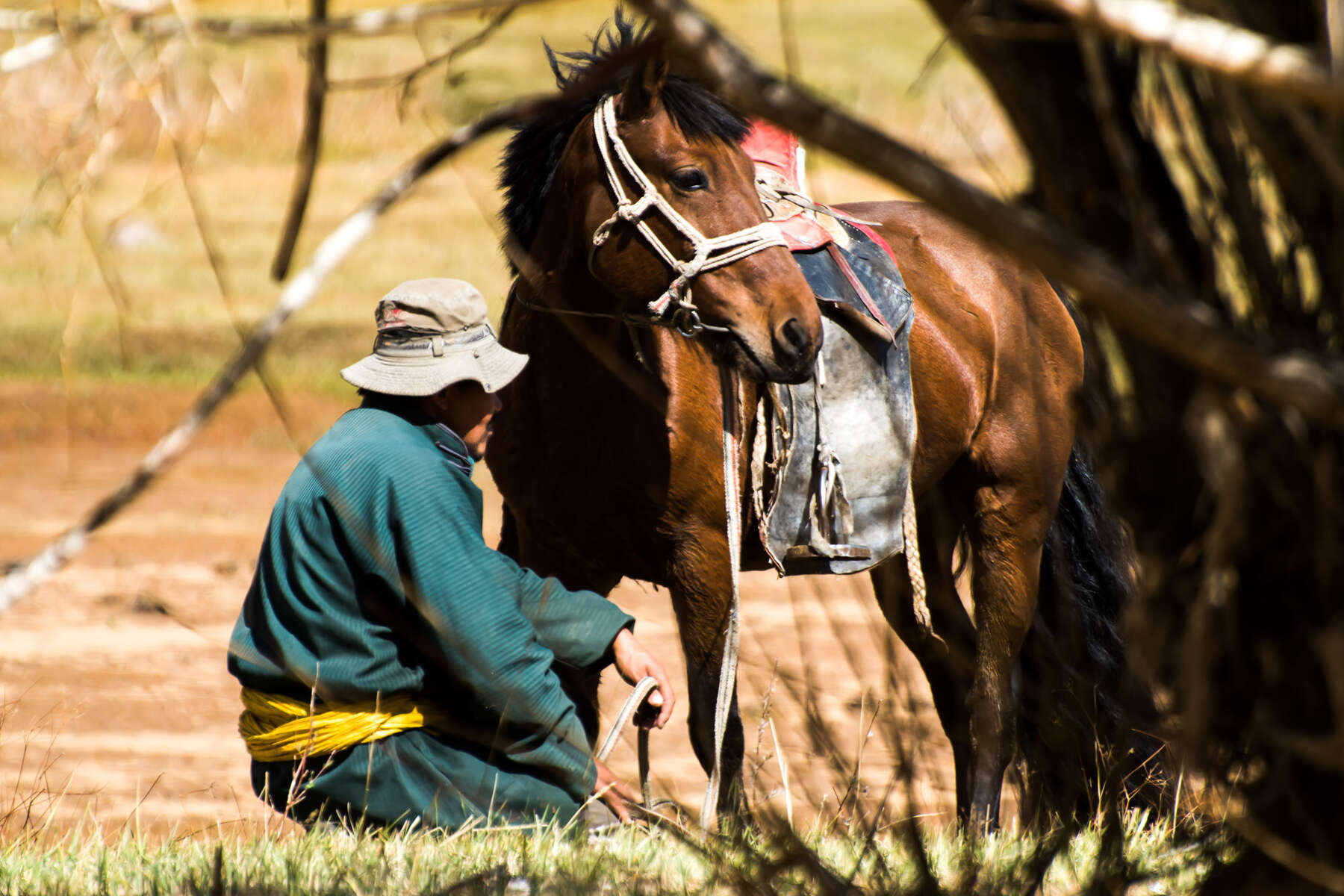 The experience of a riding holiday in Mongolia will stay with you for life! The vastness of the rolling steppes, dense forests, crystal clear rivers and peaks are legendary. The nomadic Mongolian people offer hospitality which, despite their stoic temperament forged by harsh living conditions, is delightfully warm and welcoming and the Mongolian horses are fast and strong despite their small stature. Whether you choose horseback trails through the Gobi desert, across the vast steppes of Kentii, or a visit to meet the reindeer herders in the far north, a riding holiday in Mongolia will leave you uplifted and in awe.
See all our trips 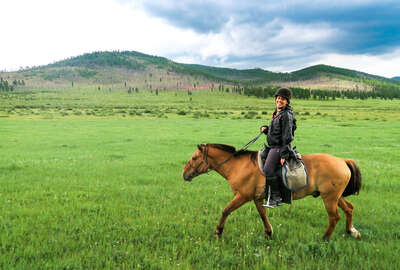 Riding the steppes of Khentii 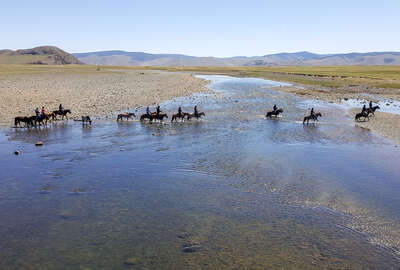 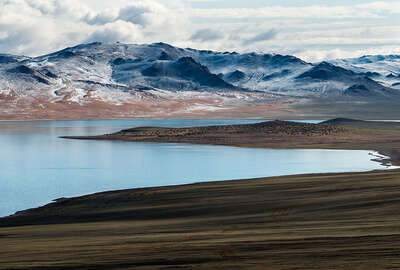 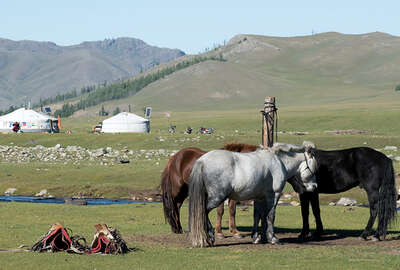 Across the Orkhon Valley 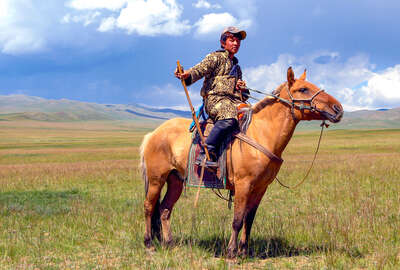 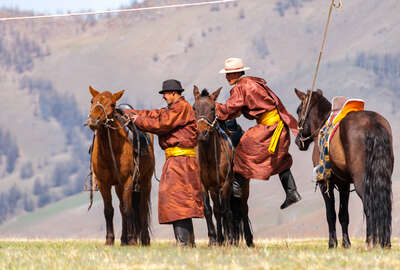 Riding and yurts in Mongolia 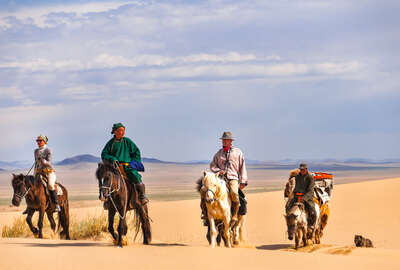 To travel to Mongolia, a passport valid for at least six months is required by all nationals of Australia, Canada, USA, UK and other EU countries.

Visas:
To visit Mongolia, you will need to organise a visa. A Mongolian visit visa is usually valid for a stay of up to 30 days within six months from the date of issue. You can find more information by following the link: https://www.gov.uk/foreign-travel-advice/mongolia/entry-requirements

Nationals of the USA do not require a visa if entering Mongolia as a tourist for stays of up to 90 days.

When travelling to Russia or China from Mongolia, the UK Foreign & Commonwealth Office advises you to get visas before travelling - seek advice from the Chinese and Russian Embassies in London BEFORE travelling. There have been issues with getting Russian visas in Ulaanbaatar.

Online visa:
As of 1 May 2019, companies and individuals who are inviting foreign citizens to Mongolia can request entry permissions online for visa on arrival. This is for single or multiple entry visas for tourism (J) and business visit (B) categories only.
You should remember that at the entry point, the immigration authority might interview you and they can refuse your entry to Mongolia. It is important for the inviting individual or company to provide full and true information about the person.

Our recommendation:
Cancellation and travel insurances are not included. Please note that insurance is mandatory. We recommend to take out an insurance policy as soon as your travel is booked in case of cancellation.

Language: Khalkh Mongolian is the official language. Kazakh is spoken by 5% of the population. There are also many Mongolian dialects.
Religion: Buddhist Lamaism is the main religion, although there is no state religion. The Kazakhs in western Mongolia loosely adhere to Sunni Islam. About 5% of Mongolians are Christian. The traditional animist religion is still popular in northern Mongolia.
Political regime: Republic
Head of state: President Tsakhiagiin Elbegdorj since 2009

Mongolia's economy has traditionally been based on herding and agriculture. Mongolia has extensive mineral deposits; copper, coal, tin, tungsten and gold account for a large part of industrial production.
Mongolia's economy continues to be heavily influenced by its neighbours. For example, Mongolia purchases 80% of its petroleum products and a substantial amount of electric power from Russia, leaving it vulnerable to price increases. China is Mongolia's chief export partner.
Remittances from Mongolians working abroad both legally and illegally are sizable, and money laundering is a growing concern. Registered unemployment was at 2.7% in 2007 but the real figure is 30% or more because so few register. Unemployment figures increased in early 2009 as the global economic downturn slowed the flow of money in the country.
Mongolia, which joined the World Trade Organization in 1997, seeks to expand its participation and integration into Asian regional economic and trade regimes.

Mongolia has been inhabited for over 800,000 years. Mongolia, since prehistoric times, has been inhabited by nomads who, from time to time, formed great confederations that rose to prominence. The first of these, the Xiongnu, were brought together to form a confederation by Modu Shanyu in 209 BC. During the 7th and 8th centuries, Uyghurs and then Khitans and Jurchens ruled. By the 10th century, the country was divided into numerous tribes linked through transient alliances and involved in the old patterns of internal strife.
In the chaos of the late 12th century, a chieftain named Temüjin finally succeeded in uniting the Mongol tribes between Manchuria and the Altai Mountains. In 1206, he took the title Genghis Khan, and waged a series of military campaigns - renowned for their brutality and ferocity - sweeping through much of Asia, and forming the Mongol Empire, the largest contiguous land empire in world history. Under his successors it stretched from present-day Poland in the west to Korea in the east, and from Siberia in the north to the Gulf of Oman and Vietnam in the south, covering some 33,000,000 square kilometres.
The next centuries were marked by violent power struggles between various factions, notably the Genghisids and the non-Genghisid Oirads and numerous Chinese invasions. The last Mongol Khan was Ligden Khan in the early 17th century. He got into conflicts with the Manchu over the looting of Chinese cities, and managed to alienate most Mongol tribes. Until 1911, the Manchu maintained control of Mongolia with a series of alliances and intermarriages, as well as military and economic measures.
Mongolian independence was achieved in 1911 after the fall of the Qing Dynasty. China attempted to reassert its rule following the Russian Revolution of 1917 but was beaten back in 1921, with Soviet help. The Soviet intervention led to virtual occupation by the USSR for the next 70 years.
China finally recognised Mongolian independence in 1944 and in 1990 pro-democracy demonstrations erupted in Ulaanbaatar eventually leading to the demise of communism and the creation of a new constitution based on democratic principles.
Mongolia is undergoing dramatic change with the demise of a traditional nomadic lifestyle that, a generation ago, was lived by a third of the population. Mongolia's cities are growing rapidly as people leave the land. Another important change has been the resurgence of Buddhism, which was largely suppressed under Communism; Mongolians are adherents of the Dalai Lama, although this is handled with great caution by the country's leadership for fear of upsetting the Chinese.

Mongolia is located in the northern part of Asia and is landlocked between China and Russia. Although Mongolia does not share a border with Kazakhstan, its westernmost point is only 38 kilometres from Kazakhstan. The terrain is mainly mountains or rolling plateaus. The high Altai Mountains of the west and the north slowly descend into the plains and depressions in the east and the south. The Khüiten Peak in the extreme west of Mongolia and bordering China, is the highest point at 4,374 metres above sea level. The lowest point in the country though is still above 500 metres and the average elevation is 1,580 metres. The landscape includes one of Asia's largest freshwater lakes (Lake Khövsgöl), many salt lakes, marshes, sand dunes, rolling grasslands, alpine forests, and permanent montane glaciers. Northern and western Mongolia are seismically active zones, with frequent earthquakes and many hot springs and extinct volcanoes. The name "Gobi" is a Mongol term for a desert steppe, which usually refers to a category of arid rangeland with insufficient vegetation to support marmots but with enough to support camels. Mongols distinguish Gobi from desert proper, although the distinction is not always apparent to outsiders unfamiliar with the Mongolian landscape. Gobi rangelands are fragile and are easily destroyed by overgrazing, which results in expansion of the true desert, a stony waste where not even Bactrian camels can survive.

Social conventions:
Religious customs should be respected. Mongolia has a large number of customs and traditions although Mongolians are generally not offended when foreigners break custom.

Mongolia is the cradle of equestrianism in Asia and is an excellent choice for an adventurous trail riding holiday. This is a big country with distinctive provinces and as such, every holiday is different. However, they all have two very important features in common: the Mongolian horse and the fantastic hospitality of the Mongol people.