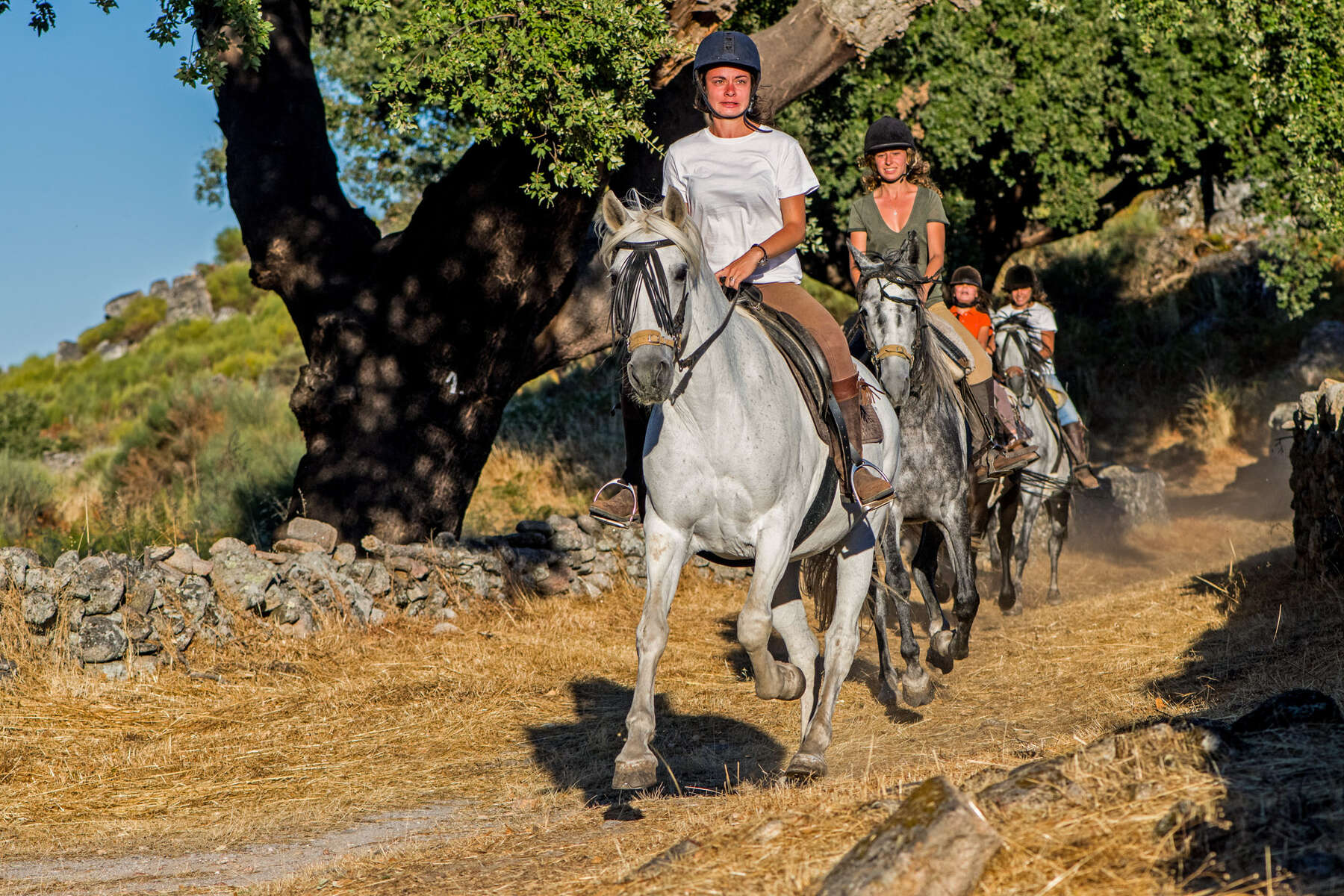 Portugal is a country with strong and established equestrian traditions; indeed, it is difficult to even discuss classical dressage without mentioning the late Portuguese master, Nuno Oliveria. Riding holidays in Portugal can open the door to the Portuguese School of Equestrian Art and allow riders to experience classical dressage on a Lusitano schoolmaster, whatever their experience of dressage to date. Alongside offering high-quality training opportunities, Portugal is the setting for stunning trail rides through beautiful picturesque villages and countryside as well as exhilarating fast-paced beach rides along the breathtaking Alentejo coast.
See all our trips 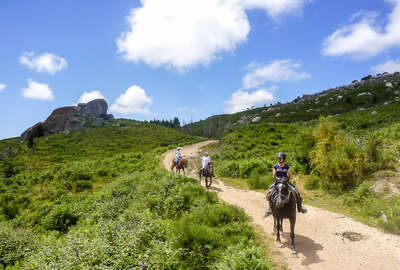 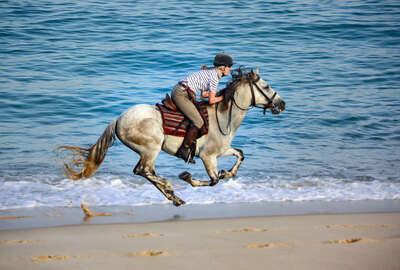 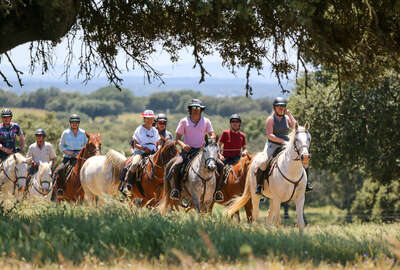 Kingdom of the Lusitano 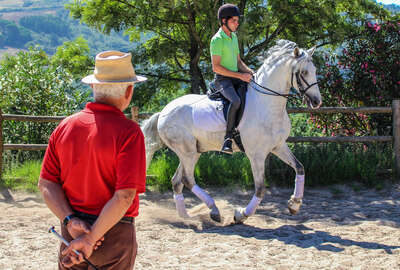 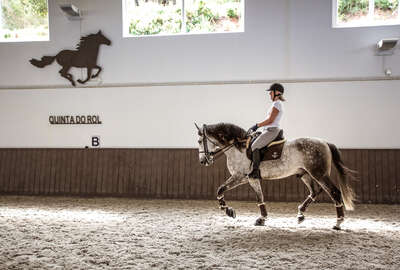 Dressage holiday at Quinta Do Rol 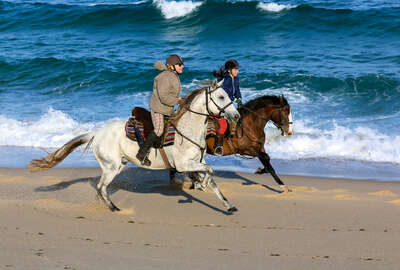 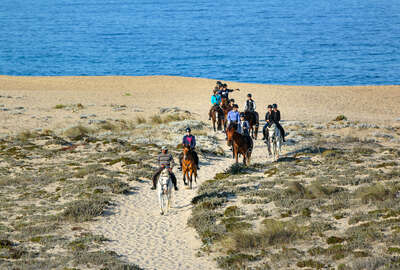 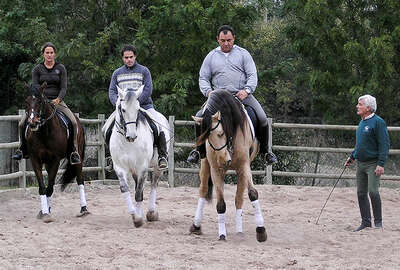 Classical Dressage and the Golega Fair

Visas - you should be aware that the rules for travelling or working in European countries changed on 1 January 2021:
- you can travel to countries in the Schengen area for up to 90 days in any 180-day period without a visa. This applies if you travel as a tourist, to visit family or friends, to attend business meetings, cultural or sports events, or for short-term studies or training
- if you are travelling to Portugal and other Schengen countries without a visa, make sure your whole visit is within the 90-day limit. Visits to Schengen countries within the previous 180 days before you travel count towards your 90 days

At border control for Portugal, you may need to:

- show a return or onward ticket
- show you have enough money for your stay, and
- use separate lanes from EU, EEA and Swiss citizens when queueing
- Your passport may be stamped on entry and exit.

Please visit for the FCO website for up-to-date information - https://www.gov.uk/foreign-travel-advice/portugal

It’s important to take out appropriate travel insurance for your needs. A GHIC or EHIC is not an alternative to travel insurance and you should have both before you travel. It does not cover all health-related costs, for example, medical repatriation, ongoing medical treatment and non-urgent treatment.


There are state health centres throughout the country (generally open from 0800 to 2000) where you can receive treatment for minor ailments and injuries, and major emergency hospitals in large towns which remain open throughout the night.
Even though pharmacies are well stocked, take a decent supply of medication with you, and be aware pharmacies are usually closed for two hours over lunchtime. Carry a legible prescription with you to show that you legally use the medication. If you wear glasses, take a spare pair and your prescription just in case you need to get new glasses made up quickly.

Vaccination against hepatitis B is sometimes recommended.

Portugal has adopted the Euro (EUR, symbol: €) as its official currency. One Euro is divided into 100 cents, which is sometimes referred to as eurocents, especially when distinguishing them with the US cents.
Euro banknotes come in denominations of €5, €10, €20, €50, €100, €200, €500. The highest three denominations are rarely used in everyday transactions. All Euro banknotes have a common design for each denomination on both sides throughout the Eurozone.
The Euro coins are 1 cent, 2 cents, 5 cents, 10 cents, 20 cents, 50 cents, €1 and €2. Some countries in the Eurozone have law which requires cash transactions to be rounded to the nearest 5 cents. All Euro coins have a common design on the denomination (value) side, while the opposite side may have a different image from one country to another. Although the image side may be different, all Euro coins remain legal tender throughout the Eurozone.

The dialling code for Portugal is +351

Language: European Portuguese is spoken in Portugal with different dialects throughout the country.
Religion: Roman Catholics make up around 85% of the population, but only about 20% of these regularly attend mass and take the sacraments. The remaining 15% is a mixture of Agnostic, Anglican, Atheist, Jewish, Muslim and Protestant communities, together with other religions that have been brought in through immigration over the years.
Head of state: President Anibal Cavaco Silva since 2006
Head of government: Prime Minister Antonio Costa
Capital: Lisbon
Political regime: Republic
:

Portugal was traditionally an agrarian economy, but since it joined the EU in 1986 its industrial and service sectors have grown considerably by comparison. Agriculture still employs around 10% of the workforce (unusually high by Western European standards) and contributes around 8% of GDP, producing wheat, maize, potatoes, tomatoes, olives, grapes, fish and meat and dairy products. The manufacturing sector is dominated by the textile, footwear and machinery industries.
Portugal joined the Eurozone upon its inauguration in 1999. Unfortunately, since then, the economy has struggled. It is expected to contract further amid spending cuts to comply with a €78 billion bailout from the EU and the International Monetary Fund. Unemployment stands at around 12.3%, while inflation is about 3%.

The early history of Portugal, whose name derives from the Roman name Portus Cale, is shared with the rest of the Iberian Peninsula. The region was settled by Pre-Celts and Celts, giving origin to peoples like the Gallaeci, Lusitanians, Celtici and Cynetes, visited by Phoenicians and Carthaginians and incorporated in the Roman Republic dominions. A victory over the Muslims at Battle of Ourique in 1139 is traditionally taken as the occasion when Portugal was transformed from a county into an independent kingdom: the Kingdom of Portugal.
In 1415, Portugal conquered the first of its overseas colonies by conquering Ceuta, a prosperous Islamic trade center in North Africa. There followed the first discoveries in the Atlantic: Madeira and the Azores, which led to the first colonization movements. Throughout the 15th century, Portuguese explorers sailed the coast of Africa, establishing trading posts for several common types of tradable commodities at the time, ranging from gold to slaves, as they looked for a route to India and its spices, which were coveted in Europe. In 1498, Vasco da Gama finally reached India and brought economic prosperity to Portugal and its population of 1,5 million residents then. In 1500, Pedro Álvares Cabral, en route to India, discovered Brazil and claimed it for Portugal.
Portugal's independence was interrupted between 1580 and 1640. Because the heirless King Sebastian died in the battle of Alcácer Quibir in Morocco, Philip II of Spain claimed his throne and so became Philip I of Portugal. Although Portugal did not lose its formal independence, it was governed by the same monarch who governed Spain. From 1595 to 1663 the Dutch-Portuguese War primarily involved the Dutch companies invading many Portuguese colonies and commercial interests in Brazil, Africa, India and the Far East, resulting in the loss of the Portuguese Indian Sea trade monopoly.
The country was further weakened by the destruction of much of its capital city in a 1755 earthquake, occupation during the Napoleonic Wars and the loss of its largest colony, Brazil, in 1822. From the middle of the 19th century to the late 1950s, nearly two million Portuguese left Europe to live in Brazil and the United States. In 1910, there was a revolution that deposed the monarchy; however, the subsequent republic was unable to solve the country's problems. Amid corruption, repression of the Church, and the near bankruptcy of the state, a military coup in 1926 installed a dictatorship that remained until another coup in 1974. The new government instituted sweeping democratic reforms and granted independence to all of Portugal's African colonies in 1975.
In 1986, Portugal joined the European Union (then the European Economic Community). In 1999, Portugal was one of the founding countries of the euro and the Eurozone.

Portugal juts out into the Atlantic in the far southwest of Europe otherwise known as the Iberian Peninsula. The only country it shares a border with is its neighbour Spain to the north and the east, with the Atlantic Ocean hugging its 800km (500-mile) coastline to the south and west.
Outside the large urban areas, the countryside is a great deal more rural and sparse than in many other European countries. Portugal is crossed by several rivers which have their origin in Spain.
Portugal possesses a high plain of varying height intersected by deep valleys. The north of the country is rugged, mountainous and dotted with vineyards. The high northern point of the Serra da Estrela proves a popular area for skiing, while Serra de São Mamede further south on the Spanish border is a hiking favourite.
After the stunning slopes of the central regions, the vast plains of the Alentejo region stretch south of Lisbon, with a range of mountains dividing the Alentejo from the Algarve, whose wide sandy beaches and attractive bays run along the south coast.
Over half the country is used for agriculture, though the soil is much richer for cultivation in the greener north. The capital, Lisbon, sits about two-thirds down the west coast. Porto is also situated on the coast in the northwest of the country. Smaller Faro nestles on the southern end of the country, its airport a busy hub for Algarve sunseekers and swathes of golfers looking for year-round sun.

Social conventions:
Portugal is a fascinating mix of culture and folklore, depending on what part of the country you are visiting. Traditional ranchos folclóricos folklore, which is often illustrated with dance and song, tends to dominate the smaller towns and villages, with art and drama bigger in the larger towns and cities.
The Portuguese are warm, hospitable people who revel in exhibitions, films, crafts, concerts, plays, café culture and also shopping malls (to combat the summer heat!). The summer festival season is a particularly pleasant experience, with football and bull fighting also enjoyed, along with the traditional religious activities that cater for the majority Catholic population.
Casual wear is widely acceptable, but you shouldn’t wear beach clothing in towns. Smoking has been prohibited in public indoor spaces since 2008 and the ban includes cinemas, theatres, buses and most restaurants.

The Lusitano horse is synonomous with riding in Portugal and on many of our rides you will experience riding either pure-bred or part-bred Lusitano's.

For the dressage enthusiast there are classical dressage lessons at Alcainca where you can improve your skills under the expert guidance of their classically trained instructors. On pure-bred Lusitano schoolmasters you can have a go at piaffe, passage and spanish walk as well as work on your seat, position and general riding.

If you prefer trail riding then there is plenty on offer. Our Bottlenose and Dolphin Trails follow the exact same route on the same herd of horses and with the same guide - the only difference is the accommodation. On the Bottlenose trail you stay in simple, local hotels which are clean and comfortable whilst on the Dolphin trail you stay in converted farmhouses or more upmarket hotels. Both these trails are circular, starting and ending at the same place.

If you prefer a linear trail, where you start at one place and finish at another, then our Alentejo Coastal trail journeys along the coast, either starting with a beach ride and ending in the mountains, or vice versa.

Inland and with the same horses and guide as our coastal rides above, our fantastic Kingdom of the Lusitano trail ride visits famous Lusitano stud farms during the spring when the foals are born.

In the north of Portugal we have a rustic trail ride which heads high into the mountains bordering Spain. On this trail you don't ride Lusitano's, but local horses which are sure-footed and suited to the terrain. There is the chance to see herds of wild horses on this Wild North Portugal trail ride.