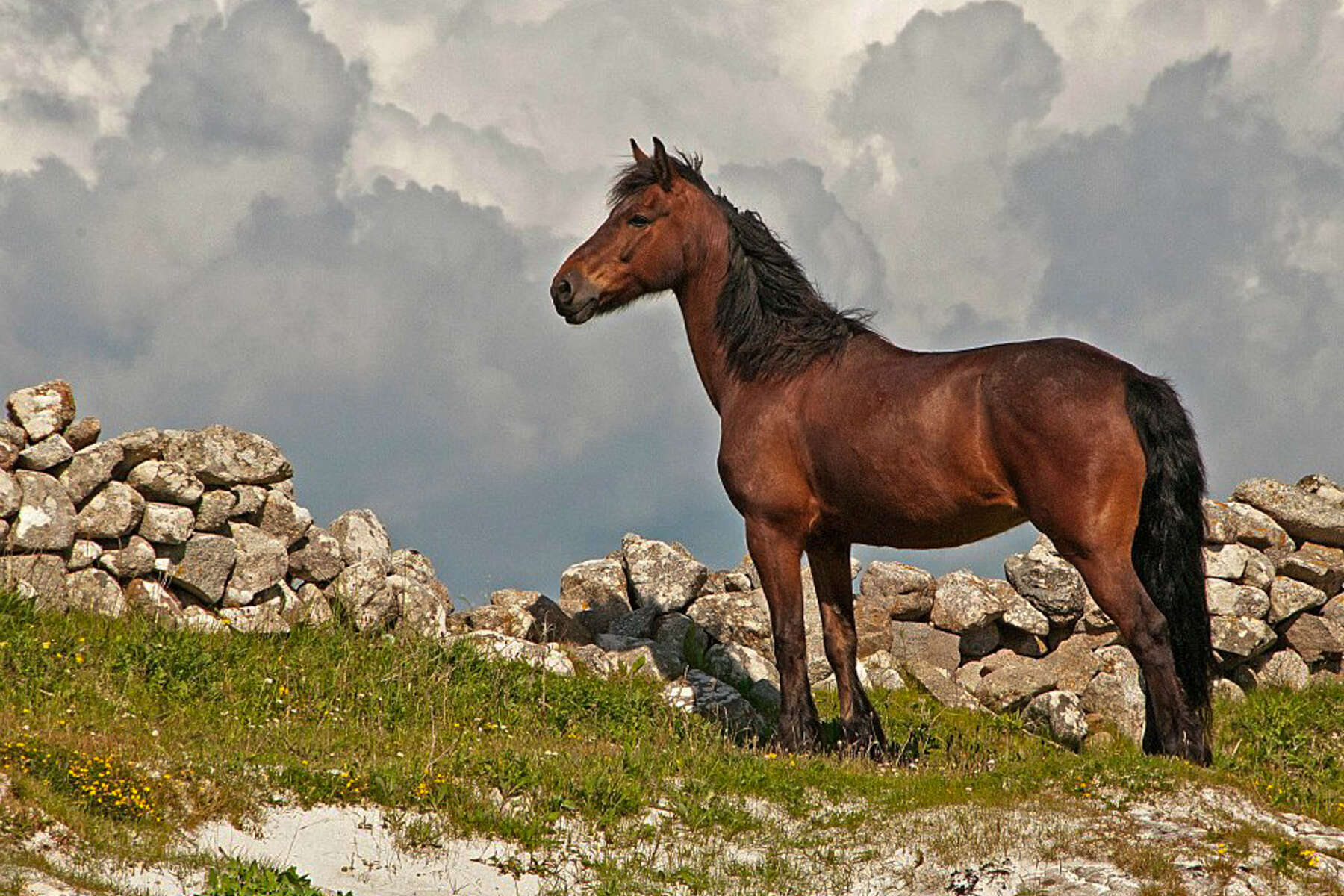 The Emerald Isle is a mecca for horse riders. The Connemara pony, the Irish Draught, the Irish cob, the Irish Hunter.... not forgetting the beautiful landscapes and famous Irish hospitality. Relax on a riding holiday where you can enjoy lessons, join trails or jump cross country courses. Or join a horse riding trail in Ireland for a voyage of discovery through mountains, along beaches and across wild heathlands. Just a short distance from home and yet a world away...
See all our trips 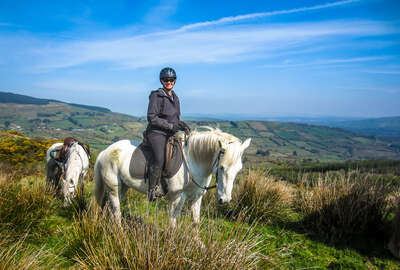 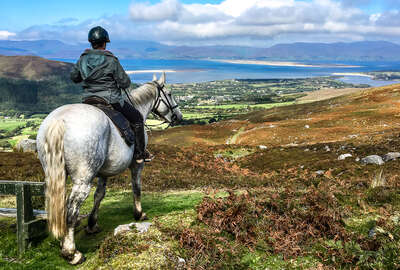 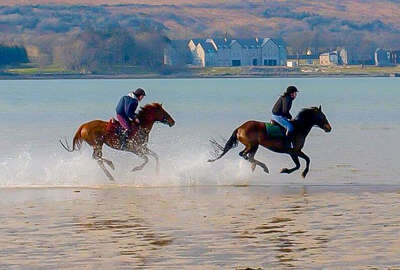 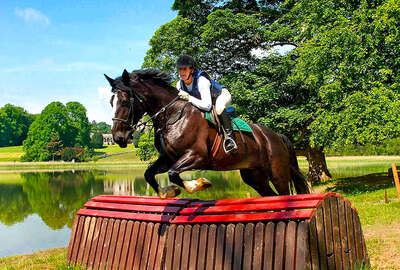 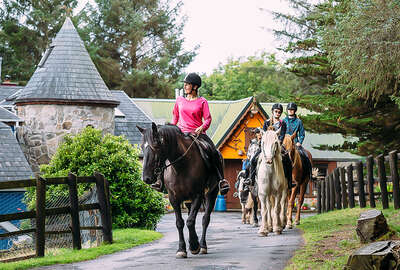 Culture and sights of Ireland 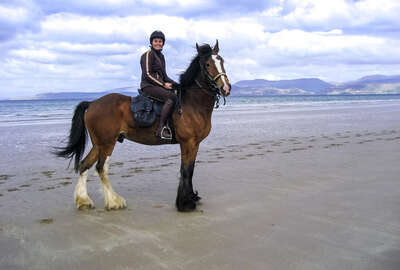 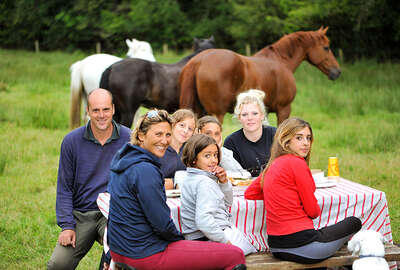 ID
Ireland, along with the UK, is a member of the Common Travel Area. British nationals travelling from the UK don’t need a passport to visit Ireland. However, Irish immigration officers will check the ID of all passengers arriving by air from the UK and may ask for proof of nationality, particularly if you were born outside the UK. You are therefore advised to take your British passport with you.
For more information about the types of ID you might be asked to present, see the website of the Ireland Citizens Information Board.
Before travelling, check with your carrier about their ID requirements, as most airlines and other transport providers won’t carry passengers to and from Ireland unless they’ve seen satisfactory photographic ID.

Passport validity
If you’re using a passport to enter Ireland, it should be valid for the proposed duration of your stay; you don’t need any additional period of validity on your passport beyond this.

Please visit for the FCO website for up-to-date information - https://www.gov.uk/foreign-travel-advice/ireland/entry-requirements


There are no vaccinations legally required to travel to Ireland. The country has a relatively good public health infrastucture, with hospitals, generally good doctors and widely available medicines etc.

The electrical supply in Ireland is 230v 50hz. The plugs and sockets are a three-pronged formation, the same as those used in the United Kingdom. If your appliances operate on a different current you will need a power converter and plug adapter.

Ireland has adopted the Euro (ISO code: EUR, symbol: €) as its official currency. One Euro is divided into 100 cents, which is sometimes referred to as eurocents, especially when distinguishing them with the US cents.
Euro banknotes come in denominations of €5, €10, €20, €50, €100, €200, €500. The highest three denominations are rarely used in everyday transactions. All Euro banknotes have a common design for each denomination on both sides throughout the Eurozone.
The Euro coins are 1 cent, 2 cents, 5 cents, 10 cents, 20 cents, 50 cents, €1 and €2. Some countries in the Eurozone have law which requires cash transactions to be rounded to the nearest 5 cents. All Euro coins have a common design on the denomination (value) side, while the opposite side may have a different image from one country to another. Although the image side may be different, all Euro coins remain legal tender throughout the Eurozone.
Visa and Mastercard are generally accepted, though American Express can be a bit harder.

The telephone dialling code is +353
Ireland is in the same time zone as the UK, so GMT.

Not so long ago Ireland's economy was characterised as the 'Celtic Tiger', the country having transformed itself from a struggling nation into one of the most prosperous in Europe.
After a long growth spurt, however, this economic boom came to a halt in 2008 as a result of the global economic downturn, suffering greatly. The property bubble was particularly inflated here. The global recession saw the Irish economy slump severely, with Ireland recently accepting an €85bn bail-out from the IMF and EU in order to shore up the country’s balance sheet. A modest return to growth was seen in 2011, but Ireland’s woes very much continue to be felt and a stringent four-year National Recovery Plan will be in force until 2014.
GDP:
US$195.9 billion (2011).
Main exports:
Machinery and equipment, computers, chemicals, pharmaceuticals, and animals.

Most of Ireland was covered with ice until the end of the last ice age over 9,000 years ago. Sea-levels were much lower and Ireland, and its neighbor Britain, were a part of continental Europe rather than being islands. Mesolithic stone age inhabitants arrived some time after 8,000 BC. Agriculture was introduced around 4,500 to 4,000 BC when sheep, goats, cattle and cereals were imported from the Iberian peninsula. The Chronicle of Ireland records that in 431 AD Bishop Palladius arrived in Ireland on a mission from Pope Celestine I to minister to the Irish "already believing in Christ." The same chronicle records that Saint Patrick, Ireland's patron saint, arrived a year later. There has always been a debate about these missions but it is likely that they actually both took place, causing the older druid traditions to collapse in the face of the new religion.
In the 7th century AD, a concept of national kingship gradually became articulated through the concept of a High King of Ireland. The High King was chosen amongst other lower kings, which still ruled their own little Kingdoms. In the 12th century the Norman invasions took place. The Norman rulers and the native Irish elites intermarried and the areas under Norman rule became Gaelicised. In 1199, John became the King of England and the Lord of Ireland. The Irish parliament passed the Statutes of Kilkenny in 1367. These were laws designed to prevent the assimilation of the Normans into Irish society by requiring English subjects in Ireland to speak English, follow English customs and abide by English law.
The English Crown control remained relatively unshaken in the area around Dublin known as The Pale. English rule of law was reinforced and expanded, however, in the sixteenth century leading to the Tudor reconquest of Ireland. A near complete conquest was achieved by the turn of the seventeenth century following the Nine Years' War and the Flight of the Earls. This control was further consolidated during the seventeenth century. This century witnessed English and Scottish colonization in the Plantations of Ireland, the Wars of the Three Kingdoms and the Williamite War. The religious struggles of the 17th century left a deep sectarian division in Ireland. Religious allegiance now determined the perception in law of loyalty to the Irish King and Parliament.
The Great Famine of the 1840s caused the deaths of one million Irish people. Over a million more emigrated to escape it. By the end of the decade, half of all immigration to the United States was from Ireland. The 19th and early 20th century saw the rise of modern Irish nationalism, primarily among the Roman Catholic population. After a couple of failed attempts Ireland became independent in 1920, while at the same time Northern Ireland was created. Disagreements over the provisions of the treaty led to a split in the nationalist movement and a subsequent civil war. The civil war officially ended in May 1923. In 1937, the Irish Free State was given full sovereignty within the Commonwealth, and remaining links with Britain dissolved.

Ireland is an island in Western Europe, located directly west of the United Kingdom. It shares international borders with the United Kingdom because of Northern Ireland. It has a total area of 84,421 km2 (32,595 sq mi) and is separated from Great Britain by the Irish Sea and from mainland Europe (France) by the Celtic Sea. Located in the northwest of Europe it also borders the Atlantic Ocean to the western coastlines. The main geographical features of Ireland are low central plains surrounded by a ring of coastal mountains. The highest peak is Carrauntoohil at 1,041 metres (3,415 feet) above sea level. The western coastline is rugged, with many islands, peninsulas, headlands and bays. The island is bisected by the River Shannon, which at 386 kilometres is the longest river in Ireland and flows south from County Cavan in Ulster to meet the Atlantic just south of Limerick. There are a number of sizeable lakes along Ireland's rivers, of which Lough Neagh is the largest. Together, the landscape and the offshore waters provide a good habitat for a wide variety of wildlife. Seals and dolphins are spotted regularly, while the Cork coast even offers the chance to whale-watch over the summer months

Social conventions:
The Irish are renowned as an affable, easy-going people, whose conversation is liberally dosed with humour, irreverence and - if you listen carefully - a beal bocht, an Irish expression that translates as 'the poor mouth'. It refers to a kind of modesty where the speaker is careful to talk themselves down and never reveal how well he or she is actually doing. In short, the Irish don't really like a show-off.
Arguably the best place to observe and engage with the Irish is in the pub, still a centre of social interaction in Ireland, especially in smaller communities throughout the country. A meal in an Irish home is usually a substantial affair and guests will eat well. Dinner is the main meal of the day and is now eaten in the evening. Casual dress is widely acceptable, but people will often dress up for smart restaurants and social functions. Handshaking is usual, and modes of address will often be informal. Smoking is banned in all public enclosed/working spaces, including pubs, bars and restaurants.
Language in Ireland
Irish (Gaelic) is the official language. Estimates vary on the number of people who genuinely speak it as a first language (somewhere between 50,000 and 100,000), but English is the language of the majority.