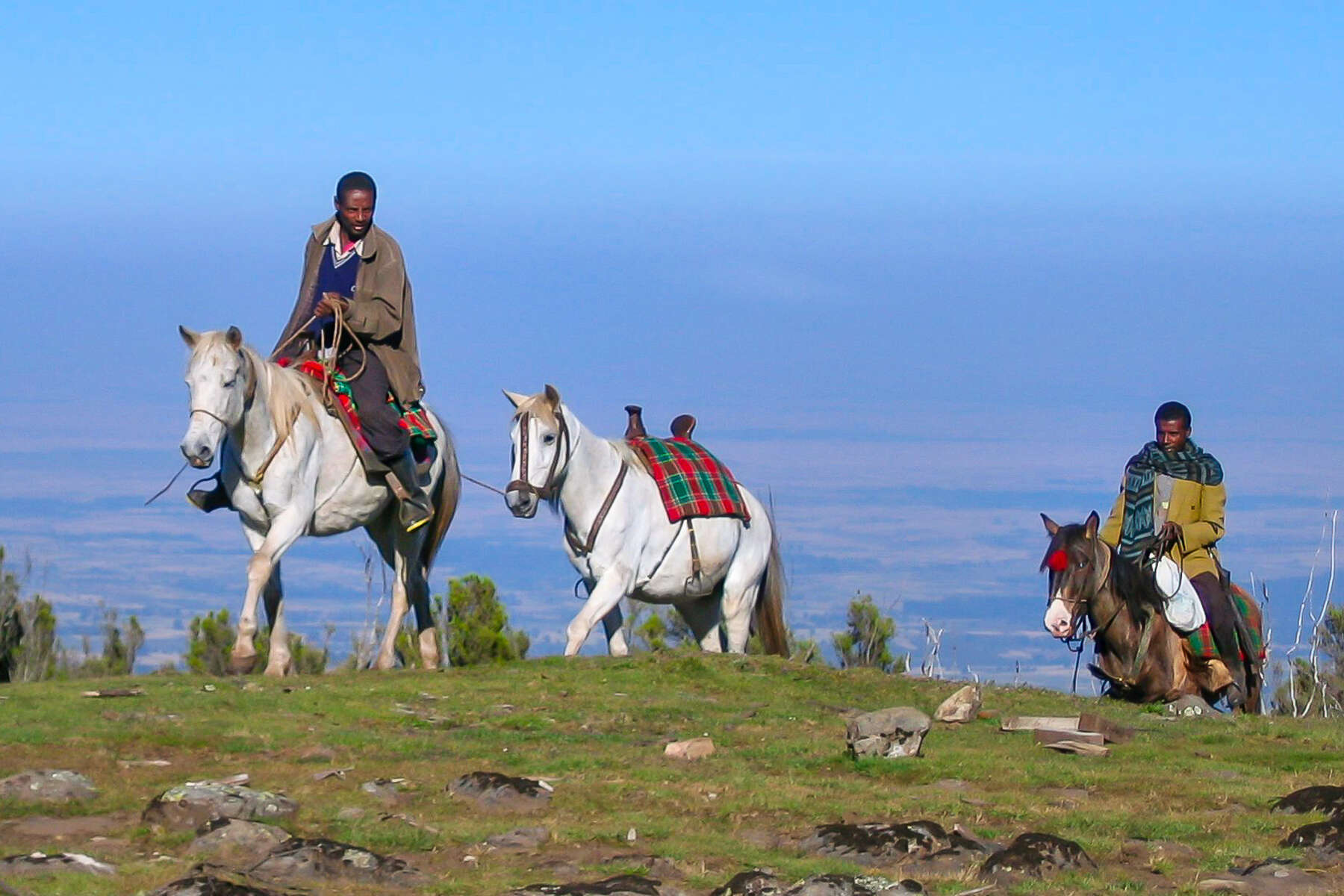 Explore a country steeped in history, discover its endemic flora and fauna and ride local Oromo horses on an equestrian journey across Ethiopia. From the Rift Valley to the jagged rock formations of the Bale mountains, and the medieval cave churches of Lalibela, Ethiopia is full of surprises. Adventurous riders will find in this country, which is also the cradle of mankind, a hidden gem set right in the heart of Africa. Our riding expeditions in Ethiopia will take you across high plateaus, from rugged canyons to tropical forests, with the chance to meet the last of the Oromo shepherds a catch a glimpse of the elusive Abyssinian wolf.
See all our trips 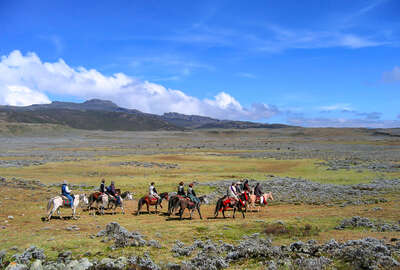 UK CITIZENS (citizens of other countries please contact us):
You will need a visa to enter Ethiopia. E-visas can be purchased in advance from the Ethiopian Immigration website. Visas on arrival are also available for tourists at Addis Ababa (Bole) International airport, at a cost of approximately $US50 for 1 month and $US75 for 3 months. It’s recommended that you bring US$ cash to pay for this. All other categories of visitor must get a visa from the Ethiopian Embassy closest to their place of legal residence before travelling. The penalty for overstaying your tourist visa is $US10 per person per day. If you overstay you will have to pay your fine in full before you are able to leave Ethiopia.

Your passport should be valid for a minimum period of 6 months from the date of entry into Ethiopia. Make sure you have two blank pages in your passport on arrival.

There are a number of hospitals in Addis Ababa but only private hospitals offer a reasonable standard of basic care for minor health problems. Dentistry options are especially lacking. Ambulance services are also limited. Outside the capital medical facilities remain extremely poor. You should carry a comprehensive medical pack when travelling out of Addis Ababa. Make sure you have adequate travel health insurance and accessible funds to cover the cost of any medical treatment abroad, evacuation by air ambulance and repatriation. You should contact your insurance / medical assistance company promptly if you are referred to a medical facility for treatment.

UK health authorities have classified Ethiopia as having a risk of Zika virus transmission. For more information and advice, visit the National Travel Health Network and Centre.

Malaria is common in areas of the country below 2,000 metres above sea level. Addis Ababa sits at 2,400 metres but a number of sites popular with tourists are below 2,000.

In 642 the Muslims conquered the whole coast of North Africa converting it to Islam. Ethiopia however, remained Christian but it was cut off from Europe by the Muslims.

In the middle Ages Ethiopia flourished and the famous church of St George was built around 1200. On the 16th century the country declined in power and importance but survived. At that time the Portuguese reached Ethiopia by sea.

In the late 19th century the Europeans divided Africa between them. However, when the Italians tried to invade Ethiopia in 1896, they were defeated by the locals at the battle of Adwa.

In 1935 the Italians tried invading once again and eventually overran Ethiopia. In 1941 the British liberated the country and emperor Haile Selassies restored his throne.

6 years later Communists seized power in Ethiopia and the emperor was deposed and murdered. The communist leader Mengistu introduced a tyrannical regime.

In 1991 the communist regime was overthrown and in 1993 Eritrea became independent. A new constitution was introduced in 1994 and elections were held in 1995.

During the early 21st century the economy of Ethiopia began to grow rapidly. Even though it still remains a poor country, there is reason to remain optimistic about its future.

A major portion of Ethiopia lies on the Horn of Africa, which is the easternmost part of the African landmass. Its topography ranges from deserts along its eastern border, the Choke and Mandebo mountains ranges in its central core, and tropical forests in the southern reaches.

Ethiopia is dominated by a vast highland complex of mountains, plateaus and lakes, all divided by the Great Rift Valley that's surrounded by lowlands and steppes.

Not to be missed are the toothy-edged Simien Mountains to the northeast of Gonder, one of UNESCO's World Heritage Sites.

Lake Tana in the north is the source of the Blue Nile.

Ethiopia has a large variety of indigenous plant and animal species. In some areas, the mountains are covered with shrubs such as pyracantha, jasmine, poinsettia, and a varied assortment of evergreens. Caraway, carcade, coriander, incense, myrrh, and red pepper are common. The lakes in the Great Rift Valley region abound with numerous species of birds, and wild animals are found in every region. Among the latter are the lion, elephant, bush pig, gazelle, antelope, ibex, kudu, dik-dik, oribi, reed buck, wild ass, zebra, hyena, baboon, and numerous species of monkey.