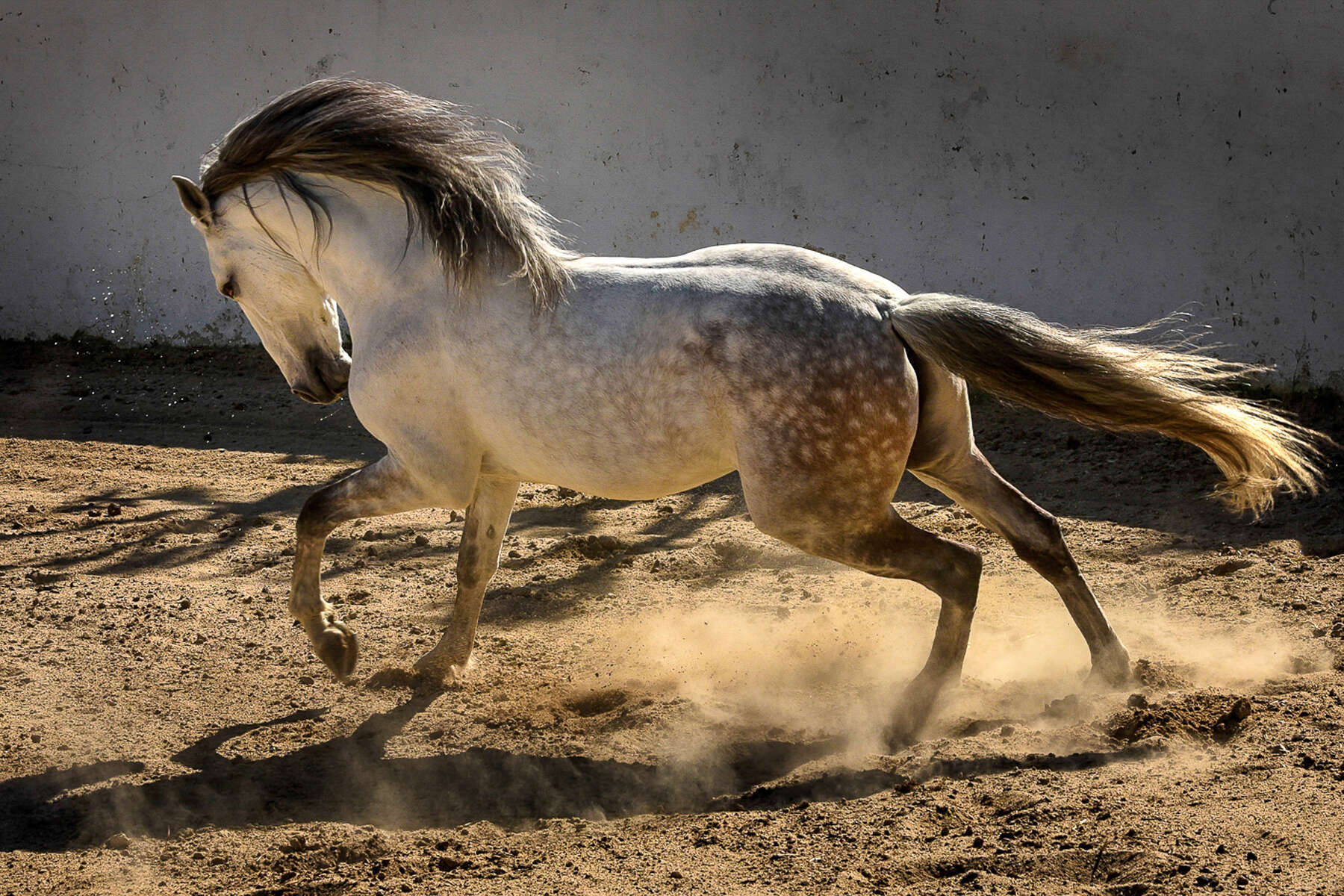 The Lusitano horse is closely related to the Andalucian and both breeds developed on the Iberian peninsula, and in fact both were considered Andalucians until the 1960's. Horses have been present on the Iberian peninsula since 20,000 BC and the region was renowned for its war horses. When the region was invaded by Muslims in 711 AD they brought their Barb horses and the resulting crosses were ideal for war, bull fighting and dressage. In 1966 the Portugese and Spanish stud books split and the Lusitano was officially recognised. You can ride Lusitano horses on most of our riding holidays in Portugal.

The Alter Real strain of Lusitano can only be bred at the Alter Real State Stud in the Alentejo region of Portugal. This stud was founded by the royal family and the Portugese School of Equestrian Art exclusively uses Alter Real horses in its performances. This strain was developed from 300 Iberian mares imported from Spain in the 1700's. During the early 19th century, when Napolean invaded Spain, the Alter Real strain deteriorated as Arabian, Thoroughbred and Warmbloods were introduced. The later re-introduction of Spanish blood improved the breed but they almost faced extinction in the early 20th century when the Portugese monarchy were renounced and the stud was disbanded, with stallions being gelded and the records burnt. A specialist in Iberian breeds, Ruy d'Andrade, rescued two stallions and several mares and was able to re-establish the herd, handing them over to the Portugese Ministry of Agriculture in 1942 when the stud re-opened. The Portugese state still maintains ownership of the stud today. We include a visit to the Alter Real stud on our Kingdom of the Lusitano trail ride.

Lusitanos have a powerful neck and hindquarters with a high stepping gait. They are heavily muscled, intelligent and willing horses with agile and elevated movement. They stand approximately 15.2 hands although can be over 16 hands high. Lusitanos differ from Andalucians through having a more sloping croup, a lower set tail and a more convex head profile. Whilst they can be any solid colour, grey, bay or chestnut is most common and those from the Alter Real strain can only be bay.
Lusitanos are still used in bloodless bullfighting today, where the bull is not killed and it is considered a disgrace to the rider if the horse is injured. The calm and agile nature of the breed makes them ideal in front of a bull, and it is these characteristics which also make them popular in dressage. In 2006 the entire Portugese dressage team rode Lusitano's at the World Equestrian Games - at the same competition, a Belgian took the gold medal for driving four-in-hand with a team composed solely of Lusitano's, proving the versatility of the breed. For a real equestrian holiday combining riding beautiful Lusitanos and a cultural experience, you should consider our "Classical dressage and Golega fair" programme.