Get in the saddle in New Zealand

At the edge of our world, New Zealand is on many a rider's bucket list. Shaped by the Maori culture, the "Land of the Long White Cloud" is divided between two islands (North and South), that differ greatly from one another in terms of climate, scenery, fauna and flora. The North Island is known for its turquoise waters and lush tropical flora. The South Island offers breath-taking scenery and spectacular high country landscapes, from ancient glaciers to hidden fjords, pristine mountain lakes and windswept plains. A trail ride in New Zealand is an incredible experience for riders looking to get of the beaten tracket.
See all our trips 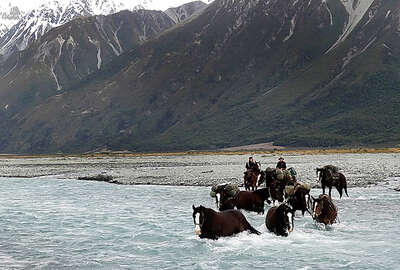 PASSPORTY VALIDITY:
Your passport should be valid for a minimum period of one month from the date of exit from New Zealand.

ELECTRONIC TRAVEL AUTHORITY (ETA):
From 1 October 2019, British nationals travelling by air or cruise and entering New Zealand without a visa (tourists) will need to hold an ETA before travelling to New Zealand. An ETA will last up to 2 years and cost NZD 9 for mobile application requests and NZD 12 for web browser requests. Holders of valid New Zealand visas (both resident and temporary) will continue to be able to enter New Zealand without an ETA. Any queries about the ETA should be directed to ETA.information@mbie.govt.nz

INTERNATIONAL VISITOR CONSERVATION AND TOURISM LEVY (IVL):
The IVL will be introduced alongside the ETA and will cost NZD 35. Once paid the IVL will last as long as the ETA is valid. It is payable at the same time as the ETA.

The link below has further information on the requirements – including transit passengers:
https://www.immigration.govt.nz/new-zealand-visas/apply-for-a-visa/about-visa/nzeta

UK EMEGENCY TRAVEL DOCUMENTS:
UK Emergency Travel Documents (ETDs) are valid for entry into New Zealand when accompanied by a permanent residence, work or study visa. ETDs are accepted for holiday-makers as long as New Zealand is not the final destination. ETDs are also accepted for airside transit and exit from New Zealand.

QUARANTINE AND BIO SECURITY:
New Zealand has very strict bio-security regulations. It is illegal to import most foodstuffs (meat and meat products, honey, fruit, dairy produce) and strict penalties are handed out to those breaking these rules. Take care when importing wood products, golf clubs, footwear, tents, fishing equipment and items made from animal skin. The immigration arrivals card has full details. If in doubt, declare items to a Ministry of Agriculture official or dump them in one of the bins available at the airport. Failure to comply with these regulations can result in a heavy fine of up to $100,000 or imprisonment.

Medication:
There are some restrictions on bringing medication into New Zealand. Visit the New Zealand Customs website for more information. If you arrive in New Zealand with any prescription medicines, you must declare it on your passenger arrival card.
Yellow fever certificate requirements:
If you’re travelling to the island of Niue, check whether you need a yellow fever certificate by visiting the National Travel Health Network and Centre’s TravelHealthPro website.
For more information you can always visit : https://www.gov.uk/foreign-travel-advice/new-zealand/entry-requirements

Electricity is supplied throughout New Zealand at 230/240 volts (50 hertz), although most hotels and motels provide 110 volt AC sockets (rated at 20 watts) for electric razors only.

British visitors will require an adapter.

Please be sure to check your favorite currency exchange converter before your trip.

New Zealand was the last large and habitable place in the world to be discovered.

MAORI SETTLEMENT
The first to arrive in the island where the ancestors of Maori. The settlers probably arrived from Polynesia between 1200 and 1300 AD. They discovered New Zealand as they explored the Pacific navigating by ocean currents and stars.

THE FIRST EUROPEANS AND INDEPENDENCE
- The first European to arrive in New Zealand was the Dutch explorer Abel Tasman in 1642.
- A long time passed (127 years) before New Zealand was visited by another European, Captain James Cook in 1769.
- European whalers and sealers started visiting regularly and then came traders.
- In 1830 the British government was being pressured to pre-empt the French who were considering New Zealand as a potential colony.
- The treaty of Waitangi was signed between the Maori chiefs and the British Crown in 1840. The treaty looks to ensure the rights of both Maori and Pakeha.
- In the 1860s war broke out in the North Island between the Maori and the European settlers. In the South Island however, settlements prospered thanks to sheep farming and Gold being discovered.
- In 1893, New Zealand became the first country in the world to grant all women the right to vote.
- 1907 New Zealand became an independent dominion.

WORLD WARS
- WWI : New Zealand served overseas and in 1915 established the tradition of ANZAC (Australian and New Zealand Army Corps)
- WWII: New Zealand troops fought in support of the UK, however it was the US that protected New Zealand against Japan during the war in the Pacific.

New Zealand is an Archipelago of around 600 islands located in the south-western Pacific Ocean. It has two main islands the North Island and the South Island.

The North Island has a 'spine' of mountain ranges running through the middle, with farmland on both sides. The central North Island is dominated by the Volcanic Plateau, an active volcanic and thermal area. On the other hand, the South Island has the massive Southern Alps as well as the flat Canterbury Plains.

The country is located about 2,000 kilometres south-east of Australia across the Tasman Sea. Its closest neighbours are found to the north being New Caledonia, Tonga and Fiji.

Like other regions separated from the rest of the world, New Zealand has developed a distinct flora. About 75% of the native flora is unique, and it includes some of the world's oldest plant forms. However, the flowering plants, conifers, ferns, lycopods, and other vascular tracheophytes that constitute much of the land vegetation do show affinities with plants of the Malayan region, supporting the theory of an ancient land bridge between the two regions. More than 250 species are common to both Australia and New Zealand. The Antarctic element, comprising more than 70 species related to forms in the flora of South America and the Southern Ocean islands, is of great interest to botanists. The kauri pine, now found only in parts of the North Island, for more than a century has been world famous for its timber. Tussock grass occurs on all mountains above the scrub line and over large areas in the South Island.

Apart from seals and two species of bats, New Zealand has no indigenous land mammals. Some of the land mammals introduced to New Zealand have increased their population in uncontrolable numbers, you can find plenty of rabbits, deer, pigs (now wild), and possums. Sea mammals include whales and dolphins.

There is a great diversity of birds, some 250 species in all, including breeding and migratory species. Among the flightless birds the most interesting is the kiwi, New Zealand's national symbol and the only known bird with nostrils at the tip of the bill instead of at the base. Other characteristic birds are the kea, a mountain parrot, and the tui, a beautiful songbird. All but one of the genera of penguins are represented in New Zealand. Several species of birds, the most famous being the Pacific godwit, migrate from breeding grounds in the Arctic Circle to spend spring and summer in New Zealand.

English is the predominant language and the official language of New Zealand. Almost the entire population speak it as a native speaker or proficiently as a second language. The New Zealand English dialect is very similar to Australian English in pronunciation.

The Maori language of the indigenous Maori people is the second most spoke language in the country.