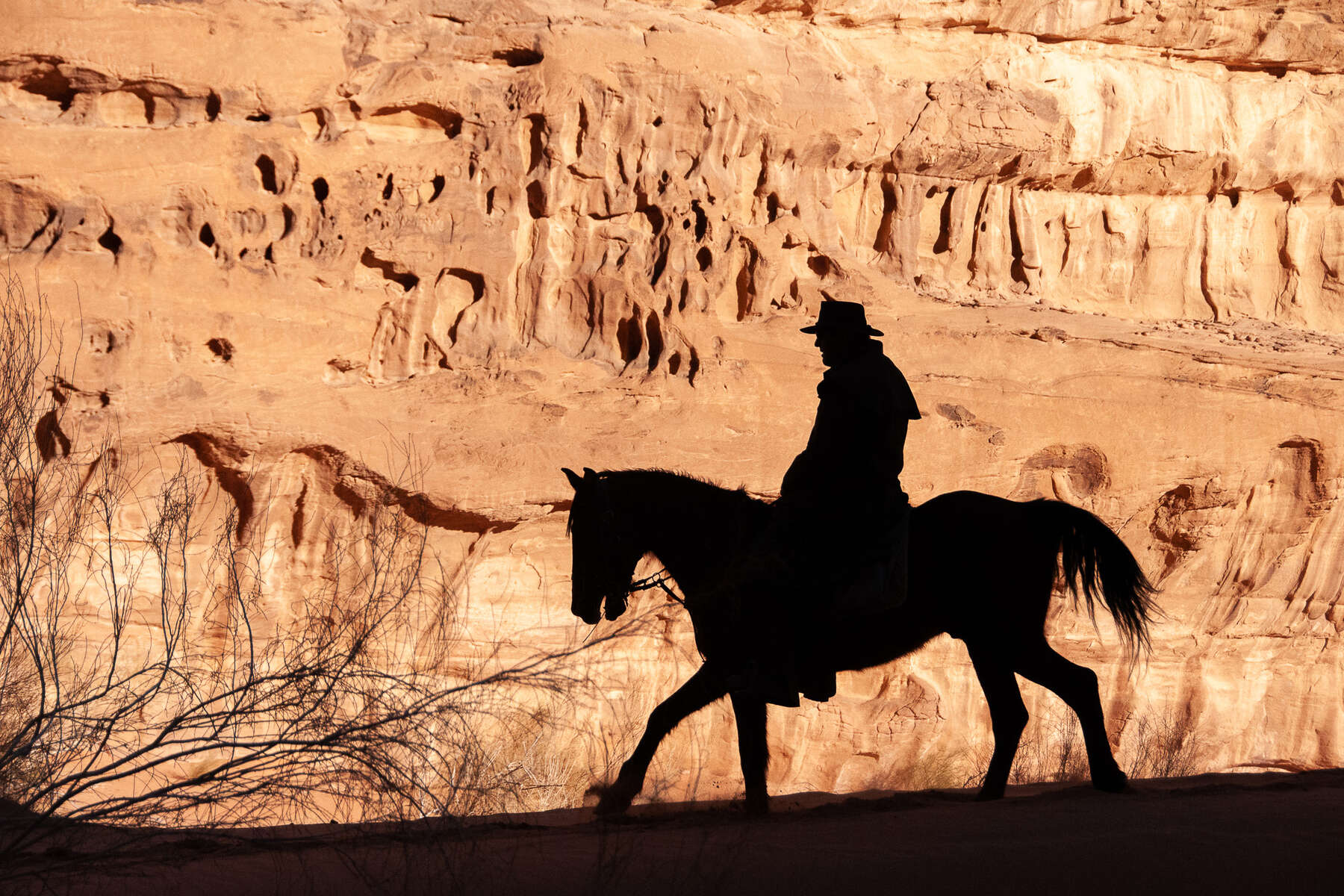 Can you imagine yourself cantering across the rose pink sands of the Wadi Rum desert in the footsteps of Lawrence of Arabia? A riding holiday in Jordan is to live the life of a Bedouin - sleep under the stars with your trusty Arabian mare quietly eating her alfalfa just a few feet away. Visit the ancient Nabatean city of Petra and experience the lowest point on earth - the Dead Sea. A riding holiday in Jordan is like three holidays in one - amazing riding, culture and relaxation.
See all our trips 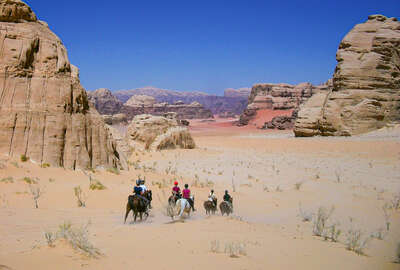 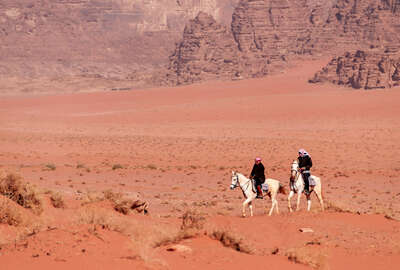 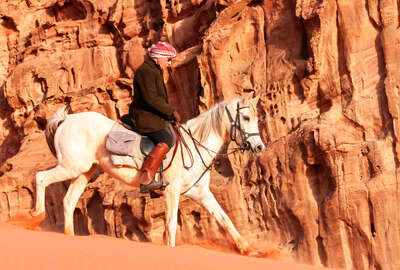 To enter Jordan, a passport valid for six months is required by all British, American, Canadian and EU nationals.
Visas: A single-entry visa obtained on arrival is required to enter Jordan.

Nationals not referred to above are advised to contact the embassy to check visa requirements for Jordan.

The national currency is the Jordanian dinar (JD), divided into 1,000 fils and 100 piastres (or qirsh). Coins come in denominations of ¼, ½, 1, 5 and 10 piastres and banknotes in 1, 5, 10, 20, and 50 dinar denominations. The currency rate is fixed at 0.71 JD per US$ (or 1.41 dollars per dinar).ATMs can be found in most of the larger towns and throughout Amman. Jordan is a cash society. In most places (other than top-end hotels and restaurants) the only acceptable method of payment is cash dinars. Dollars and other foreign currencies are generally not accepted. But Jordan is also very safe: crime is exceptionally low, and you do not need to worry about carrying cash with you. Scams are few. You may find yourself paying slightly over the odds for taxis or guide services, but real rip-offs are surprisingly rare.

One exception is in and around the tourist town of Petra – here, there is a higher-than-usual prevalence of touts and cheats trying to overcharge and under-deliver. Be more on your guard here than elsewhere.

Jordan's international country code is 962. The emergency numbers include 112 and 911, you can use them both.
Time Zone GMT+2

Jordan's agricultural sector produces tomatoes, citrus fruit, cucumbers, watermelons, aubergines and wheat, mostly grown in the fertile ground along the Jordan Valley. Phosphate mining and potash extraction are the traditional industries; petroleum refining, chemical manufacturing and the production of metals and minerals also contribute to this sector. The service sector accounts for around two-thirds of total output and covers wholesale and retail trading, finance, transport and tourism.
Jordan is a member of various pan-Arab economic bodies, notably the Council of Arab Economic Co-operation and the Arab Monetary Fund. Jordan also belongs to the World Trade Organization (WTO) and has a free trade accord with the USA and an association agreement with the EU.
Employment is proving a challenge for the government and many Jordanian workers have moved abroad in search of employment - a trend the government is trying to reverse. To help improve productivity and make Jordan a more attractive country for foreign investment, the government has reduced its debt-to-GDP ratio. A major challenge now facing Jordan is reducing dependence on foreign grants.
The working week is Sunday to Thursday. Friday, the Muslim holy day, is a day off. Most businesses also close on Saturdays, though some businesses may be open. During the Muslim fasting month of Ramadan, there is no lunch break and work will end around 1400 or 1500

The area encompassed by the modern kingdom of Jordan only had borders drawn around it for the first time in the 20th century. Before then, it was generally seen only as a small part of a larger regional concern, principally Syria.
Jordan was one of the locations where Stone Age hunter-gatherers settled for the first time, building villages and domesticating animals. Settlement expanded during the Bronze Age (roughly 3000-1200 BC), when Jordan also features in the Old Testament record: Sodom and Gomorrah were towns probably located on Jordan’s side of the Dead Sea, destroyed in some kind of volcanic cataclysm, and the Israelites wandered through Jordan following their Exodus from Egypt.
During the Iron Age (1200-332 BC), Jordan clashed with the Israelites, then the Assyrians, Babylonians and Persians, finally coming under Greek control. Around this time, an Arabian tribe known as Nabateans settled in Jordan, naming their capital Petra. They became fabulously wealthy, controlling the lucrative trade in frankincense and spices between Arabia and Europe.
In 106 AD the Romans absorbed the Nabatean kingdom, building new roads across Jordan, beautifying cities and fortifying the desert frontier. By the 4th century, Roman security was beginning to crumble. Christianity was adopted and Jordan became a centre for mosaic art, with fine mosaics adorning many new churches in the region.
Islamic armies conquered the region in 636. Jordan flourished under the Umayyad dynasty (661-750), who ruled from Damascus, but when power shifted east to the Baghdad-based Abbasid dynasty, Jordan fell into neglect. The invading European Christian armies of the Crusaders briefly occupied Jordan in the 12th century, but under the Ottomans Jordan became a backwater.
Following anti-Muslim pogroms in Russia in the 1870s, Circassian refugees settled in Jordan – then largely deserted – re-founding Amman and ushering in Jordan’s modern history. After the Ottoman Turks were repulsed during the Great Arab Revolt of 1916-17, Jordan won independence, first as a British-controlled emirate in 1923 under Abdullah I – a monarch from the Hashemite family of Mecca – then in 1946 as a fully-fledged independent kingdom.
Under Abdullah I (died 1951) and then King Hussein (died 1999), Jordan has taken in huge number of refugees from conflicts around the Middle East – first Palestinian, then Iraqi and now, under King Abdullah II, Syrian – which has shaped the national character. As one of the West’s key allies in the Arab world, at peace with Israel, and yet closely bound into regional politics, with strong links to Iraq and Saudi Arabia, Jordan must play one of the trickiest fence-sitting roles in world politics.

Jordan borders Israel (and the Palestinian National Authority Region), the Syrian Arab Republic, Iraq and Saudi Arabia. At 400m (1,300ft) below sea level, the Dead Sea, in the northwest of Jordan, is the lowest point on earth and one of the country's most distinctive features; the Red Sea, to which Jordan has a narrow access at Aqaba in the southwest, is teeming with life.
The River Jordan flows into the Dead Sea, and there are plans to build a canal - the Two Seas Canal (or the Dead-Red Canal) - that would link the Dead Sea to the Red Sea. Capital Amman perches above the Dead Sea Depression, at a height of 800m (2,625ft), surrounded to the north by undulating hills, and by desert escarpments to the south, on which graze the sheep and goat herds of nomadic tribes.
Jordan's northeastern flank is flat desert sprinkled with oases, while the spectacular southeastern desert is characterised by wind-eroded forms and brightly coloured sandstone cliffs.

Social conventions:
Handshaking is the customary form of greeting. Jordanians are proud of their Arab culture and hospitality is a matter of great importance. Visitors are made to feel very welcome and Jordanians are happy to act as hosts and guides, keen to inform tourists about their traditions and culture. Islam always plays an important role in society. Arabic coffee will often be served continuously during social occasions. To signal that no more is wanted, slightly tilt the cup when handing it back, otherwise it will be refilled. If invited for dinner, a small gift is customarily given. Women are expected to dress modestly and beachwear must only be worn at private beaches or poolside.

"Lawrence of Arabia" refers to the British soldier T.E.Lawrence who wrote the autobiographical book Seven Pillars of Wisdom whilst serving as a liason officer with rebel forces during the Arab Revolt against the Ottoman Turks of 1916-1918.

Lawrence was based in the Wadi Rum as a member of the British forces and with the support of Emir Faisal and his tribesmen, carried out attacks on the Ottoman forces from Aqaba in the south to Damascus in the north. Many sites in the Wadi Rum have been named after him and the famous rock formations near the entrance are now known as the Seven Pillars.

The title "Seven Pillars of Wisdom" actually comes from the Book of Proverbs and Lawrence had intended to write a book about seven great cities of the Middle East, but when war broke out he liked the name so much that he kept it for his autobiography.

Our trail ride in Jordan visits many of the sites attributed to Lawrence: Lawrence's house, Lawrence's spring and the Seven Pillars being some of them.