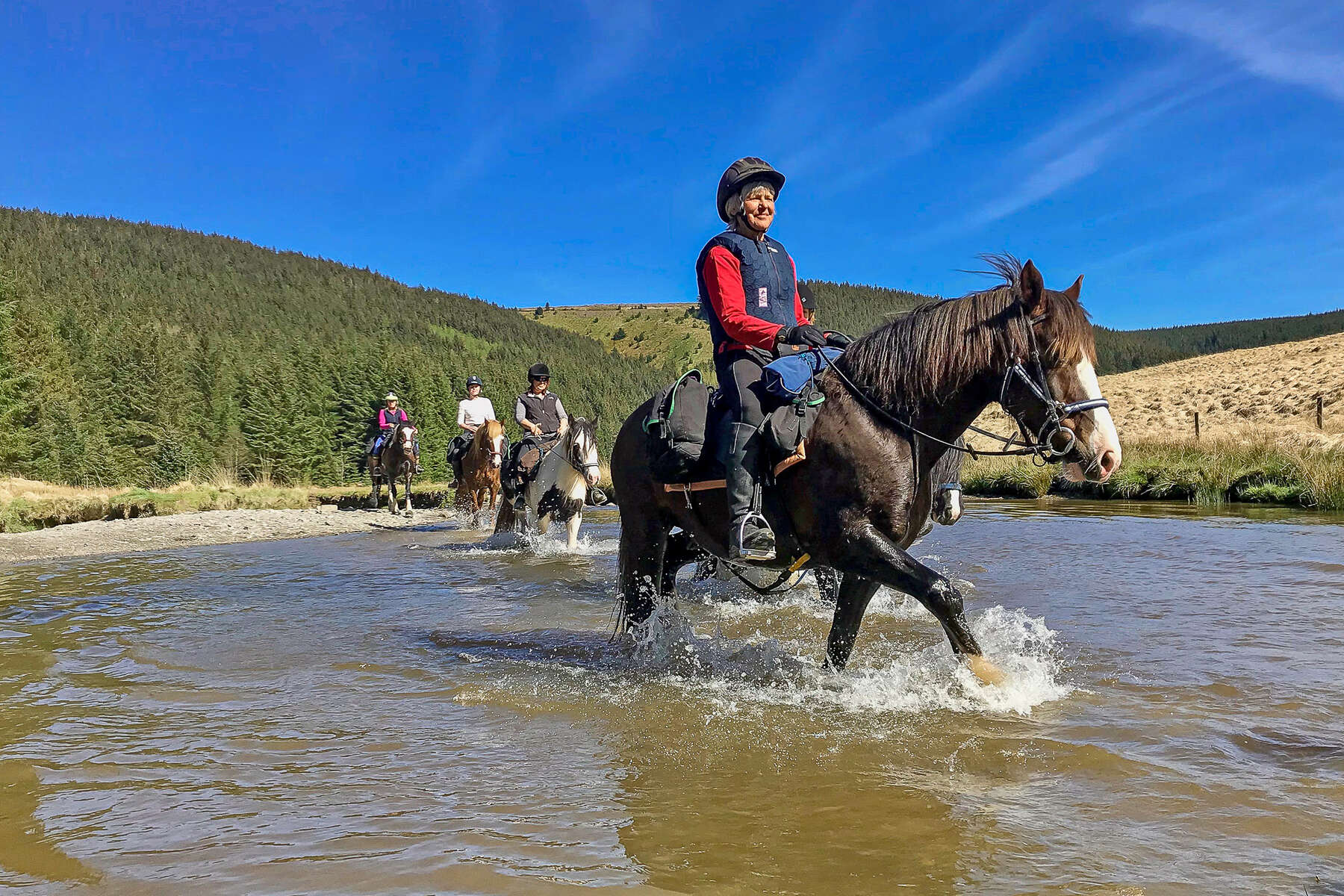 Embark on a riding holiday in Wales, in the UK

Discover Wales, in the United Kingdom, on a riding holiday. Known for its rugged coastline, beautiful national parks and distinctive Celtic culture, this small, secluded country also offers excellent opportunities for good riding. There are many wonderful reasons to visit and the outdoor lover will find a wide variety of activities or outdoor pursuits to complement their horseback adventures! After a day in the saddle, enjoy the hospitality of the Welsh people and visit the local pubs, or "public houses", for a pint or two!
See all our trips 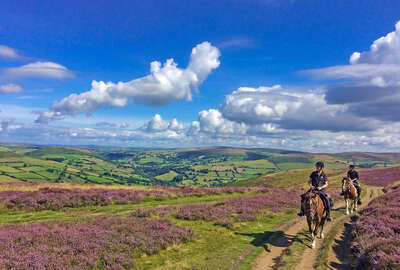 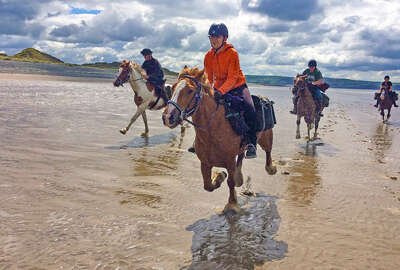 Your passport must be valid for the duration of your stay in the United Kingdom (at least six months remaining validity is required for onward travel to many other countries).

You should check with your local travel advisory as entry requirements depend from your nationality.

You should be up to date on routine vaccinations while traveling to any destination. Some vaccines may also be required for travel.

In Wales the standard voltage is 230 V and the frequency is 50 Hz. In Wales the power plugs and sockets are of type G (3 prongs).

The origins of the United Kingdom can be traced to the time of the Anglo-Saxon king Athelstan, who in the early 10th century ce secured the allegiance of neighbouring Celtic kingdoms and became “the first to rule what previously many kings shared between them,” in the words of a contemporary chronicle. Through subsequent conquest over the following centuries, kingdoms lying farther afield came under English dominion. Wales, a congeries of Celtic kingdoms lying in Great Britain’s southwest, was formally united with England by the Acts of Union of 1536 and 1542. Scotland, ruled from London since 1603, formally was joined with England and Wales in 1707 to form the United Kingdom of Great Britain. (The adjective “British” came into use at this time to refer to all the kingdom’s peoples.) Ireland came under English control during the 1600s and was formally united with Great Britain through the Act of Union of 1800. The republic of Ireland gained its independence in 1922, but six of Ulster’s nine counties remained part of the United Kingdom as Northern Ireland. Relations between these constituent states and England have been marked by controversy and, at times, open rebellion and even warfare. These tensions relaxed somewhat during the late 20th century, when devolved assemblies were introduced in Northern Ireland, Scotland, and Wales. Nonetheless, even with the establishment of a power-sharing assembly after referenda in both Northern Ireland and the Irish republic, relations between Northern Ireland’s unionists (who favour continued British sovereignty over Northern Ireland) and nationalists (who favour unification with the republic of Ireland) remained tense into the 21st century.


Famed for its strikingly rugged landscape, the small nation of Wales—which comprises six distinctive regions—was one of Celtic Europe’s most prominent political and cultural centres, and it retains aspects of culture that are markedly different from those of its English neighbours. Although Wales was shaken by the decline of its industrial mainstay, coal mining, by the end of the 20th century the country had developed a diversified economy, particularly in the cities of Cardiff and Swansea, while the countryside, once reliant on small farming, drew many retirees from England. Tourism became an economic staple, with visitors—including many descendants of Welsh expatriates—drawn to Wales’s stately parks and castles as well as to cultural events highlighting the country’s celebrated musical and literary traditions.

Wales is bounded by the Dee estuary and Liverpool Bay to the north, the Irish Sea to the west, the Severn estuary and the Bristol Channel to the south, and England to the east. Anglesey (Môn), the largest island in England and Wales, lies off the northwestern coast and is linked to the mainland by road and rail bridges. The varied coastline of Wales measures about 600 miles (970 km). The country stretches some 130 miles (210 km) from north to south, and its east-west width varies, reaching 90 miles (145 km) across in the north, narrowing to about 40 miles (65 km) in the centre, and widening again to more than 100 miles (160 km) across the southern portion.

Glaciers during the Pleistocene Epoch (about 2,600,000 to 11,700 years ago) carved much of the Welsh landscape into deeply dissected mountains, plateaus, and hills, including the north-south–trending Cambrian Mountains, a region of plateaus and hills that are themselves fragmented by rivers. Protruding from that backbone are two main mountain areas—the Brecon Beacons in the south, rising to 2,906 feet (886 metres) at Pen y Fan, and Snowdonia in the northwest, reaching 3,560 feet (1,085 metres) at Snowdon, the highest mountain in Wales. Snowdonia’s magnificent scenery is accentuated by stark and rugged rock formations, many of volcanic origin, whereas the Beacons generally have softer outlines. The uplands are girdled on the seaward side by a series of steep-sided coastal plateaus ranging in elevation from about 100 to 700 feet (30 to 210 metres). Many of them have been pounded by the sea into spectacular steplike cliffs. Other plateaus give way to coastal flats that are estuarine in origin.

Wales consists of six traditional regions—the rugged central heartland, the North Wales lowlands and Isle of Anglesey county, the Cardigan coast (Ceredigion county), the southwestern lowlands, industrial South Wales, and the Welsh borderland. The heartland, which coincides partly with the counties Powys, Denbighshire, and Gwynedd, extends from the Brecon Beacons in the south to Snowdonia in the north and includes the two national parks based on those mountain areas. To the north and northwest lie the coastal lowlands, together with the Lleyn Peninsula (Penrhyn Llŷn) in Gwynedd and the island of Anglesey. To the west of the heartland, and coinciding with the county of Ceredigion, lies the coastline of Cardigan Bay, with numerous cliffs and coves and pebble- and sand-filled beaches. Southwest of the heartland are the counties of Pembrokeshire and Carmarthenshire. There the land rises eastward from St. David’s Head, through moorlands and uplands, to 1,760 feet (536 metres) in the Preseli Hills. South Wales stretches south of the heartland on an immense but largely exhausted coalfield. To the east of the heartland, the Welsh border region with England is largely agricultural and is characterized by rolling countryside and occasional wooded hills and mountainous moorland.

Whether it’s a staycation or your first time visiting Wales, it’s a fantastic destination for a horseback holiday. Our holidays are similar in offering and allow you to discover the beautiful Welsh landscape onboard a mixture of well-bred, hardy horses that are native to the UK, but differ in length.
For a first taste of what Wales has to offer, we recommend you choose our equestrian short break “The Welsh Prince Trail” where you can enjoy a four-day and three-night trail to of idyllic Welsh countryside.
Those of you with an adventurous streak may choose the “Border to Coast Trail”. This expedition on horseback will give you a taste of real adventure as there is no back-up vehicle, meaning you will carry all of your belongings in expedition bags across the Welsh landscapes.