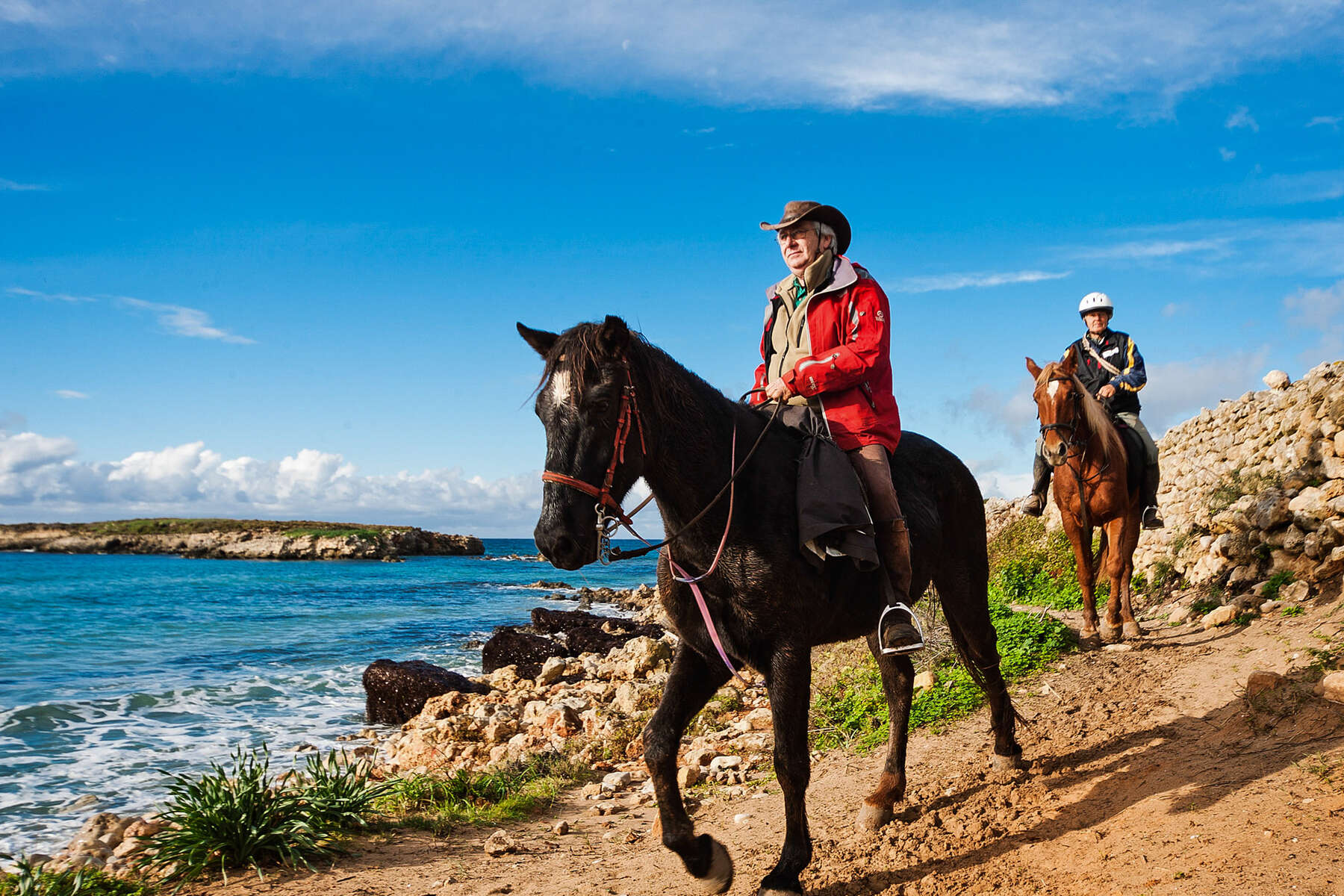 Spain is famous for the Andalucian horse - originally bred for bull fighting but nowadays an ideal companion for dressage or trail rides. Horse riding holidays in Spain offer something for everyone - high class dressage tuition near Seville, trail rides through the beautiful Sierra Nevada or Gredos Mountains, or spectacular beach rides on the island of Menorca.
See all our trips 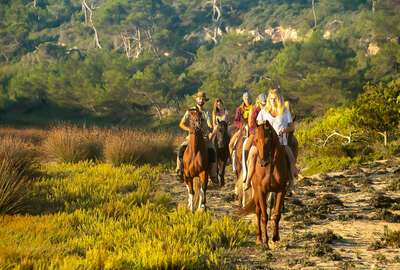 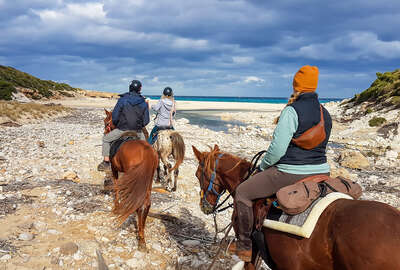 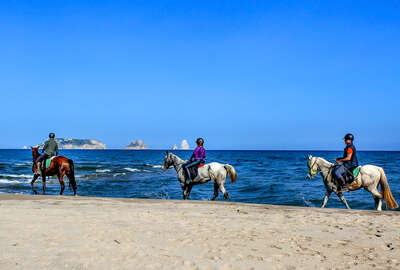 A taste of the Costa Brava 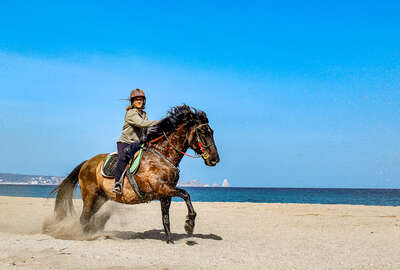 Mountains and beaches of Catalonia 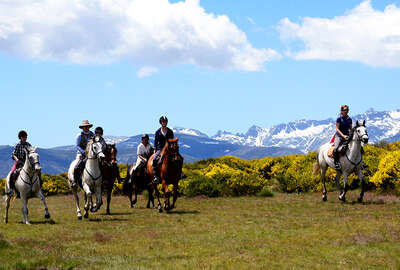 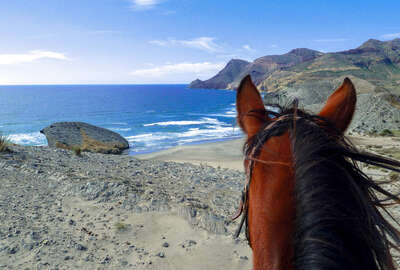 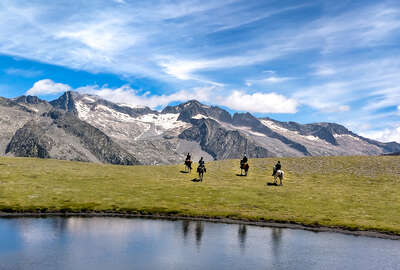 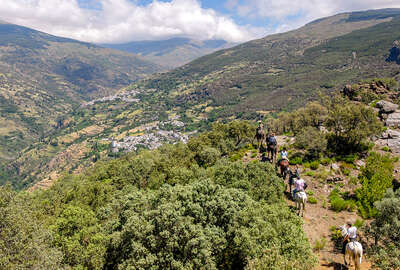 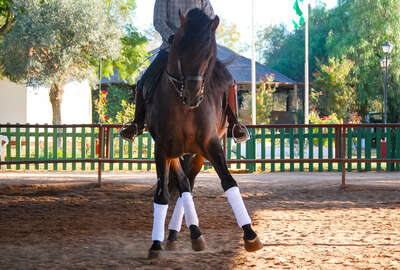 Visas - The rules for travelling or working in European countries changed on 1 January 2021:
- you can travel to countries in the Schengen area for up to 90 days in any 180-day period without a visa. This applies if you travel as a tourist, to visit family or friends, to attend business meetings, cultural or sports events, or for short-term studies or training
- if you are travelling to Spain and other Schengen countries without a visa, make sure your whole visit is within the 90-day limit. Visits to Schengen countries within the previous 180 days before you travel count towards your 90 days

At Spanish border control, it is likely you will need to use separate lanes from EU, EEA and Swiss citizens when queueing. Your passport may be stamped on entry and exit unless you can demonstrate that you are resident of Spain and are returning to your place of residence.

Please visit for the FCO website for up-to-date information - https://www.gov.uk/foreign-travel-advice/spain/entry-requirements

There are no vaccinations legally required to travel to Spain.

The health system in Spain is good. It's not exceptional, but certainly not bad. People who work in Spain are insured through a social security plan, which covers most of their needs. The only thing that is not included are dental treatments. There is also the possibility for a private insurance.
Pharmacies can be found in every town, and in bigger cities almost every street has one. Even at night it should not take you a long time to find a pharmacy that is open. Remember that more drugs are prescribed in Spain than any other country.

Spain has adopted the Euro (EUR, symbol: €) as its official currency. One Euro is divided into 100 (euro)cents, which are sometimes referred to as eurocents, especially when distinguishing them from the US cents.
Euro banknotes come in denominations of €5, €10, €20, €50, €100, €200 and €500. The highest three denominations are rarely used in everyday transactions. All Euro banknotes have a common design for each denomination on both sides throughout the Eurozone. The Euro coins are 1 cent, 2 cents, 5 cents, 10 cents, 20 cents, 50 cents, €1 and €2. Some countries in the Eurozone have laws which require cash transactions to be rounded to the nearest 5 cents. All Euro coins have a common design on the denomination (value) side, while the opposite side may have a different image from one country to another. Although the image side may be different, all Euro coins remain legal tender throughout the Eurozone.

The international access code for Spain is +34. The emergency number for police, ambulance and the fire brigade is 112.

Language: The official language is Spanish (Castilian). Other languages spoken in the first language in Spain include Euskera (in Basque Country, northeastern Spain), Catalan (in Eastern Spain, with variations spoken in Valencia and the Balearics) and Galician (in the northwest). There are also various regional dialects, but you’ll have no problems getting around Spain with knowledge of Castilian Spanish.
Religion: There is no official religion in Spain. Approximately 73% of the population is Roman Catholic, while 22% has no religion. The young generation are less religious than before, but most still celebrate religious festivals. There are approximately 1 million Muslims (2.3% of the country) living in Spain.
Political regime: Parliamentary monarchy
Head of State: King Felipe VI of Spain since 2014
Head of government: Prime Minister Mariano Rajoy since 2011

The economy in Spain has suffered tremendously under the global economic downturn of the early 21st century. Unemployment rate has reached a new Eurozone high at 21.3% in early 2011, with a record of 4.9 million people unemployed. Along with other major European economies, Spain is currently experiencing a negative GDP growth and inflation. The inflation rate in Spain fluctuated from 3 to 3.8% in 2011.
The agricultural sector produces cereals, vegetables, fruit, olive oil, meat and wine. The fishing fleet, although reduced, remains one of the world's largest. In the Canary Islands, bananas are the main crop produced by the agricultural industry, with just over 90% of produce going to the mainland. In fact, the Canary Islands are the largest banana producer in the EU. The next most important crop is tomatoes, followed by potatoes, flowers and ornamental plants and vines.

Spain is a strategically located nation, a fact which has led to it being conquered by many empires throughout history. The Celts, Phoenicians, Carthaginians and Greeks all had a hand in the region in ancient times, but the Roman Empire was the first major empire to extend into the Iberian peninsula. Rome was part of Spain from the 2nd century BC through to its demise in the 5th century, when the Visigoths displaced them. Two centuries after that, the Moors stormed across from North Africa into Spain, extending their Islamic Empire.
The reconquest of Spain was a priority for the Christian kingdoms of Europe, who were gradually able to fight their way back into and across parts of Iberia. In the 15th century, Fernando of Aragón and Isabel of Castile married, leading to a unified Spain. It was around this time that Christopher Columbus sailed out to discover the New World, setting off a process of Spanish conquest in the American continent. Colonization created wealth for Spain. Wealth which was, in turn, used to fight wars in Europe and continue the very bloody inquisition in Spain and beyond its borders.
Spain mined so much gold and silver in the New World that it actually devalued the world price gold. Since its entire economy was valued on gold and silver, this hit its economy extremely hard. Whenever Spain entered into war with another European power, the gold and silver ships were also their main weakness, as their opponents would simply attack the slower and weaker gold and silver ships, sinking countless numbers of them. Throughout the 17th, 18th and 19th century Spain's power declined even more rapidly, to the point where almost all of its New World colonial possessions were independent by 1811 and most of Spain was under the rule of Napoleon during a couple of years in the early 19th century. The humiliation continued in 1898, when Spain lost Puerto Rico, Cuba, Guam, Micronesia, Palau and the Philippines to the United States in the Spanish-American War.
The 20th century was an unstable period in Spain's history. Anarchy and fascism were both gaining prominence in the Spanish political landscape at the turn of the century. In 1931, the Second Spanish Republic was established - only to be destroyed during the Spanish Civil War, which ran from 1936-39. Francisco Franco took control of the country. He would rule Spain with an iron fist for close to four decades.
After Franco's death in 1975, it didn't take long for Spain to move towards democracy. Since 1978, Spain has been a democratic state, a process helped greatly by the attitude of the present King, Juan Carlos. Echoes of Franco's dictatorship rang through during the failed coup of 1981, a coup of which the physical bullet holes can still be seen in the ceiling of the congress building in Madrid. In 1986 Spain became a member of the European Union, and introduced the Euro (€) in 2002, replacing the peseta.

Spain shares the Iberian Peninsula with its smaller neighbour, Portugal, and is bordered to the northeast by the Pyrenees mountain range that cuts across France and Andorra. Surrounded by the Atlantic Ocean and the Mediterranean Sea, Spain has numerous stretches of coastline that are extremely crowded especially in summer.
Spain has two main groups of islands that are popular with tourists: the Balearic Islands located 193km (120 miles) southeast of Barcelona, and the Canary Islands off the west coast of Africa.
Mainland Spain is the second highest and most mountainous country in Europe, with an average height of 610m (2,000ft). The Pyrenees stretch roughly 400km (249 miles) from the Basque Country's Atlantic coast. In places the peaks rise to over 1,524m (5,000ft), the highest point being 3,404m (11,169ft).
The main physical feature of Spain is the vast central plateau, or meseta, divided by several chains of sierras. The higher northern area includes Castile and León and the southern section comprises Castile-La Mancha and Extremadura. In the south, the high plains rise further at the Sierra Morena before falling abruptly at the great valley of the Guadalquivir.
Southeast of Granada is the Sierra Nevada, which runs parallel to the Mediterranean. Its summit Mulhacen, at 3,718m (12,198ft), is the highest point on the Spanish peninsula. The highest peak in Spain is the Pico del Teide on Tenerife in the Canaries, measuring a height of 3,718m (12,198ft).

Social conventions:
Spanish life has undergone rapid change in recent decades and stricter religious customs have been superseded by more modern ways, particularly in the cities and among women. In spite of this, traditions remain strong; hospitality, chivalry and courtesy thrive. Handshaking is the customary form of greeting between men, while women (outside of a business context) are greeted with a fleeting kiss to either cheek (left then right).
Spaniards eat late; lunch around 1400-1530; the evening meal 2100-2300. The Spanish have two family names; the maternal surname follows the paternal, but is rarely used outside a formal context. Smoking is banned in offices, shops, schools, hospitals, cultural centres and on public transport. Bars and restaurants must declare whether they permit or prohibit smoking. The vast majority have opted for the former, though large restaurants are obliged by law to have a substantial non-smoking section.