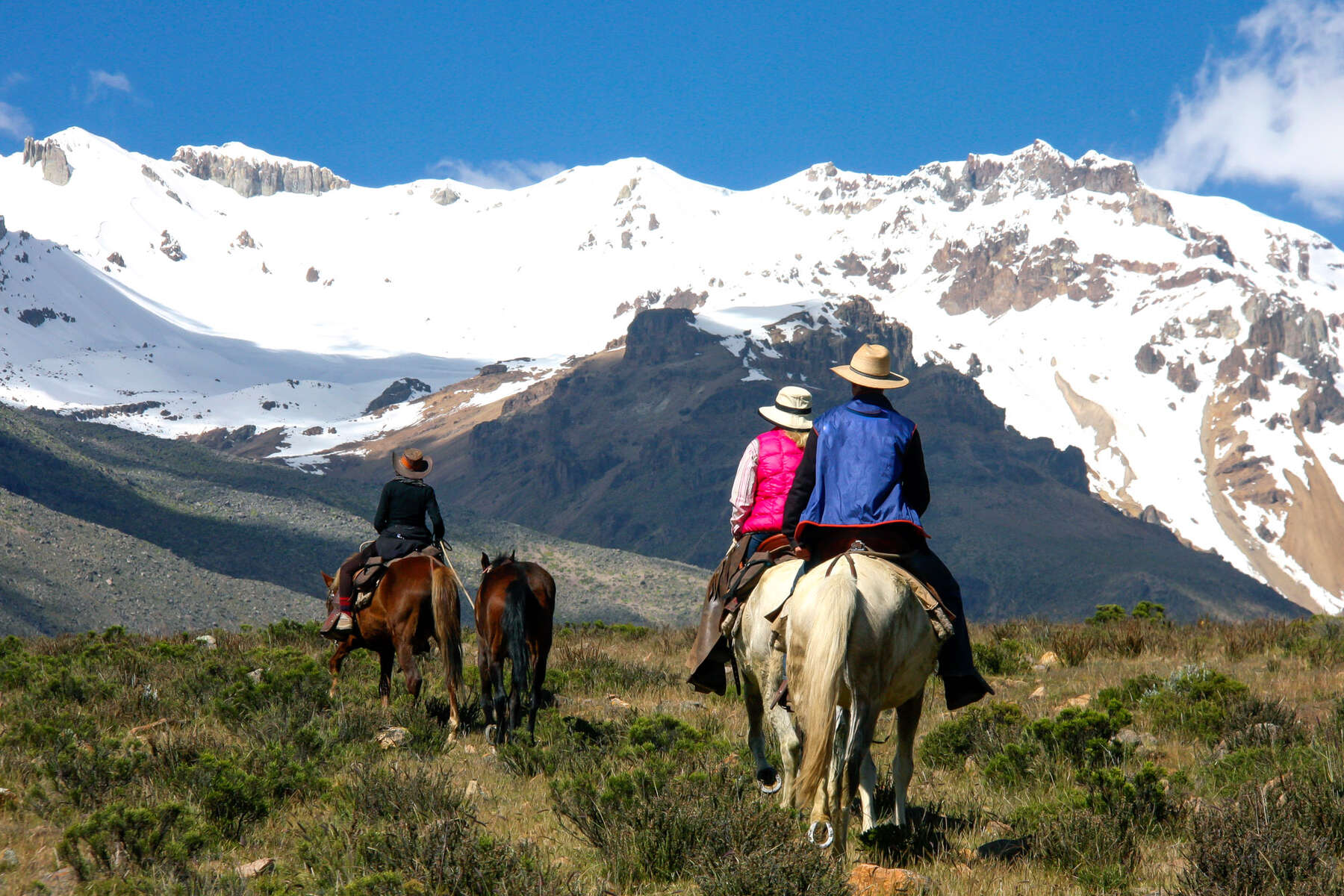 Peru encompasses the splendour of the high Andes and ancient Incan civilisations. Horse-riding trails in Peru offer the opportunity to ride the Peruvian Paso - the cadillac of horses with its smooth extra gait, the paso llano. Visit Macchu Picchu, Cusco and other Incan sites whilst riding through dramatic mountain scenery or follow riding trails through the Colca Canyon and end your holiday at Lake Titicaca. Riding trails in Peru can offer great luxury, staying in comfortable hotels or you can choose a more rustic approach with nights spent camping out under the stars.
See all our trips 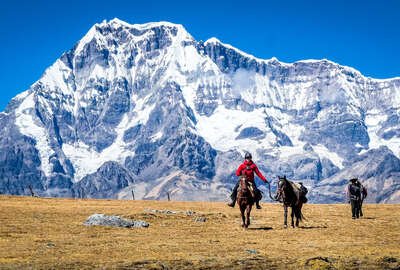 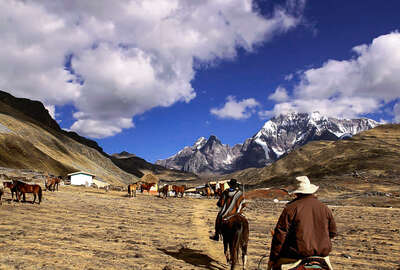 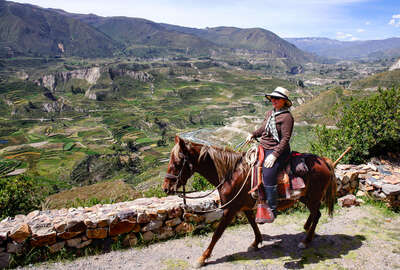 To enter Peru, a passport is required by all Australian, USA, Canadian, British and other EU nationals. Your passport should be valid for a minimum period of 6 months from the date of entry into Peru.

While it is not required by the immigration authorities, some airlines require passengers to show proof of onward travel (e.g. an airline ticket) in order to travel to Peru.

There are no vaccinations legally required to travel to Peru. It's a good thing to get your vaccinations in order before travelling to Peru. The general vaccination against Diphtheria, Tetanus and Polio (DTP) is recommended. Also a Hepatitis A and yellow fever (only for the eastern parts in the Amazon) vaccination is recommended and vaccination against hepatitis B, tuberculosis, rabies and typhoid are also sometimes recommended for stays longer than 3 months.
Malaria is prevalent in the country, but only below 2,000 metres in the east of the country and along the border with Ecuador. It is recommended to take malaria pills and take other normal anti-mosquito precautions as well. Dengue sometimes occurs as well. There is no vaccination, so buy mosquito repellent (preferably with 50% DEET), and sleep under a net. Also wear long sleeves if possible.
If you have any medical problems you can visit a pharmacy (farmacia) in most towns and cities who will be able to give you tablets for many problems, eg cipro for a badly upset stomach, or antibiotics for chest infections. Medicine is cheap and the pharmacist will give advice for free. If you need stitching up or want to seek proper medical attention even the smallest of villages will usually have a clinic where you can be seen by a doctor for next to nothing.

The local currency is the Nuevo Sol, often written as 'S/'. US dollars are widely accepted and prices for hotels and flights are often quoted in USD. You will not have trouble changing Pounds Sterling or Euros in the cities. All of the tourist cities and towns have cambios where you can change money, and often you will find people changing money on the street sometimes they offer a better deal, sometimes they will rip you off so take care if using the street changers. Try to get your money in the smallest denominations you can (no higher than S/50) or you will find it very difficult to spend the larger notes outside of large hotels or expensive restaurants and you may find yourself standing by a stall for five minutes whilst the owner runs around looking for change.

Language: Spanish and Quechua are the official languages. Aymara is spoken in the Lake Titicaca area. Many other dialects exist in the jungle regions.
Religion: 81.3% Roman Catholic, 12.5% Evangelical, 3.3% other denominations, 2.9% unspecified or none
Political regime: Republic
President: Ollanta Humala since 2011
Prime Minister: Pedro Cateriano

The Peruvian economy is divided into two distinct parts: a relatively modern industrial and service economy concentrated on the coastal plain, and a subsistence agricultural economy in the interior. Inevitably, one consequence has been huge migration from the interior to the coastal cities. Most foreign investment is directed towards Peru's major industry, mining, which accounts for about half of export earnings. Meanwhile, tourism has snowballed and now brings in more than US$1 billion annually.
During the early to mid 1990s, Peru implemented important market-oriented reforms, including privatisation of key industries, trade deregulation and measures to attract foreign investment. The strategy was reasonably successful, and the country's economy is relatively stable. The unemployment rate was 7.6% in Lima in 2009, but it is estimated that up to 40% of the general workforce are underemployed. Peru's annual growth was estimated to be 9% in 2010. The inflation rate was 2% in 2009. The passing of Free Trade Agreements with the USA in 2009 and China in 2010 is expected to spur considerable growth in the next decade.

Some of the oldest civilizations appeared circa 6000 BC in the coastal provinces of Chilca and Paracas, and in the highland province of Callejón de Huaylas. Over the following three thousand years, inhabitants switched from nomadic lifestyles to cultivating land, as evidence from sites such as Jiskairumoko, Kotosh, and Huaca Prieta demonstrates. The first more familiar cultures are the Norte Chico civilization, from c. 3000 BC, and the Chavin culture, which emerged c. 900 BC. The Paracas culture emerged on the southern coast around 300 BC. Coastal cultures such as the Moche and Nazca flourished from about 100 BC to about 700 AD.
The Incas created the vastest dynasty of pre-Columbian America. The empire reached its greatest extension at the beginning of the sixteenth century. It dominated a territory that included from north to south Ecuador, part of Colombia, the northern half of Chile, and the north-west part of Argentina; and from west to east, from Bolivia to the Amazonian forests and Peru. The empire originated from a tribe based in Cuzco, which became the capital.
Francisco Pizarro and his brothers were attracted by the news of a rich and fabulous kingdom. In 1532, they arrived in the country which they called Peru. At that moment, the Inca Empire was preoccupied by a five-year civil war between two princes, Huáscar and Atahualpa. Taking advantage of this, Pizarro captured the Inca Atahualpa during the Battle of Cajamarca. When Huascar was killed, the Spanish tried and convicted Atahualpa of the murder, executing him by strangulation.
A census taken by the last Quipucamayoc indicated that there were 12 million inhabitants of Inca Peru; 45 years later, under viceroy Toledo, the census figures amounted to only 1,1 million Indians.
Jose de San Martin of Argentina proclaimed the independence of Peru in Lima on July 28, 1821 as a result of many uprisings towards independence. But it was only in 1879 when Spain finally recognized Peru’s sovereignty. Soon after, Peru engaged in many intermittent territorial disputes conflicts with its neighbors such as Bolivia, Chile, and Ecuador. Political and economic stability were attained during the early 1900s, after the Pacific War was over and the government begun initiating numerous social reforms.
After a dozen years of military rule, Peru returned to democratic leadership in 1980, but experienced economic problems and the growth of a violent insurgency. President Alberto Fujimori's election in 1990 ushered in a decade that saw a dramatic turnaround in the economy and significant progress in curtailing guerrilla activity.
The presidential election of 2006 saw the return of Alan Garcia who, after a disappointing presidential term from 1985 to 1990, returned to the presidency with promises to improve social conditions and maintain fiscal responsibility

Peru is a large, mountainous country on the Pacific coast of South America that borders Ecuador and Colombia to the north, Brazil and Bolivia to the east, and Chile to the south. The Pacific Ocean lies to the west. There are three natural zones:
The Costa region, which contains Lima (the capital), is a narrow coastal plain consisting of large tracts of desert broken by fertile valleys. The cotton, sugar and rice plantations and most of the so-far exploited oil fields lie in this area, as does the majority of the population. The best roads run along the coast, having straight, flat paths ahead of them, and travel times are usually good.
The highland Sierra contains the Andes, with peaks over 6,000m (20,000ft), most of the country's mineral resources (silver, zinc, lead, copper and gold) and the greater part of its livestock. Roads in this area wind up, down and around mountains, so travelling in this area is often time-consuming.
The Selva (jungle), an area of fertile, subtropical land, lies between the Andes and the borders with Brazil, Bolivia, Colombia and Ecuador. The Amazonian jungle has vast natural resources. The absence of land communications, however, left the area largely uncharted until full-scale oil exploration began in 1973. Even today roads barely penetrate the region. Some areas are best reached by small plane.

Shaking hands is the customary form of greeting. Kissing on one cheek between women and between women and men is common in coastal cities. Travellers should avoid the scruffy ‘backpacker’ look – it is not admired and considered bad etiquette.
Peruvians (and Latin Americans in general) are not really confrontational people – if you are struggling with some aspect of your travel (uncomfortable rooms, late buses etc), losing your temper will not get you very far. Instead, stay patient, keep smiling and someone will help you eventually, if only to make you go away.

One of the highlights of a horse riding holiday in Peru is the Peruvian Paso horse. Native to Peru, these horses are direct descendents of the Spanish horses brought over by Christopher Colombus and the Conquistadors. Due to their isolation within the Andean mountains they are considered to be one of the purest breeds in the world.

The trademark of the Peruvian Paso is its special gait - the Paso Llano. A four beat, lateral gait similar to the Icelandic gait, the Paso Llano has a distinctive action where the forelegs are rolled outwards as the horse moves forwards. Called Termino this action is natural and originates from the shoulder, allowing the horse to swing the leg forwards out of the way of the hind legs.This harmonic motion makes the paso llano a very smooth gait and the Peruvian Paso has been described as the cadillac of horses.

Peruvian breeders believe that great horses are born and not trained - training simply brings out the animals inherent ability. In order to ensure that horses show only their true and natural gaits, without modification, no horse is allowed in a Peruvian show ring wearing shoes or with hooves longer than 4 inches.

Peruvian Paso's are 14hh - 15.3hh high and are high-spirited but easy to handle. They have a sparkling action whilst remaining smooth and sure footed. They have a refined but powerful build and can be found in all whole colours such as bay, chestnut and grey.