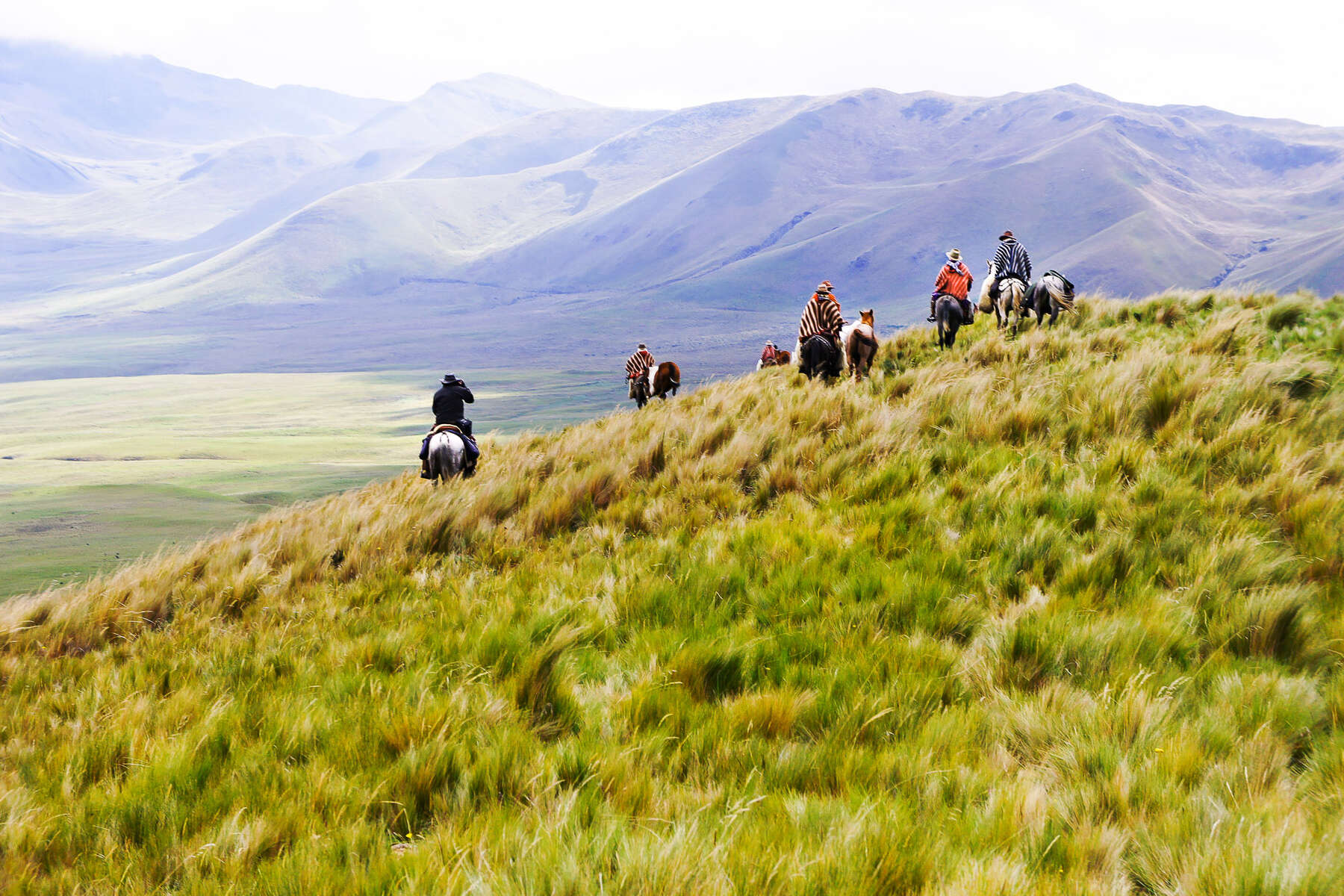 High in the Andes mountains, Ecuador offers horse-riding trails amongst the spectacular scenery of the Avenue of volcanoes. Immerse yourself in the culture of the Ecuadorian highlands and round-up cattle with local chagras (cowboys) whilst staying in traditional haciendas. Canter across open plains with no fencing to impede you, whilst watching condors circling overhead. You can even extend your riding holiday to visit the Amazon or Galapagos Islands.
See all our trips 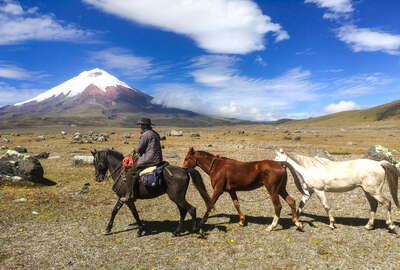 The volcano trail: from Cotopaxi to Quilotoa 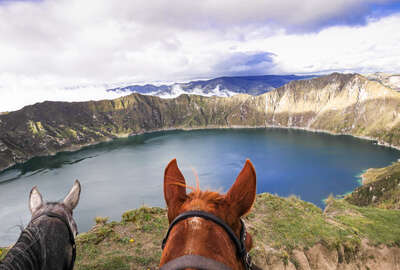 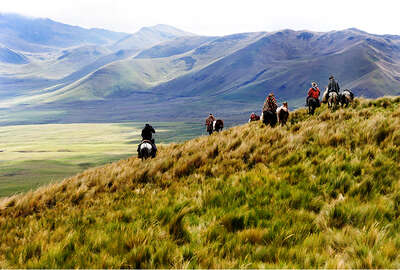 All tourists need a passport valid for at least six months beyond their travel dates. In principal you also need an onward ticket or return ticket as well, although this is rarely asked for. Upon entry you will have to complete an international embarkation/disembarkation form, which is stamped along with your passport and must be kept together with it; you will have to present it when leaving the country.

Passport note:
You are legally required to carry your passport with you at all times in case of a spot check by local authorities; a photocopy is not an officially acceptable substitute and you may find that you are not allowed to return to your hotel to collect the original.

Visas:
Visas are not required by American, Canadian, Australian, British or other EU nationals for stays of up to 90 days in a 12-month period.
Visa note:
Nationals not referred to are advised to contact the embassy to check visa requirements for Ecuador.

Insurance:
From 22nd July 2018 onwards, tourists arriving for a stay of 90 days or less will be asked to show proof that they have appropriate travel medical insurance. This also applies to the Galapagos Islands.

It's a good thing to get your vaccinations in order before travelling to Ecuador. The general vaccination against Diphtheria, Tetanus and Polio (DTP) is recommended. Also a hepatitis A vaccination is recommended and vaccination against hepatitis B, tuberculosis, rabies and typhoid are also sometimes recommended for stays longer than 3 months.
Malaria is prevalent in some parts of the country (below 2,000 metres, especially in the rainforest but also some coastal areas, none on the Galapagos Islands) and it is recommended to take malaria pills and take other normal anti-mosquito precautions as well. Dengue sometimes occurs as well. There is no vaccination, so buy mosquito repellent (preferably with 50% DEET), and sleep under a net. Also wear long sleeves if possible.

UK health authorities have classified Ecuador as having a risk of Zika virus transmission.

Finally, other possible health issues include diarrhea and other general travellers' diseases like motion sickness. Watch what you eat and drink and in case you get it, drink plenty of fluids (to prevent dehydration) and bring ORS.


Ecuador’s standard time is -5 Hours away from Greenwich Mean Time and Ecuador does not utilise Daylight Time Saving.

Following economic crisis and poverty, the adoption of the US Dollar (in 2000) stablised the nation's economy. However, 33% of the population are still below the poverty line (2010). Growth has been slow but steady, at 3.6% in 2010 and 6.5% in 2011, with unemployment for 2011 at 4.2% and inflation at 5.4%.
Ecuador has substantial petroleum resources, which has earned more than a half of the country's export revenue in recent years. It is the world's largest exporter of bananas and also grows coffee, cocoa, palm oil and sugar in significant quantities.
Fishing is another important sector: seafood exports have expanded rapidly to the point where Ecuador is now the world's second-largest producer of shrimps. The mining sector produces gold, silver, copper and other metals.
Ecuador is a member of the World Trade Organisation. In recent years, the country's increasing oil revenues have largely been devoted to paying off the country's substantial foreign debt. Ecuador is a member of the main regional integration bodies: the Andean Union and Asociación Latinoamericana de Integración (ALADI).
GDP:
US$65.9 billion (2011 estimate).
Main exports:
Petroleum, bananas, coffee, cacao, cut flowers and shrimp.
Main imports:
Industrial materials, nondurable consumer goods, fuels and lubricants.

Evidence of human cultures in Ecuador exist from around 3500 B.C. Many civilizations rose throughout Ecuador, such as the Valdivia Culture and Machalilla Culture on the coast, the Quitus (near present day Quito) and the Cañari (near present day Cuenca).
Through a succession of wars and marriages among the nations that inhabited the valley, the region became part of the Inca Empire in 1463. When the Spanish conquistadors arrived from the north, the Inca Empire was ruled by Huayna Capac. In 1531, the Spanish conquistadors, under Francisco Pizarro, arrived to find an Inca empire torn by civil war by Huayna Capac's sons, one of which ruled the north (based in Quito) while the other ruled the south (Cuzco). Atahualpa (Quito) defeated Huascar (Cuzco) though, and conquered the entire empire for its own. Atahualpa wanted to re-establish a unified Incan empire; the Spanish, however, had conquest intentions and established themselves in a fort in Cajamarca, captured Atahualpa during the Battle of Cajamarca (1532), and held him for ransom. Despite being surrounded and vastly outnumbered, the Spanish executed Atahualpa.
Disease decimated the indigenous population during the first decades of Spanish rule. In 1563, Quito became the seat of a royal audiencia (administrative district) of Spain and part of the Vice-Royalty of Lima, and later the Vice-Royalty of Nueva Granada
It was in Quito, on August 10, 1809 (the national holiday), that the first call for independence from Spain was made in Latin America. On October 9, 1820, Guayaquil became the first city in Ecuador to gain its independence from Spain. On May 24, 1822, the rest of Ecuador gained its independence after Antonio José de Sucre defeated the Spanish Royalist forces at the Battle of Pichincha, near Quito.
Control over territory in the Amazon basin led to a long-lasting dispute between Ecuador and Peru. In 1941, amid fast-growing tensions between the two countries, war broke out. Peru claimed that Ecuador's military presence in Peruvian-claimed territory was an invasion; Ecuador, for its part, claimed that Peru had invaded Ecuador. In July 1941, troops were mobilized in both countries. This was the start of decades of tensions and war between the two countries. Ecuador and Peru reached a tentative peace agreement in October 1998, which ended hostilities, and the Guarantors of the Rio Protocol ruled that the border of the undelimited zone was indeed the line of the Cordillera del Cóndor, as Peru had been claiming since the 1940s. Still, Ecuador got a small piece of land from Peru in turn as well. The final border demarcation came into effect on May 13, 1999.
The 1970s saw a time of military governments but elections were held on April 29, 1979, under a new constitution. Jaime Roldós Aguilera was elected president, garnering over one million votes, the most in Ecuadorian history. He took office on August 10 as the first constitutionally elected president after nearly a decade of civilian and military dictatorships.
The emergence of the indigenous population (approximately 25%) as an active constituency has added to the democratic volatility of the country in recent years. The population has been motivated by government failures to deliver on promises of land reform, lower unemployment and provision of social services, and historical exploitation by the land-holding elite.

Ecuador comprises a number of very distinct, dramatic geographical regions. The Andes run north-south through the country and form a mountainous spine with a number of peaks over 5,000m (16,404 ft) and some climbing to 6,500m (21,325ft). There are two main ranges, the central Cordillera and the Western Cordillera, which are separated by the Central Valley. At 400km (249 miles) long, the valley is just 50km (31 miles) wide. Its two rims are connected by a series of high plateaux that are separated by a series of gentle ridges. Rivers from the peaks run east to the Amazon and west to the Pacific Ocean.
The rims of the valley are crowned with the cones of more than 50 volcanoes, many of which are active. The highest is Chimborazo at 6,310m (19,685ft), although this behemoth is now extinct. Cotopaxi is the highest active volcano in the world at 5,897m (19,347ft) but hasn’t had a major eruption since the 19th century. Pichincha on the other hand issued an enormous mushroom cloud in 1999, Reventador has erupted several times sine 2002 and Sangay continuously fumes and emits ash. Earthquakes are also common in this region.
The Sierra, or central highlands, is a central trough. Home to almost half the population, it is also where the oldest and most important cities are situated. The Costa, or coastal plain, in contrast is a lowland area with a belt of hillier ground north of Guayaquil. In the extreme north there is tropical rainforest, whilst in the south the forest thins out and becomes tropical dry forest.
East of the Central Cordillera the forest-covered slopes descend into the jungle of the Oriente. This vast region comprises about a third of Ecuador’s total surface area but is very sparsely populated and in fact home to just 5% of the population, most of whom are indigenous Indians or adventurous agriculturalists.
The Galapagos Islands lie 1,000km (621 miles) to the west of Ecuador, on the equator. These atolls are in fact the tips of massive volcanoes jutting above the sea and mark the point where two tectonic plates meet. Several of the islands are still active today; Fernandina, which last erupted in 2009, is the most active here. This extreme isolation is what has allowed the evolution of the unique flora and fauna found here.