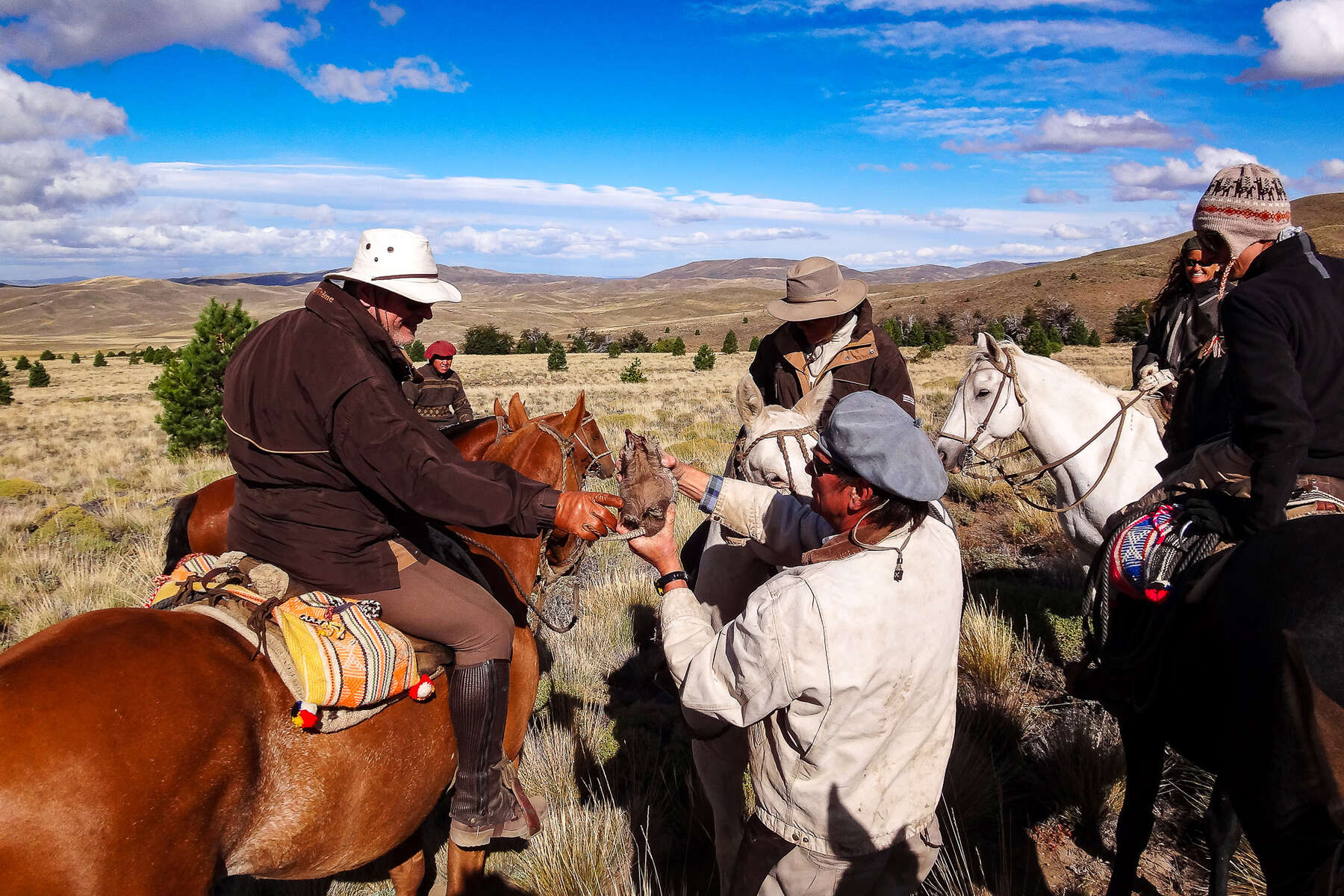 Chile is a land of contrasts - from the dry Atacama desert in the north, to the Lake District in northern Patagonia and down to the glacial fields of southern Patagonia at its tip - there's a horseback trail to suit everyone. The landscapes are vast and stunning, with impressive mountain ranges, volcanoes, deserts, fjords and crystal clear glacial rivers. Horse riding trails in Chile are breathtaking in every sense of the word.
See all our trips 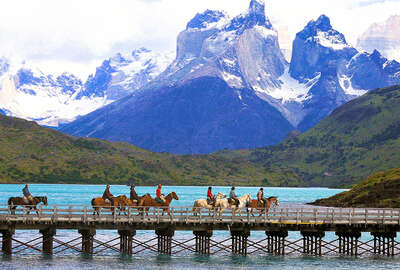 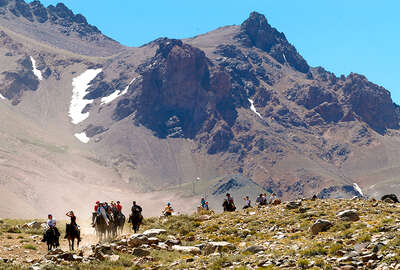 Crossing the Andes at Aconcagua 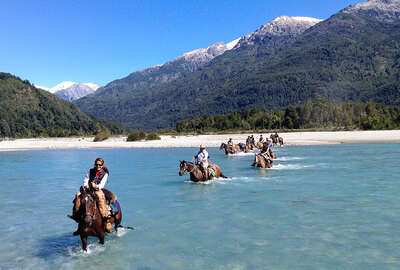 To enter Chile, a passport valid for the duration of stay is required by all American, Canadian, British and EU nationals. Nationals not referred to are advised to contact the embassy to check visa requirements
Passports issued to children must contain a photo and state the nationality.
On arrival in Chile the immigration authorities will issue you with a ‘Tarjeta de Turismo - Tourist Card’, an A5 sized white form. You must retain this document and present it to immigration when you leave.
Visas:
Visas are not required by the nationals referred to above for stays in Chile of up to 90 days. Nationals of Greece may only stay for up to 60 days without a visa. Nationals from Australia (US$95) and Canada (US$132) must pay a reciprocal tax at the airport.
As of 2014, US nationals no longer need to pay a reciprocal tax.

Visa and MasterCard are commonly accepted; American Express slightly less so - in towns and cities, where ATMs are also largely available. Outside of the larger, more tourist-centred towns, currency exchange can be tricky.

The country calling code to Chile is: 56. To make an international call from Chile, the code is: 00.
Standard time – 4.00 GMT

Language: Spanish is the official language of Chile, with indigenous languages relegated to minority status after colonisation. Chileans have a distinctive accent that sets them apart from other Spanish-speaking South American countries. They tend to drop the final syllables of words, as well as 's' sounds.
Religion: 70% Catholic, 15.1% evangelists
Political regime: Republic
President: Michelle Bachelet since 2014

With well-developed industrial and service sectors, Chile has one of Latin America's strongest economies. However, it still depends on export of primary commodities (metals and ores, fruit, fish and wood) for a large proportion of its export earnings. With commodity prices dropping recently, harsher times look likely for the Chilean economy, in line with the straitened financial times across the world.

However, Chile's industrial base has grown substantially over the last decade and includes steel manufacturing, oil production, ship building, and the production of cement and consumer goods. The mainstay of the export economy is still metals and ores: Chile is the world's leading exporter of copper and also produces zinc, iron ore, molybdenum, manganese, iodine and lithium.

The service sector has developed rapidly, especially financial services. Chile's economic performance has been strong since 2000; unemployment was estimated at roughly 6% in early 2014.

The territory of Chile has been populated since at least 12,000 BC when migrating Native Americans settled in the fertile valleys and coastal areas of what is present day Chile. Pre-Hispanic Chile was home to over a dozen different Amerindian societies. Specific early human settlement sites from the very early human habitation in Chile include the Cueva del Milodon and the Pali Aike Crater's lava tube.
Although today Chile is a democracy and a stable South American economy, partly thanks to its strong trade ties with the US, its history hasn’t always been that simple. A conquered nation, like its neighbours, Chile went through colonisation in the north at the hands of the Spaniard Pedro de Valdivia, who then founded the capital Santiago in 1541.
In the south, it took European conquerors more than 300 years to colonise the resisting Mapuche Indians. With civil unrest developing due to Spain’s firm trade control and domination of farm estates, Chile was finally liberated in 1818 thanks to the Argentinean José de San Martín and Bernarndo O’Higgins, who was a dictator for five years and established Catholicism as the nation’s religion.
The regime seed had been sown, right from Chile’s birth. Generals have led military coups over the years, but the most prominent was General Pinochet’s, which lasted 17 years until 1990. Overthrowing Marxist President Salvador Allende, thousands of Allende’s supporters were killed and tortured while others were forced into exile due to Pinochet’s extreme right-wing policies.
However, Pinochet brought financial stability with a free market economy and in 1989 he stepped down as leader. Patricio Aylwin won with 55% of the votes and so began the slow path to democracy. Since then, ruling parties have tended to be socialist and Chile voted in its first female president, Socialist Michelle Bachelet, in 2006. Her successor, Sebastián Piñera, was from the right-wing Coalition for Change party; in 2014, Bachelet took her place once again in office as the country’s president with over 62% of the vote.
Chile has taken some hard knocks. An earthquake measuring 8.8 on the Richter scale hit in 2010 caused mass devastation and the trapping and subsequent rescue of 33 miners from a San José copper mine for more than two months was a global news story. Chile continues to manage its economy well, and staved off recession in 2009, becoming an OECD member that same year. It was voted 31st best country in the world in which to live by US Newsweek in August 2010 and it currently holds its spot as South America’s most stable and prosperous nation. After a turbulent past, the future looks bright for beautiful Chile.

Chile is situated in South America, bordered to the north by Peru, to the east by Bolivia and Argentina, to the west by the Pacific Ocean and to the south by the Antarctic. The country exercises sovereignty over a number of islands off the coast, including the Juan Fernández Islands and Easter Island. Chile is 4,329km (2,690 miles) long and nowhere more than 180km (112 miles) wide.

The Andes and a more westerly coastal highland range run parallel with each other for much of the country's length. The coastal range forms high, sloped cliffs into the sea from the northern to the central area. Between the ranges runs a fertile valley, except in the north where transverse ranges join the two major ones, and in the far south where the sea has broken through the coastal range to form an assortment of archipelagos and channels.

Wide variations in soil and a vast difference in climate are reflected in an uneven population distribution, and in a wide range of occupations. The Atacama desert, the driest in the world, is in the northern part of the country, which is also the main mining area. The central zone is predominantly agricultural, and is often referred to as the breadbasket of Chile. This is where two-thirds of the population reside. Below Concepción, there are large tracts of forested land, although the area also has some agriculture. Chile is prone to frequent powerful earthquakes as the Liquine-Ofqui Fault lies just under the northern Patagonian Andes and runs for 1000km (621 miles).

Chileans are often seen as more formal than others in South America. Handshaking is the customary form of greeting between men. On informal, social occasions, women usually greet friends with a single kiss on the cheek..
Most Chileans consider themselves Catholic, and undertake baptism and first communion although they may not practise as adults. People believe in marriage and even if they are not practising Catholics, a wedding will still take place in a church. Co-habitation does exist between younger couples although it is not very common; however it is accepted. The divorce rate is higher than the marriage rate, although that is probably because Chile was one of the last countries in the world to make divorce legal in 2004. Chileans also adhere to Catholic death rites.

On all our riding holidays in Chile you will see and probably ride, the Chilean Criollo horse.

Unlike other Criollo breeds, the Chilean Criollo originates entirely from South America and has not been influenced by the import of European breeds. Most of the horses came from fertile valleys in Peru and Bolivia - the difficult passage across the Andes mountains and the dry deserts in the north of Chile meant that only the toughest and soundest horses made it to the central valleys of Chile. Here they were bred as cattle horses and only the best mares were bred from - they had to show lateral dexterity, courage to confront and pin untamed cattle and an even temperament that permitted a high degree of trainability while conserving energy needed for a full days work.

Prior to 1850 the Chilean Criollo was a closed breed, and the geographical problems posed by its borders meant that they were one of the last countries to see new breeds arrive. Around this time, Chile became the first country to register their national breed and faithful traditional breeders ensured the purity of the breed.

Chilean Criollo's are extremely hardy. They have a low metabolism, strong hooves, and a thick double coat which makes them suitable for both cold and dry/hot weather. They have a very thick and abundant mane and tail and a great immunity to disease. Standing only 13.1 - 14.2 hands high they are tough enough to carry any reasonable sized adult rider up and down the most demanding gradients. Unlike other American breeds, such as mustangs and baguales, which evolved during natural selection, the Chilean Criollo has been bred under the influence of man, and selected for the specific purposes required of a companion animal in tough, mountainous terrain.

This is what makes the Chilean Criollo the ideal horse for our riding trails in Chile.