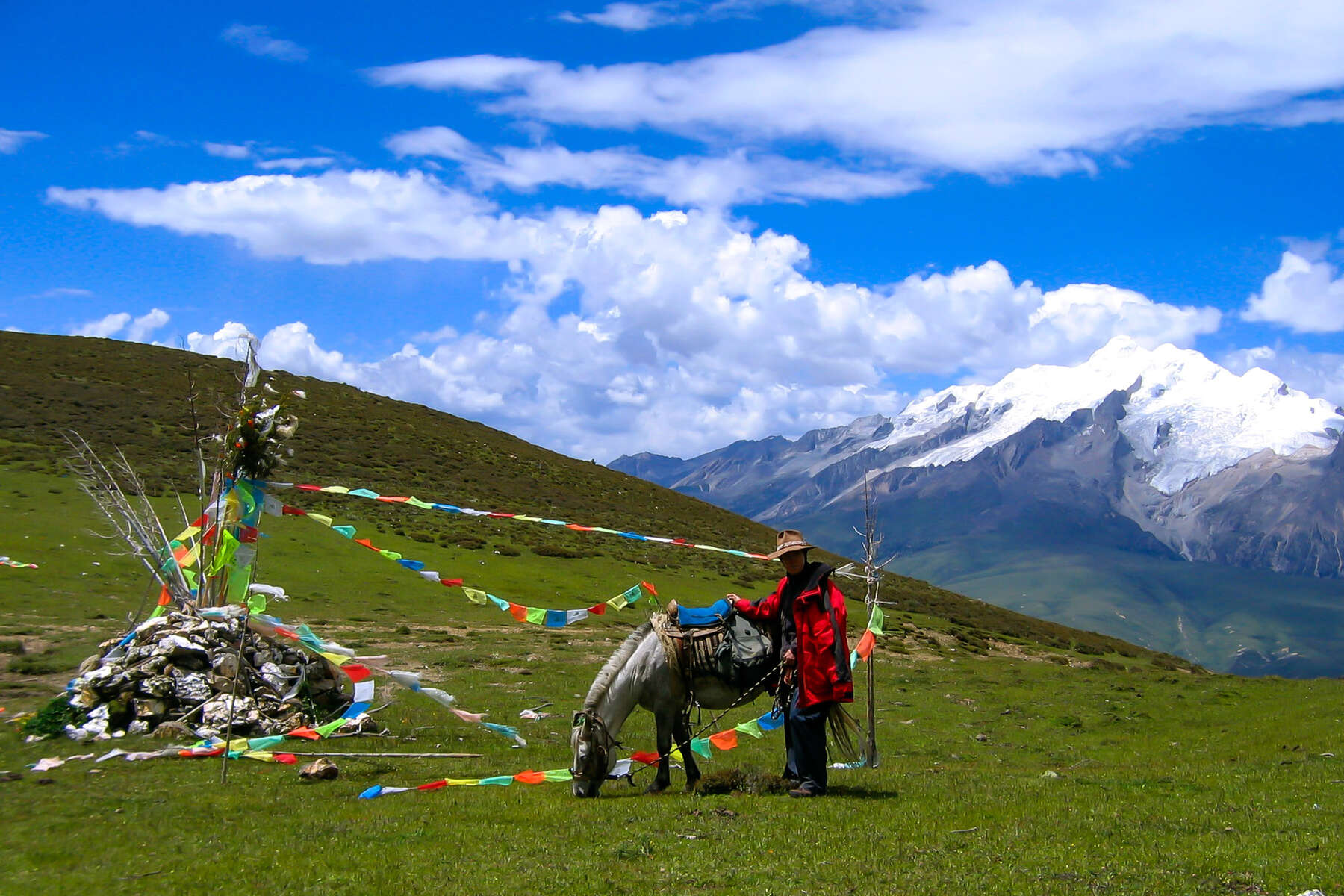 The historical regions of Kham and Ando are former Tibetan provinces and home to the descendants of warriors and horsemen. Tibet, deep within the Himalayas, remains a spiritual destination - an abundance of monasteries and fluttering prayer flags set against the grandeur of the high mountains. Travelling through the vast plateaus on horseback is the best way to meet the warm and welcoming nomads who call this harsh environment home.
See all our trips 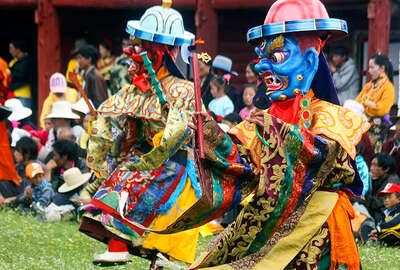 Visa applications for China should be made one month in advance.

The express service requires three days, and the regular service takes four days. Postal applications are usually processed and returned within 10 working days, if all the documentation is in good order

Make sure that you apply for a Chinese visa and do not mention Tibet on your visa application.

To enter Tibet, you must also obtain a Tibet travel permit. We require your passport details at least one month before your date of departure so that we can arrange this for you. Please note, the Tibet Tourism Bureau often puts a hold on issuing permits during times of political tensions and demonstrations and regulations are subject to change at short notice.

Many consulates (including those in the UK) issue visas through the Chinese Visa Application Service Centre
Visa for China - http://www.visaforchina.org
rather than directly through the consulate.

The high altitude and intense sunshine can cause serious problems for many travellers. It is recommended to wear high spf sun screen at all times with a full brim hat and sun glasses. Also remember because of the high altitude it is very easy to get dehydrated, so drink plenty of water.
Altitude sickness is a serious risk in Tibet. Symptoms range from breathlessness and headaches to lack of coordination and vomiting and can occur at any elevation over around 3000m (almost everywhere in Tibet). It is extremely important to allow several days to acclimatise. For travel outside Lhasa arrange your itinerary so that you don't gain more than 500m of altitude per day.
As with other parts of China hepatitis B is endemic. Sporadic outbreaks of avian influenza (bird flu) have resulted in a small number of human deaths. Rabies is present and may be a concern if travelling or trekking through rural parts of Tibet. If bitten, medical advice should be sought immediately.
Medical infrastructure is poor in Tibet and services are almost non-existent in rural areas outside of Lhasa. Medical insurance is strongly advised and should include evacuation insurance. The nearest recommended medical facilities are in Chengdu and Kathmandu. Traditional Tibetan medicinal treatments are available in Lhasa.
Food and drink:
All water used for drinking, brushing teeth or freezing (ice cubes) should first be boiled or otherwise sterilised. Bottled water is widely and cheaply available. Be especially careful when eating at small street-side stalls or restaurants where standards of hygiene may not be high. Vegetables should be cooked and fruit peeled.
Bubonic Plague: Although rare, there are cases of bubonic plague every few years in remote areas of Tibet. Try to avoid eating rodent meat, especially from marmots, as much as possible.

220 volts AC, 50Hz. However, most 4- and 5-star hotels are also wired for the use of 110-volt appliances. Round or flat two-pin plugs and flat, angled three-pin plugs are use.

Currency information:
1 Renminbi Yuan (CNY; symbol ¥) = 10 jiao/mao. Notes are in denominations of ¥100, 50, 20, 10, 5, and 1. Coins are in denominations of Y1, 0.5 and 1 jiao/mao. Counterfeit ¥100 notes are commonplace. The Yuan is often referred to as the ‘kuai’ in street slang.
Credit cards:
Credit/debit cards (Visa, Diners Club, MasterCard, American Express etc) are accepted in top-end hotels in Lhasa but are of very limited use elsewhere.
ATM:
ATMs are available in many towns, though those in Lhasa and Shigatse are most reliable. Cash advances from a credit card are available in Lhasa.

Lhasa and several other cities have public telephone booths where you can make fairly cheap international phone calls (around £0.35 per minute to the UK). The cheapest way to make calls is through Skype, though not all Internet cafés are equipped with the software. Another way to call internationally is to buy a pre-paid calling card, available from most convenience stores in units of ¥20, 50, 100 and 200.

Mobile phone: Tibet's mobile phone coverage is good and you can even make phone calls from Everest Base Camp! Roaming agreements exist with most major international mobile phone companies. Alternatively, you can buy a prepaid GSM SIM card (from China Mobile) that allows you to use your mobile like a local phone with a new number. You'll need your passport to register. Buy scratch cards to top up your balance.

Tibet's history has long been dominated by its powerful neighbour China. The early Tibetan empire was one of Asia's largest, even beating the Chinese capital Xian in 763 AD. The arrival of Buddhism in the eighth and ninth centuries fundamentally reshaped the nation's psyche, transforming the warring empire into one of the world's most spiritually advanced centres.
Tibet was first conquered by an outside power, the Mongolians, during the Yuan Dynasty (1271-1368 CE). But with the rise of the Ming Dynasty there was a brief period of sovereignty until the Mongols took over again in the mid 15th century by supporting the Dali Lama who had fled to Mongolia. Mongolian clans had on and off political control of Tibet until the Tibetans appealed to the new Qing Dynasty to remove the Mongolians in the late 17th century. At that point Tibet in the official view of international politics became a tribute state to the Qing Dynasty. Although the presence of the Qing Dynasty was not felt by the average Tibetan, the Qing government did have bureaucrats and troops stationed in Lhasa, the capital of the Tibetan Autonomous Region. With the decline of the Qing Dynasty, in the mid 19th century, the mountain kingdom of Tibet gained more and more autonomy and by the 1890s Tibet was independent in every aspect accept in name. Any dream of an independent Tibet at that time was ended in 1912 when the new Republic of China paid all the debts of the Qing Dynasty in order to maintain the internationally recognized borders of the Qing Dynasty. Dealing with internal and external threats the Republic Government did not have the resources to influence any control over the internal running of the Tibetan Autonomous Region but the Republic government used international pressure to make sure other countries did not recognize the Tibetan Autonomous Region as an independent country.
When the Communists defeated the Republic in 1949 they quickly turned their peasant army towards the “liberation” of the Tibetan Autonomous Region. By 1951 the TAR was incorporated into China, with limited resistance, by the signing of the 17 point agreement. If the 17 point agreement had been honored the Tibetan Autonomous Region would roughly have a similar government relationship with Beijing that Hong Kong has today. But due to conservative Tibetans and Communists the tensions escalated until the 1959 uprising during which the Dali Lama fled the Tibetan Autonomous Region to India. In 1965 the 17 point agreement was nullified and the Tibetan Autonomous Region was established. Since that time the degree that the Tibetan Autonomous Region is actually autonomous has changed with who ever is currently in charge in Beijing.
Today Tibet's economy is booming and tourism is big business with over two million visitors a year, most of them Chinese. The Communist leadership points to huge investment in infrastructure, airports and the controversial railway line as proof of its commitment to improving the lives of Tibet's people. Frustrated Tibetans on the other hand point to mass Chinese immigration, limited employment opportunities and state interference in religious affairs. With China refusing to engage the Dalai Lama in any meaningful way, Tibet's future remains at best uncertain.

The Tibetan Autonomous Region is considered a high altitude plateau with high altitude lakes and stunning peaks. Most of the province is used for yak grazing because it is one of the few domesticated animals that can live up there. Tibet shares international borders with India, Nepal, Bhutan and Myanmar. Tibet has some of the world's tallest mountains, with several of them making the top ten list. Mount Everest, at 8,848 metres, is the highest mountain on earth, located on the border with Nepal. Several major rivers have their source in the Tibetan Plateau (mostly in present-day Qinghai Province). These include Yangtze, Yellow River, Indus River, Mekong, Ganges, Salween and the Yarlung Tsangpo River (Brahmaputra River). The Yarlung Tsangpo Grand Canyon is among the deepest and longest canyons in the world. The Indus and Brahmaputra rivers originate from a lake (Tso Mapham) in Western Tibet, near Mount Kailash. The mountain is a holy pilgrimage site for both Hindus and Tibetans. The Hindus consider the mountain to be the abode of Lord Shiva. The Tibetan name for Mt. Kailash is Khang Rinpoche. Tibet has numerous high-altitude lakes referred to in Tibetan as tso or co. These include Qinghai Lake (Koko Nor) which is the largest lake in the People's Republic of China.

Tibetans are generally very easy to get along with. Always walk clockwise around a stupa, religious statue or a mani wall (wall made from stones engraved with religious mantras) and spin prayer wheels clockwise. Don't smoke or talk loudly in a monastery. Don't attend sky burials if uninvited and even then never take photographs. Tibetans will often present an honoured guest or visitor with a white silk scarf known as a kathak.
Avoid discussing politics with your guide or monks as you can never be sure who is listening or watching. Don't take photographs of bridges, military installations or the army and avoid getting caught up in political disturbances.

The Khampas warriors were members of a Tibetan armed group which fought against China's occupation of Tibet from the 1950's until its downfall in 1974. Also called Buddha's Warriors, the groups main aim was to defend and preserve the Tibetan way of life after communist China invaded the western region in 1950, destroying the monasteries in eastern Tibet in 1956.

Initially forced into an uneasy compromise with Beijing, the Dalai Lama fled to India in 1959 and the local Khampas tribesmen revolted, forming a resistence movement which employed mainly guerilla tactics against the Chinese army. They set up base camps in a remote Himalayan region bordering Tibet, called Mustang, but life was hard and food was sparse and it has been said that many Khampas resorted to boiling their shoes to eat.

Khampas warriors were known to be skilled horsemen and they would gallop out of Mustang into Tibet to harrass the Chinese and then gallop back again. The annual horse festivals are a celebration of Khampas history and an opportunity for them to show their skills on horseback - with riders hanging of the sides of their saddles and scooping silk scarves from the ground at a full gallop, or twirling muskets over their heads and firing at targets on the ground.

Both of our horseback trails in Tibet include a horse festival attended by Khampas warriors: Tagong or Shamalong.