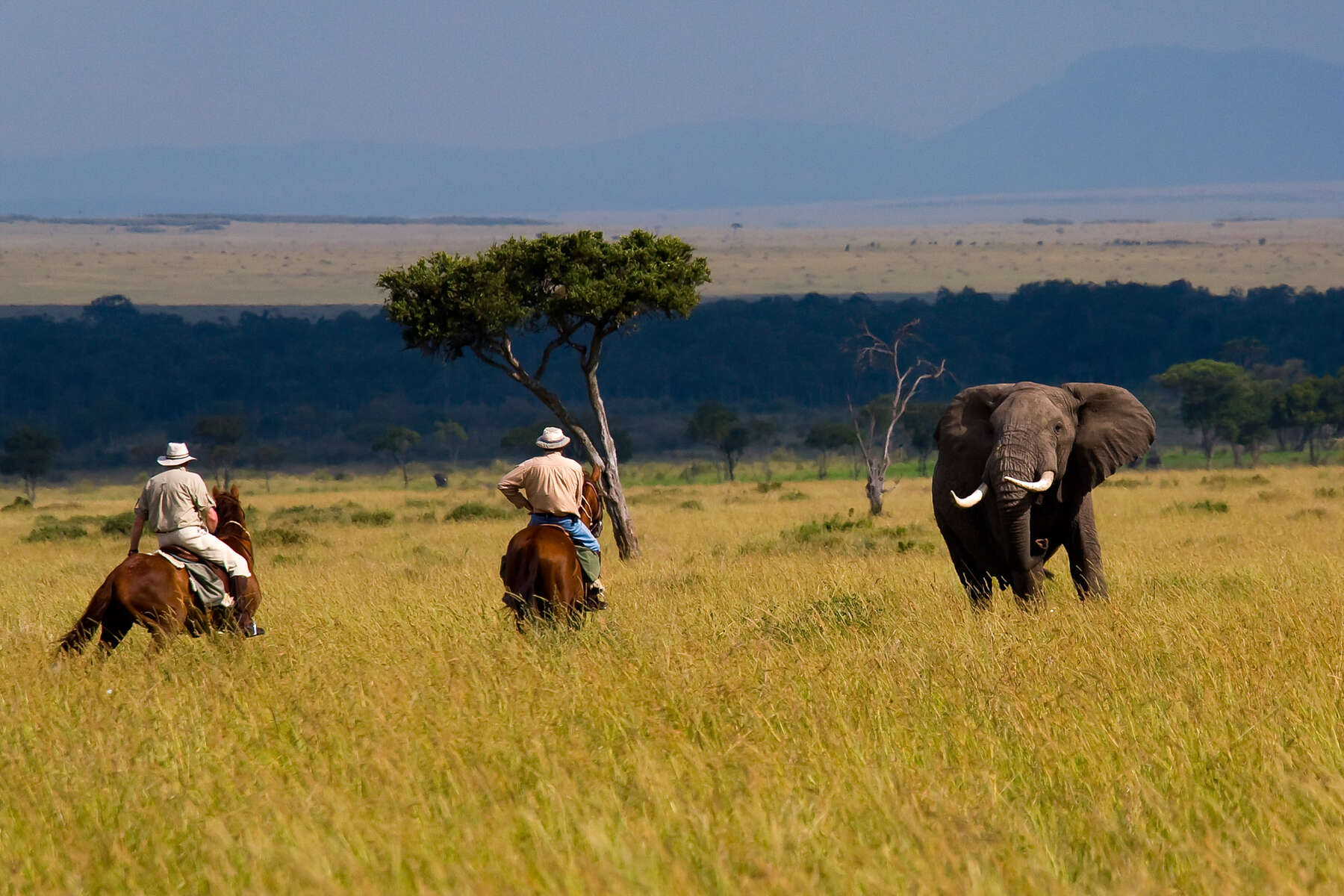 Kenya is synonomous with horseback safaris - the wide open plains of the Maasai Mara and the annual migration of wildebeest and zebra are world-renowned events. Mobile riding safaris through the mara are luxurious and exhilarating for competent riders with strong chances of seeing the Big Five - elephant, lion, leopard, rhino and buffalo. Kenya also offers lodge based riding safaris for all abilities in five-star comfort in the shadow of Mount Kenya - a safari destination for the whole family.
See all our trips 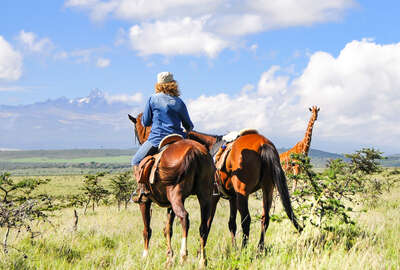 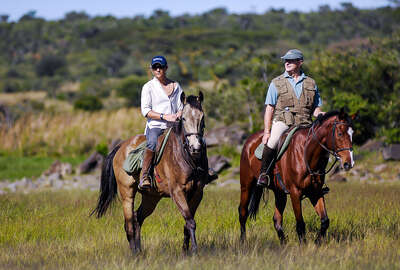 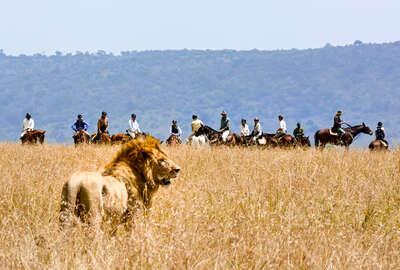 Visas
You need a visa to enter Kenya. Kenyan entry visas are exclusively issued electronically, with passengers required to obtain their e-visas before departure. You can apply for single entry and transit visas on the e-visas website: http://evisa.go.ke/evisa.html


Passport validity
Your passport should be valid for a minimum period of 6 months from the date of entry into Kenya. Make sure you have two blank pages in your passport on arrival.

There are no vaccinations legally required to travel to Kenya except that you need a yellow fever vaccination if you have travelled to a country (7 days or less before entering Kenya) where that disease is widely prevalent. A yellow fever vaccination is generally recommended anyway!
It's advisable to get your vaccinations in order before travelling to Kenya. The general vaccination against Diphtheria, Tetanus and Polio (DTP) is recommended. Also Hepatitis A and Typhoid are usually recommended.
If you are staying longer than 3 months or have a particular risk (travelling by bike, handling of wild animals, visits to caves) you might consider a rabies vaccination. Vaccination against Tuberculosis and Hepatitis B are also sometimes recommended for stays longer than 3 months.
Like most African countries south of the Sahara, Malaria is prevalent in the country. Don't underestimate this tropical disease and take precautions. Buy repellent (preferably with 50% DEET), and sleep under a net.

It is a condition of your booking with Equus Journeys that you have travel insurance which covers you for the riding activities to be undertaken. Your travel insurance should cover you for medical expenses and repatriation. Your guides will require your travel insurance details before they allow you to ride and may refuse to let you ride if you cannot provide them. You should take your insurance documents with you.Vous devez absolument être assuré en assistance et rapatriement pour participer à nos voyages.

MasterCard and Visa are widely accepted; American Express and Diners Club less so. Major hotels now also accept payment by credit card, as do major safari companies, travel agencies and restaurants. Almost every bank now has an ATM, and they are increasingly being installed at petrol stations.

Capital: Nairobi
Area: 580,367 sq km (224,000 sq miles).
Population: 44 million (2013).
Population density:
75.9 per sq km.
Language: Swahili. English is widely spoken and there are over 42 ethnic languages spoken, including Kikuyu and Luo.
Religion: About 80% of Kenya’s population is Christian (mostly Catholic and Protestant) and the majority of people living along the coast are Muslim. A small number follow traditional religions and there are some Sikhs and Hindus.
Political regime: Republic
President: Uhuru Kenyatta since 2013

The Kenyan economy is largely agricultural and its biggest exports in this sector are tea, coffee and vegetables. Kenya is also one of the few African countries with a significant dairy industry.
The manufacturing sector produces cement, paper, textiles, rubber and metal products amongst other goods. The post-election crisis of 2008, coupled with the global recession, reduced Kenya’s GDP growth to 1.7%. Since then the economy has improved significantly and, by the end of 2012, GDP growth was 4.5%. Unemployment was estimated to be 40% in 2011.
Tourism is big business in Kenya, bringing in roughly US$1 billion annually. Visitor numbers reached a record high of 1.26 million in 2011, but have since slumped due to concerns about terrorism and wildlife poaching.

Archaeological excavations in northern Kenya suggest that the region was home to ape-like creatures from whom Homo sapiens descended at least six million years ago. Over the past few millennia, Kenya has been settled by a large number of migrants from all over Africa, among the most recent arrivals being the Maasai, who crossed from present-day South Sudan in the 17th century.
The mediaeval Kenyan coast was a prosperous maritime trade centre serving ships from Arabia and Asia. Many modern ports, including Lamu and Mombasa, date from this era. The Portuguese arrived on the coast in the early 16th century, followed by Omani Arabs in the 18th century, and the British in the mid-19th century.
It was only in the 1890s that outsiders penetrated far into the interior, resulting in the British construction of the 'lunatic line' from Mombasa to Kampala in Uganda. Nairobi, founded as a staging point along the railway, became the headquarters of the British colonial administration.
In the early 20th century, the fertile highlands around Nairobi attracted an influx of European settlers. This resulted in a liberation movement demanding greater territorial, economic and political rights for locals. Led by Jomo Kenyatta, the fight for independence gathered pace after World War II, culminating in the 1950s with a bloody three-year guerrilla war between the Mau Mau and the British colonial authorities.
Kenya was granted independence in 1963, and the Kenyan African National Union (KANU), led by Kenyatta, took power. Kenyatta died in 1978, and was succeeded by Daniel Arap Moi, an autocrat who banned opposition parties outright in 1982. A multi-party system was restored in the early 1990s, but Moi remained in power until the 2002 election, which was won by the National Alliance Rainbow Coalition (NARC), led by Mwai Kibaki, who became the country's third president.
Disputed 2007 elections resulted in widespread violence in which hundreds were killed. Following this violence, international mediators negotiated an agreement retaining Kibaki as President but installing his main rival Raila Odinga as Prime Minister. The more peaceful 2013 elections saw Uhuru Kenyatta (son of Jomo), leader of the National Alliance party, elected president.

Kenya sits astride the equator and shares borders with Ethiopia in the north, Sudan in the northwest, Uganda in the west, Tanzania in the south and Somalia in the northeast. To the east lies the 300 mile Indian Ocean coastline. The country is divided into four regions: the arid deserts of the north; the savannah lands of the south; the fertile lowlands along the coast; and highlands in the west, where the capital Nairobi is situated.
Northwest of Nairobi runs the Rift Valley, dotted with lakes and containing the town of Nakuru, while further west the Aberdare National Park is overlooked by Kenya’s highest peak, and Africa’s second tallest mountain after Mount Kilimanjaro, Mount Kenya (5,200m/17,000ft), which also is a national park. In the far northwest is Lake Turkana (formerly Lake Rudolph), and in the southwest is Kenya's share of Lake Victoria. ). The Kakamega Forest in western Kenya is relic of an East African rainforest. Much larger is Mau Forest, the largest forest complex in East Africa.

Area:
580,367 sq km (224,000 sq miles).
Population:
44 million (2013).
Population density:
75.9 per sq km.
Capital:
Nairobi.
Government:
Republic. Gained independence from the UK in 1963.
Head of state:
President Uhuru Kenyatta since 2013.
Head of government:
President Uhuru Kenyatta since 2013.
About 80% of Kenya’s population is Christian (mostly Catholic and Protestant) and the majority of people living along the coast are Muslim. A small number follow traditional religions and there are some Sikhs and Hindus.
Western European habits prevail throughout much of Kenya as a result of British influences in the country. Kenyans are generally very friendly. The standard greeting of 'hello' when addressing an individual is Jambo, to which the reply is also Jambo. People are delighted if visitors can greet them in Kiswahili. Kiswahili is the national language and English is the official language. The terms Swahili and Kiswahili are used interchangeably, though the term Swahili normally refers to the people while Kiswahili refers to the language. There are over 42 ethnic languages spoken, including Kikuyu and Luo.
Dress is informal and casual lightweight clothes are accepted for all but the smartest social occasions. Because of its Muslim influence, the coast is a little more conservative than the rest of the country. Away from the beach, women and men should dress respectably and cover up bare arms and legs. Alcohol is only available in the tourist areas on the coast.

The opportunity to see big game from horseback in this beautiful country began back in the early 1970's. Offering some of the best opportunities to see large herds of wildlife, sometimes as far as the eye can see in an area unspoiled natural beauty. At certain times of the year you get the chance to canter across the savannah in the company of the migrating zebra and wildebeest.

Whether you chose the traditional luxury mobile tented camp around the Maasai Mara or the centre-based lodge ride, great game viewing and superb accommodation awaits you. Ride beautiful horses across the plains in search of big game at the foothills of Mount Kenya or submerge yourself in the vastness of the Maasai Mara. There is no bigger thrill than the chance of seeing the Big Five from horseback and Kenya is a truly unspoilt country where you will be immersed in the local traditions.