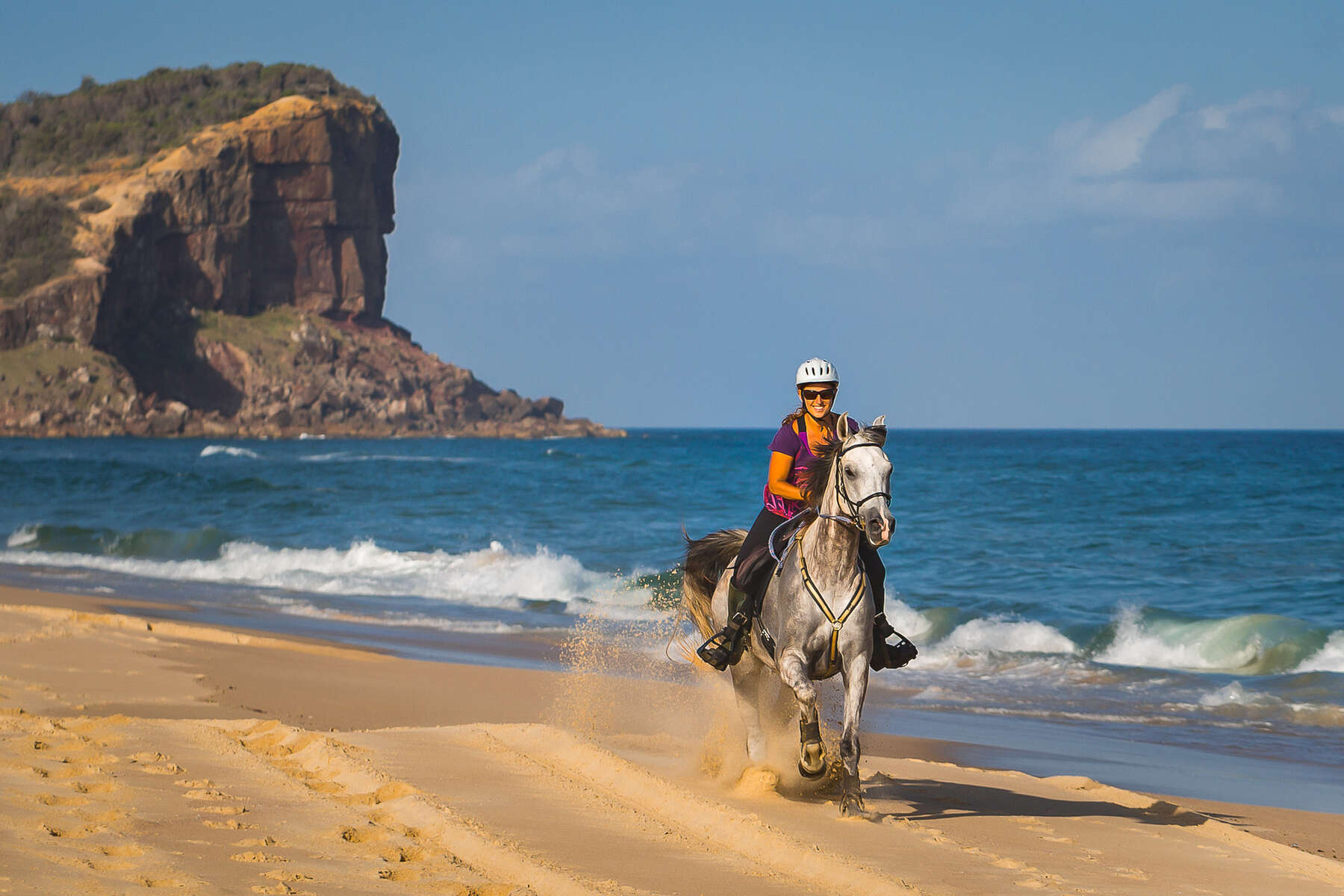 Riding in Australia, is venturing to the edge of the world in the saddle. A whole continent lies before you, and exploring it (or some of it!) on horseback is a dream for many. Look to the east, where endurance riding and eventing are popular amongst riders. In the mountains of Victoria, the Northern Territory, and Queensland, wild brumbies still roam free. In the Northern Territory and the Kimberleys, Australian ranch horses ridden by Jillaroos are used for cattle work and cattle drives. Trail riding and horseback holidays in Australia offer endless gallops on deserted beaches, the chance to spot local wildlife, and visits to local wineries to finish off the day with a blast!
See all our trips

eVisitor:
This is a free visa for multiple visits to Australia for tourism or business purposes for up to three months at a time within a 12-month period. This visa is available to passport holders from a number of European countries and it cannot be extended.

Electronic Travel Authority visa:
This visa allows you to visit Australia as many times as you want, for up to a year, and stay for three months each visit. This visa is available to passport holders from a number of countries and regions, who live outside Australia. There is no visa application charge for an ETA, however a $20 service charge applies for online applications only.

Visitor visa:
The Visitor visa is designed for people who are not eligible for the eVisitor or Electronic Travel Authority visa. This visa allows you to visit Australia, either for tourism or business purposes, for up to three, six or 12 months. Applicants will have to pay a fee to submit their application.

If you hold an ePassport you can use SmartGate to pass through passport control when arriving in Australia. See the Australian Border Force website for more information: https://www.abf.gov.au/entering-and-leaving-australia/smartgates

Before visiting Australia you may need to get the following vaccinations or take the following precautions. It is best to seek medical advice as your individual health and your planned activities will be a factor. Seek advice 4-6 weeks before travel.

Routine and Recommended Vaccinations
It is recommended that travellers are up to date on routine vaccinations including measles-mumps-rubella (MMR), diphtheria-pertussis-tetanus (DPT), varicella (chickenpox), polio, and yearly flu shots.
As hepatitis A outbreaks occur throughout the world and sometimes in countries with a low risk for hepatitis A, travellers should consult with their doctor prior to travel to see if the hepatitis A vaccine is necessary.
A hepatitis B vaccination is recommended for those who may have sexual contact with a new partner, who may get a tattoo or piercing, or have any medical procedures.
Travellers may need a Japanese Encephalitis vaccination depending on their travel plans, particularly if they will be in Australia longer than a month or plan to visit rural areas or spend significant time outdoors. Consultation with a doctor regarding this vaccination should be sought prior to travel. For further information on this recommendation, please visit the CDC Japanese Encephalitis Advice.
A rabies vaccination is recommended for those planning an outdoor holiday, for wildlife professionals and researchers, or for those who may come into contact with bats.

The standard of healthcare in Australia is very good. Under the reciprocal healthcare arrangements, British citizens resident in the UK and travelling on a British passport are entitled to limited subsidised health services from Medicare for medically necessary treatment while visiting Australia. This does not cover pre-existing conditions, or treatment that does not need prompt attention. These provisions do not apply to non-visitors, for example those who are studying in Australia. Other exclusions under the reciprocal agreement include pharmaceuticals when not a hospital in-patient, use of ambulance services and medical evacuations, which are very expensive.

If you need emergency medical assistance during your trip, dial 000 and ask for an ambulance. You should contact your insurance/medical assistance company promptly if you’re referred to a medical facility for treatment.

The plugs in Australia have two flat metal pins, forming an inverted ‘V’ shape, and occasionally a third pin in the centre. The electrical current in Australia is 220-240 volts, AC 50Hz.

The Australian dollar (sign: $; code: AUD) is the currency of Australia, including its external territories: Christmas Island, Cocos (Keeling) Islands, and Norfolk Island.

Currency exchange is available at banks, hotels and international airports. Australian banks offer the same range of services typical in other western nations, and Automated Teller Machines (ATMs) are widespread, although facilities may be limited in remote towns and the outback. EFTPOS (our electronic payment system) is widely available in most Australian shops, restaurants and hotels, allowing you to pay for purchases with your credit or debit card. Fees may be charged on transactions, particularly if withdrawing from an international account, so it is advised you check with your bank before travelling.

Australia has been called “the Oldest Continent,” “the Last of Lands,” and “the Last Frontier.” Those descriptions typify the world’s fascination with Australia, but they are somewhat unsatisfactory. In simple physical terms, the age of much of the continent is certainly impressive—most of the rocks providing the foundation of Australian landforms were formed during Precambrian and Paleozoic time (some 4.6 billion to 252 million years ago)—but the ages of the cores of all the continents are approximately the same. On the other hand, whereas the landscape history of extensive areas in Europe and North America has been profoundly influenced by events and processes that occurred since late in the last Ice Age—roughly the past 25,000 years—in Australia scientists use a more extensive timescale that takes into account the great antiquity of the continent’s landscape.

Australia has a federal form of government, with a national government for the Commonwealth of Australia and individual state governments (those of New South Wales, Victoria, Queensland, South Australia, Western Australia, and Tasmania). Each state has a constitution, and its government exercises a limited degree of sovereignty. There are also two internal territories: Northern Territory, established as a self-governing territory in 1978, and the Australian Capital Territory (including the city of Canberra), which attained self-governing status in 1988. The federal authorities govern the external territories of Norfolk Island, the Cocos (Keeling) Islands, Christmas Island, Ashmore and Cartier islands, the Coral Sea Islands, and Heard Island and McDonald Islands and claim the Australian Antarctic Territory, an area larger than Australia itself. Papua New Guinea, formerly an Australian external territory, gained its independence in 1975.

Historically part of the British Empire and now a member of the Commonwealth, Australia is a relatively prosperous independent country. Australians are in many respects fortunate in that they do not share their continent—which is only a little smaller than the United States—with any other country. Extremely remote from their traditional allies and trading partners—it is some 12,000 miles (19,000 km) from Australia to Great Britain via the Indian Ocean and the Suez Canal and about 7,000 miles (11,000 km) across the Pacific Ocean to the west coast of the United States—Australians have become more interested in the proximity of huge potential markets in Asia and in the highly competitive industrialized economies of China, Japan, South Korea, and Taiwan. Australia, the continent and the country, may have been quite isolated at the beginning of the 20th century, but it entered the 21st century a culturally diverse land brimming with confidence, an attitude encouraged by the worldwide fascination with the land “Down Under” and demonstrated when Sydney hosted the 2000 Olympic Games.

Australia’s isolation from other continents explains much of the singularity of its plant and animal life. Its unique flora and fauna include hundreds of kinds of eucalyptus trees and the only egg-laying mammals on Earth, the platypus and echidna. Other plants and animals associated with Australia are various acacias (Acacia pycnantha [golden wattle] is the national flower) and dingoes, kangaroos, koalas, and kookaburras. The Great Barrier Reef, off the east coast of Queensland, is the greatest mass of coral in the world and one of the world’s foremost tourist attractions. The country’s low relief results from the long and extensive erosive action of the forces of wind, rain, and the heat of the sun during the great periods of geologic time when the continental mass was elevated well above sea level.

Australia is both the flattest continent and, except for Antarctica, the driest. Seen from the air, its vast plains, sometimes the colour of dried blood, more often tawny like a lion’s skin, may seem to be one huge desert. One can fly the roughly 2,000 miles (3,200 km) to Sydney from Darwin in the north or to Sydney from Perth in the west without seeing a town or anything but the most scattered and minute signs of human habitation for vast stretches. A good deal of the central depression and western plateau is indeed desert. Yet appearances can be deceptive. The red and black soil plains of Queensland and New South Wales have long supported the world’s greatest wool industry, and some of the most arid and forbidding areas of Australia conceal great mineral wealth.

Australia, the smallest continent and one of the largest countries on Earth, lying between the Pacific and Indian oceans in the Southern Hemisphere. Australia’s capital is Canberra, located in the southeast between the larger and more important economic and cultural centres of Sydney and Melbourne.