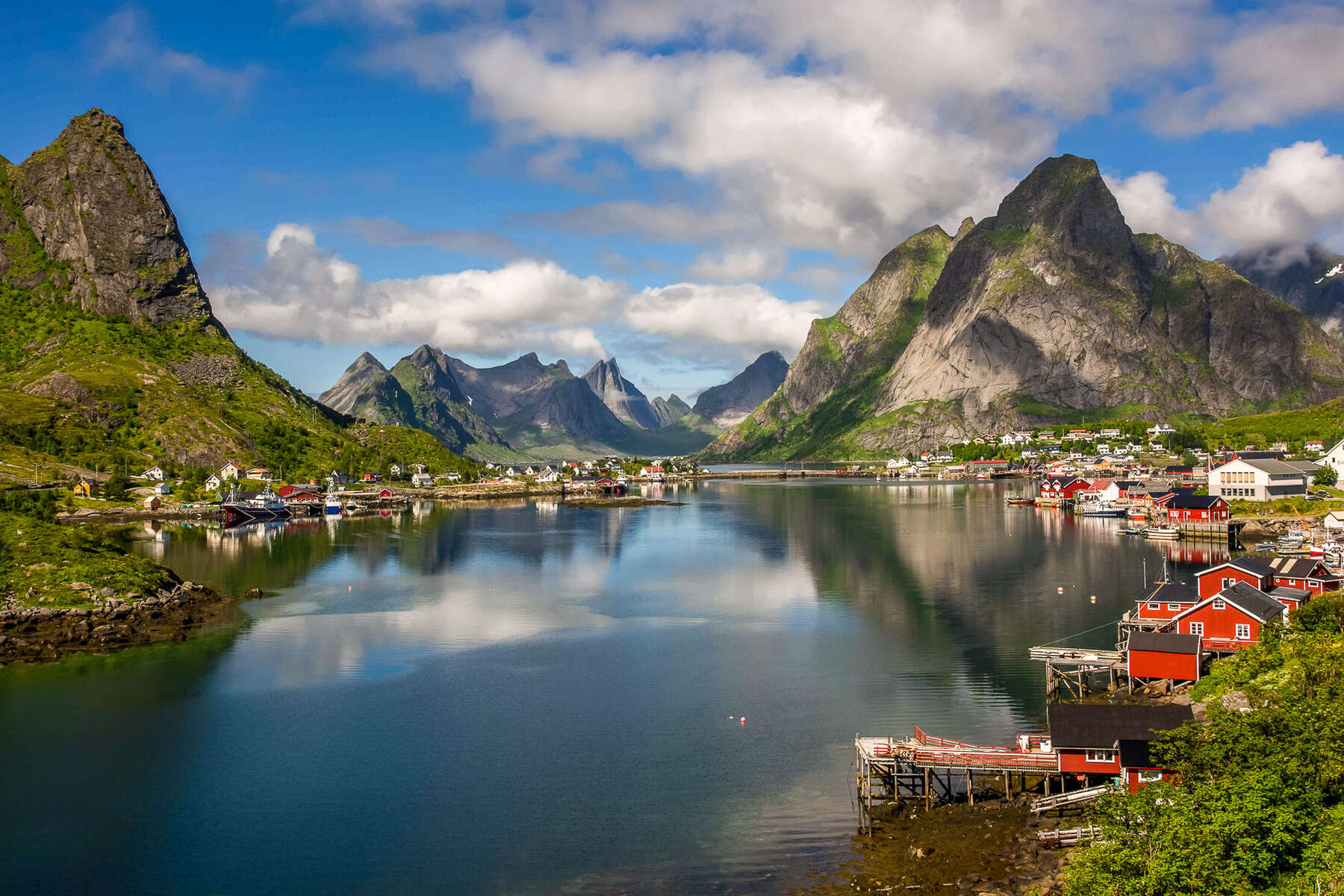 Explore Norway on a riding adventure

The westernmost country in Scandinavia, Norway has remained wild and rugged at heart. Horseback riding and trail rides in Norway offer picture-perfect scenery, from colourful wooden cabins to hidden fjords and dramatic mountainous landscapes, boreal forests and of course, the northern lights. In the summer, enjoy the midnight sun - a surreal experience. In the winter, the northern lights come out to play over snow-capped mountains. All year-round, a trip to Norway is a memorable holiday, and especially if experienced on horseback!
See all our trips 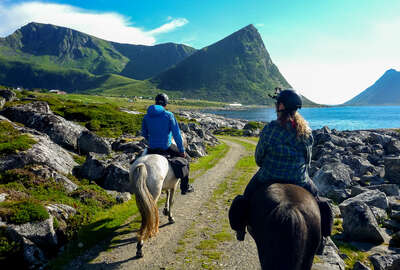 The Lofoten Islands of Norway

Visas
The rules for travelling or working in European countries changed on 1 January 2021:
- you can travel to countries in the Schengen area for up to 90 days in any 180-day period without a visa. This applies if you travel as a tourist, to visit family or friends, to attend business meetings, cultural or sports events, or for short-term studies or training.
- if you are travelling to Norway and other Schengen countries without a visa, make sure your whole visit is within the 90-day limit. Visits to Schengen countries within the previous 180 days before you travel count towards your 90 days.

At border control for Norway, you may need to:
- show a return or onward ticket
- show you have enough money for your stay, and
- use separate lanes from EU, EEA and Swiss citizens when queueing
- Your passport may be stamped on entry and exit.

At least 8 weeks before your trip, check the latest country-specific health advice from the National Travel Health Network and Centre (NaTHNaC) on the TravelHealthPro website. Each country-specific page has information on vaccine recommendations, any current health risks or outbreaks, and factsheets with information on staying healthy abroad. Guidance is also available from NHS (Scotland) on the FitForTravel website.

If you need emergency medical assistance during your trip, dial 113 and ask for an ambulance. If you are referred to a medical facility for treatment you should contact your insurance/medical assistance company immediately.

Our recommendation :
Cancellation and travel insurances are not included. Please note that insurance is mandatory. We recommend to take out an insurance policy as soon as your travel is booked in case of cancellation.

You need a power plug adapter in Norway, when living in the United Kingdom. In Norway the power plugs and sockets are of type F. The standard voltage is 230 V and the standard frequency is 50 Hz.

The Norwegian currency is the Norwegian Kroner (NOK). 1 NOK is divided into 100 øre (cents). Coins are circulated in the following denominations: 1 krone, 5 kroner, 10 kroner and 20 kroner.

About one-fourth of Norway’s commodity imports are food and consumer goods (including motor vehicles); the rest consists of raw materials, fuels, and capital goods. The rate of reinvestment has been high in Norway for a number of years. This is reflected in the relatively steady employment in the building and construction industry. Rapid growth, however, has been registered in commercial and service occupations, as is the case in most countries with a high standard of living.

The history of Norway has been influenced to an extraordinary degree by the terrain and the climate of the region. About 10,000 BC, following the retreat of the great inland ice sheets, the earliest inhabitants migrated north into the territory which is now Norway. They traveled steadily northwards along the coastal areas, warmed by the Gulf Stream, where life was more bearable. In order to survive they fished and hunted reindeer (and other prey). Between 5,000 BC and 4,000 BC the earliest agricultural settlements appeared around the Oslofjord. Gradually, between 1500 BC and 500 BC, these agricultural settlements spread into the southern areas of Norway – whilst the inhabitants of the northern regions continued to hunt and fish.

The Neolithic period started in 4000 BC. The Migration Period caused the first chieftains to take control and the first defenses to be made. From the last decades of the 8th century Norwegians started expanding across the seas to the British Isles and later Iceland and Greenland. The Viking Age also saw the unification of the country. Christianization took place during the 11th century and Nidaros became an archdiocese. The population expanded quickly until 1349 (Oslo: 3,000; Bergen: 7,000; Trondheim: 4,000)[citation needed] when it was halved by the Black Death and successive plagues. Bergen became the main trading port, controlled by the Hanseatic League. Norway entered the Kalmar Union with Denmark and Sweden in 1397.

After Sweden left the union in 1523, Norway became the junior partner in Denmark–Norway. The Reformation was introduced in 1537 and absolute monarchy imposed in 1661. In 1814, after being on the losing side of the Napoleonic Wars with Denmark, Norway was ceded to the king of Sweden by the Treaty of Kiel. Norway declared its independence and adopted a constitution. However, no foreign powers recognized the Norwegian independence but supported the Swedish demand for Norway to comply with the treaty of Kiel. After a short war with Sweden, the countries concluded the Convention of Moss, in which Norway accepted a personal union with Sweden, keeping its Constitution, Storting and separate institutions, except for the foreign service. The union was formally established after the extraordinary Storting adopted the necessary amendments to the Constitution and elected Charles XIII of Sweden as king of Norway on 4 November 1814.

Industrialization started in the 1840s and from the 1860s large-scale emigration to North America took place. In 1884 the king appointed Johan Sverdrup as prime minister, thus establishing parliamentarism. The union with Sweden was dissolved in 1905. From the 1880s to the 1920s, Norwegians such as Roald Amundsen and Fridtjof Nansen carried out a series of important polar expeditions.

Shipping and hydroelectricity were important sources of income for the country. The following decades saw a fluctuating economy and the rise of the labor movement. Germany occupied Norway between 1940 and 1945 during the Second World War, after which Norway joined NATO and underwent a period of reconstruction under public planning. Oil was discovered in 1969 and by 1995 Norway was the world's second-largest exporter. This resulted in a large increase of wealth. From the 1980s Norway started deregulation in many sectors and experienced a banking crisis.

By the 21st century, Norway became one of the world's most prosperous countries with oil and gas production accounting for 20 percent of its economy. By reinvesting its oil revenues, Norway had the world's largest sovereign wealth fund in 2017.

Nearly half of the inhabitants of the country live in the far south, in the region around Oslo, the capital. About two-thirds of Norway is mountainous, and off its much-indented coastline lie, carved by deep glacial fjords, some 50,000 islands.

With the Barents Sea to the north, the Norwegian Sea and the North Sea to the west, and Skagerrak (Skager Strait) to the south, Norway has land borders only to the east—with Sweden, Finland, and Russia.

There are four traditional regions of Norway, three in the south and one in the Arctic north. The three main regions of the south are defined by wide mountain barriers. From the southernmost point a swelling complex of ranges, collectively called Lang Mountains, runs northward to divide eastern Norway, or Østlandet, from western Norway, or Vestlandet. The narrow coastal zone of Vestlandet has many islands, and steep-walled, narrow fjords cut deep into the interior mountain region. The major exception is the wide Jæren Plain, south of Stavanger. An eastward sweep of the mountains separates northern Østlandet from the Trondheim region, or Trøndelag. Northern Norway, or Nord-Norge, begins almost exactly at the midpoint of the country. Most of the region is above the Arctic Circle, and much of it is filled with mountains with jagged peaks and ridges, even on the many islands.

The Sámi people are indigenous to the Far North and have traditionally inhabited central and northern parts of Norway and Sweden, as well as areas in northern Finland and in Russia on the Kola Peninsula. Another national minority are the Kven people, descendants of Finnish-speaking people who migrated to northern Norway from the 18th up to the 20th century. From the 19th century up to the 1970s, the Norwegian government tried to assimilate both the Sámi and the Kven, encouraging them to adopt the majority language, culture and religion. Because of this "Norwegianization process", many families of Sámi or Kven ancestry now identify as ethnic Norwegian.