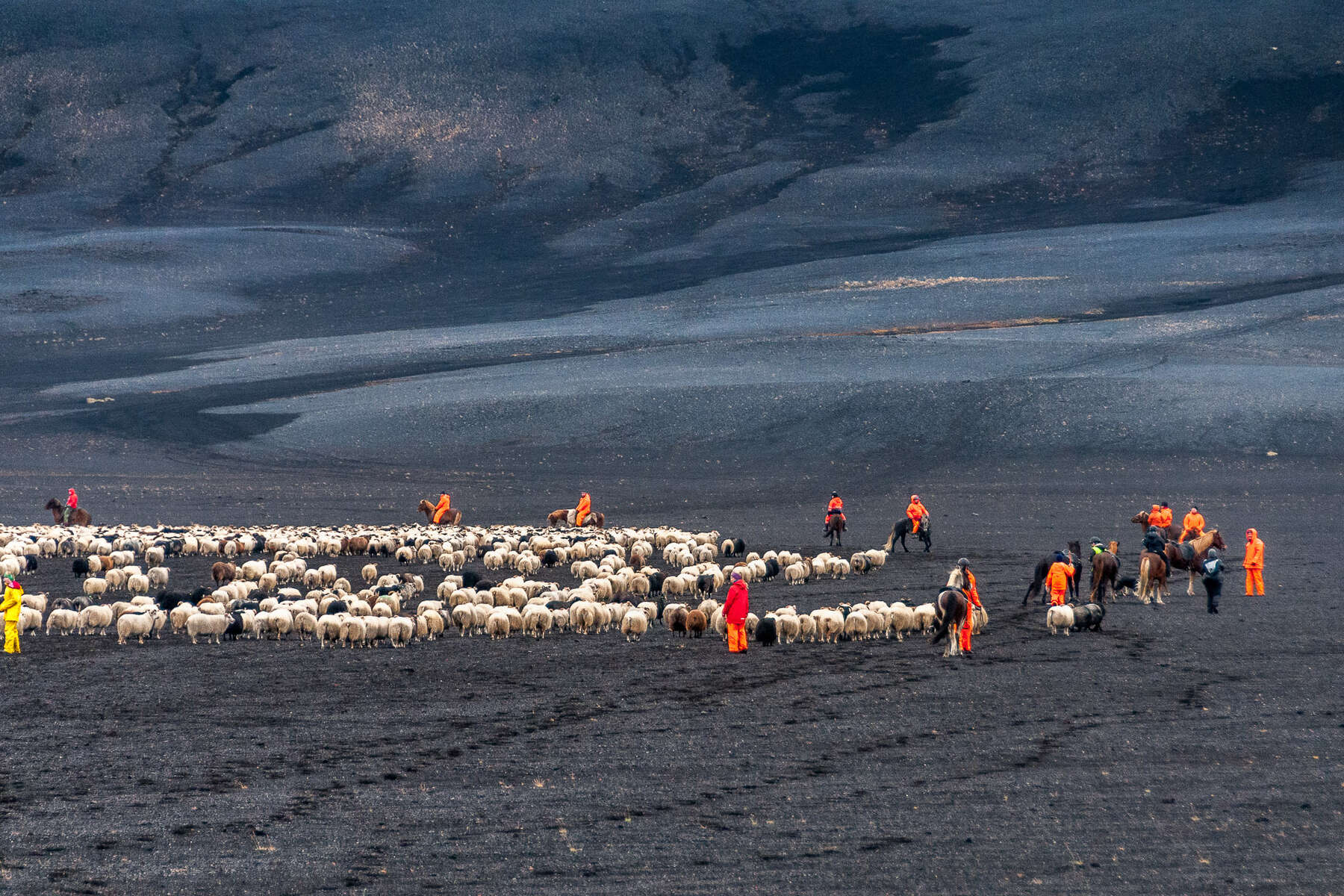 A riding holiday in Iceland is perfect for lovers of dramatic landscapes and fun riding. The "land of fire and ice" is home to glaciers, volcanoes, haunting volcanic lunar landscapes, lava fields, rivers and endless grassy plains. The Icelandic horse, a reminder of the country’s strong Viking roots, is a pleasure to ride with its unique extra gait - the tölt, a smooth 4-beat stride that allows for a comfortable fast-paced ride. Most horse riding trails in Iceland involve riding amongst a herd of free-running horses which is a truly exhilarating experience. A visit to Iceland at the end of the season means working alongside the local farmers and lending a hand on the annual, and vital, sheep and horse round-ups before the long winter falls.
See all our trips 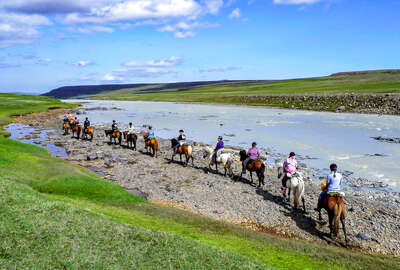 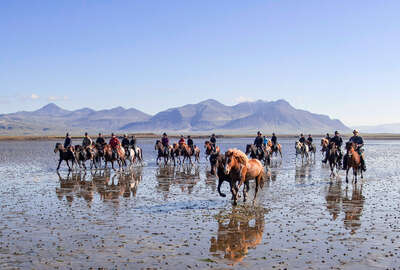 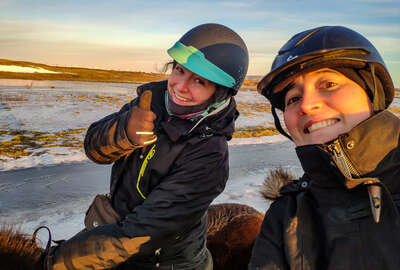 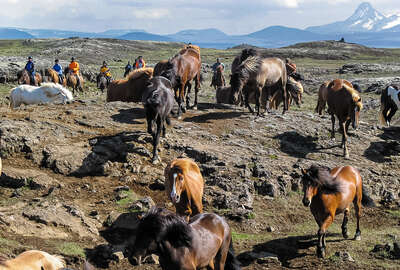 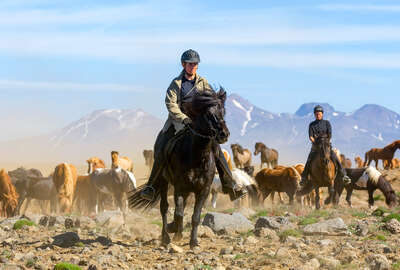 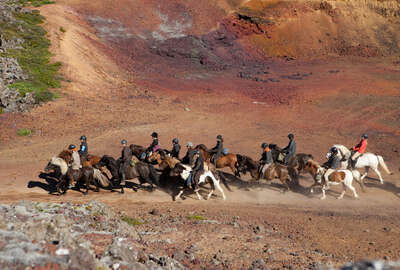 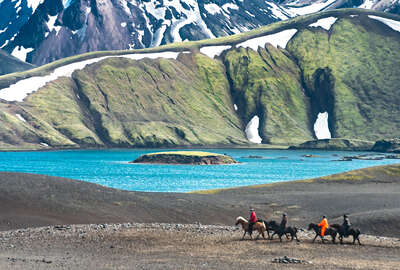 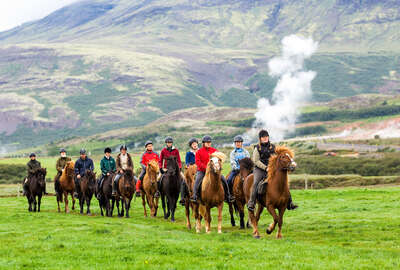 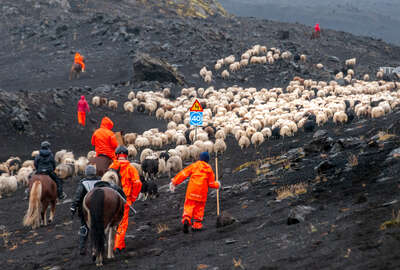 Visas
The rules for travelling or working in European countries changed on 1 January 2021:
- you can travel to countries in the Schengen area for up to 90 days in any 180-day period without a visa. This applies if you travel as a tourist, to visit family or friends, to attend business meetings, cultural or sports events, or for short-term studies or training.
- if you are travelling to Iceland and other Schengen countries without a visa, make sure your whole visit is within the 90-day limit. Visits to Schengen countries within the previous 180 days before you travel count towards your 90 days.

At border control for Iceland, you may need to:

- show a return or onward ticket
- show you have enough money for your stay, and
- use separate lanes from EU, EEA and Swiss citizens when queueing
- Your passport may be stamped on entry and exit.

Please visit for the FCO website for up-to-date information - https://www.gov.uk/foreign-travel-advice/iceland/entry-requirements

There are no vaccinations legally required to travel to Iceland. The country has a very good public health infrastructure with hospitals, good doctors and widely available pharmacies.
The biggest hazard in Iceland is probably the weather, especially when venturing inland along the difficult roads. You need a very sturdy high clearance 4wd vehicle and all supplies like food, water and fuel. Also, watch out for sudden storms and blizzards, even in the middle of summer. Also, after rain, some slow flowing small rivers might all of sudden turn into wide and deep rivers, almost impossible to cross by car. So if you do venture inland and away from the main roads, watch all of these things very closely.

The Icelandic currency is the króna (Ikr.). Coins come in denominations of five, ten, fifty and one hundred krónur and there are notes of 500, 1000, 2000 and 5000 krónur.
You don't have to bring lots of cash, because Iceland is a country where plastic money seems to have been invented and even small things can usually be bought by credit card. If you don't have one, most banking cards of your own country (Cirrus, Maestro logo) will be fine for taking money from ATM's and these can be found in almost every small town.
Tipping is not necessary in Iceland as taxes (VAT) and service are included in the price.

Iceland made headlines around the world in October 2008 when the country’s three banks suffered an economic collapse. Iceland was hit hard by the global recession, and as a result the Icelandic government had to step in and seize control of the country's biggest banks in a rescue operation that sent shockwaves around the island and beyond.
Until that point Icelanders enjoyed a per capita income that was amongst the highest in the world at US$38,000 (2007)/US$39,400 (2008 estimate). The country had been in a positive economic period; in 2007 economic growth was at 2.5% and unemployment at a very low 1%. The future is uncertain but the country has started to rally and with increasing numbers of tourists visiting for some of the best Northern Lights shows of recent times, as well as volcano tourism, there have been some positive signs.
Iceland is short of raw materials and so relies heavily on foreign trade; exports of goods and services account for more than one-third of GNP. The largest proportion of these derives from fishing, Iceland's most important export (40% of its export earnings). The economy is therefore particularly susceptible to fluctuating fish prices and maintains a broad fisheries exclusion zone of 320km (200 miles) to protect its earnings. The government remains opposed to EU membership, primarily because of concern about losing control over their fishing resources.
Aluminium smelters are playing an increasingly big part in Iceland's economy, and have polarized Icelanders in recent years. While some argue that the pristine nature of the interior should be preserved at all costs, others think it should be tapped to regenerate areas where traditional industries are no longer viable.

The first people believed to have visited Iceland were members of a Hiberno-Scottish mission or hermits, also known as Papar, who came in the 8th century or even as early as the second half of the 7th century. No archaeological discoveries support this theory; the monks are supposed to have left with the arrival of Norsemen, who systematically settled in the period circa AD 870–930. The first known permanent Norse settler was Ingólfur Arnarson, who built his homestead in Reykjavík in the year 874. In 930, the ruling chiefs established an assembly called the Alþingi (Althing). This parliament was founded as the political hub of the Icelandic Commonwealth. Christianity was adopted 999–1000. The Commonwealth lasted until 1262 when the political system devised by the original settlers proved unable to cope with the increasing power of Icelandic chieftains.

From the 14th century onwards to the late 18th century, Iceland was part of the Norwegian Crown, Norway-Denmark (Kalmar Union) and later under Danish rule. Lutheranism became the main religion and the last Catholic bishop in Iceland was beheaded in 1550, along with his two sons. Two Black Death and one smallpox epidemics killed about one third to a half of the population each time during these centuries.

In 1814, following the Napoleonic Wars, Denmark-Norway was broken up into two separate kingdoms via the Treaty of Kiel. Iceland, however, remained a Danish dependency. Throughout the 19th century, the country's climate continued to grow worse, resulting in mass emigration to the New World, particularly Manitoba in Canada. In 1874, Denmark granted Iceland a constitution and limited home rule, which was expanded in 1904. The Act of Union, an agreement with Denmark signed on 1 December 1918, recognised Iceland as a fully sovereign state under the Danish king. On 31 December 1943, the Act of Union agreement expired after 25 years. Iceland formally became an independent republic on 17 June 1944, with Sveinn Björnsson as the first president. Iceland became a NATO member in 1949.

The immediate post-war period was followed by substantial economic growth, driven by industrialisation of the fishing industry and Marshall aid. The 1970s were marked by the Cod Wars—several disputes with the United Kingdom over Iceland's extension of its fishing limits. The economy was greatly diversified and liberalised when Iceland joined the European Economic Area in 1994. During the period 2003–07, Iceland developed from a nation best known for its fishing industry into a global financial powerhouse, but was consequently hit particularly hard by the 2008 global financial crisis, which extended into 2009 and 2010.

Iceland, one of the most volcanically active countries in the world, is a large island in the North Atlantic close to the Arctic Circle.

The most significant of its seismic features is found at Þingvellir National Park along the Almannagja fault. This rift in the rock shows the direct point on the earth where the Mid-Atlantic Rift runs through the island, where the North American and European tectonic plates are moving apart at an average of 2cm per year. The dramatic valley is clear on the land here, and is also visible in nearby Þingvellir Lake where divers visit the Silfra rift to see the crack between the tectonic plates in more detail.

Equally, volcano tourism is big business, with walking routes near the Eyjafjallajokull volcano, helitours over it and scenic trips to nearby Hekla, its hitherto most famous volcano, all popular.

Five-sixths of Iceland is uninhabited, the population being concentrated on the coast, in the valleys and in the plains of the southwest and southeast of the country. More than half the population lives in or around Reykjavík, the capital. Akureyri in the north is the country’s second city.

The whole of the central highland plateau of the island is a beautiful but barren and uninhabitable moonscape - so much so that the first American astronauts were sent there for pre-mission training.

Eleven percent of the island is covered by three large glaciers. Iceland's highest and most extensive glacier is Vatnajökull; at 8,500 sq km (3,280 sq miles), it is the largest in Europe, although it is now reported to be melting. Vatnajökull National Park, established in 2008, is Europe’s largest national park, encompassing its namesake glacier as well as volcanoes, waterfalls and wetlands.

There are several smaller glaciers in the country, including Snaefellsjokull, visible from Reykjavík, which sits atop an ancient cone volcano and was the setting for Jules Verne’s Journey to the Centre of the Earth. Only 1% of the land in Iceland is cultivated, with 20% used for grazing sheep, Icelandic horses and cattle.

Visitors will find Iceland is a class-less society with a strong literary tradition. Handshaking is the normal form of greeting. An Icelander is called by his first name because his surname is made up of his father's Christian name plus 'son' or 'daughter' (eg John, the son of Magnus, would be called John Magnusson, while John's sister, Mary, would be known as Mary Magnusdóttir). People are addressed as Fru (Mrs) and Herra (Mr). Visitors will often be invited to homes, especially if on business, and normal courtesies should be observed. Icelanders pay careful attention to their appearance and, as for most Western countries, casual wear is widely acceptable although unsuitable for smart and social functions.

There are many options for a horse riding holiday in Iceland - short breaks, week-long trail rides or even longer. All abilities can be catered for as well - there are easy trails for novice riders and challenging routes for experienced riders. It is possible to return to Iceland many times and always ride across different landscapes...

At the end of the season there are also a number of Sheep round-ups and Horse round-ups for those who want a hands-on and participatory riding holiday.
If you are short of time, then there are some long weekend or short breaks on offer, such as the stunning Northern Lights trail. 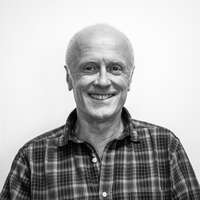