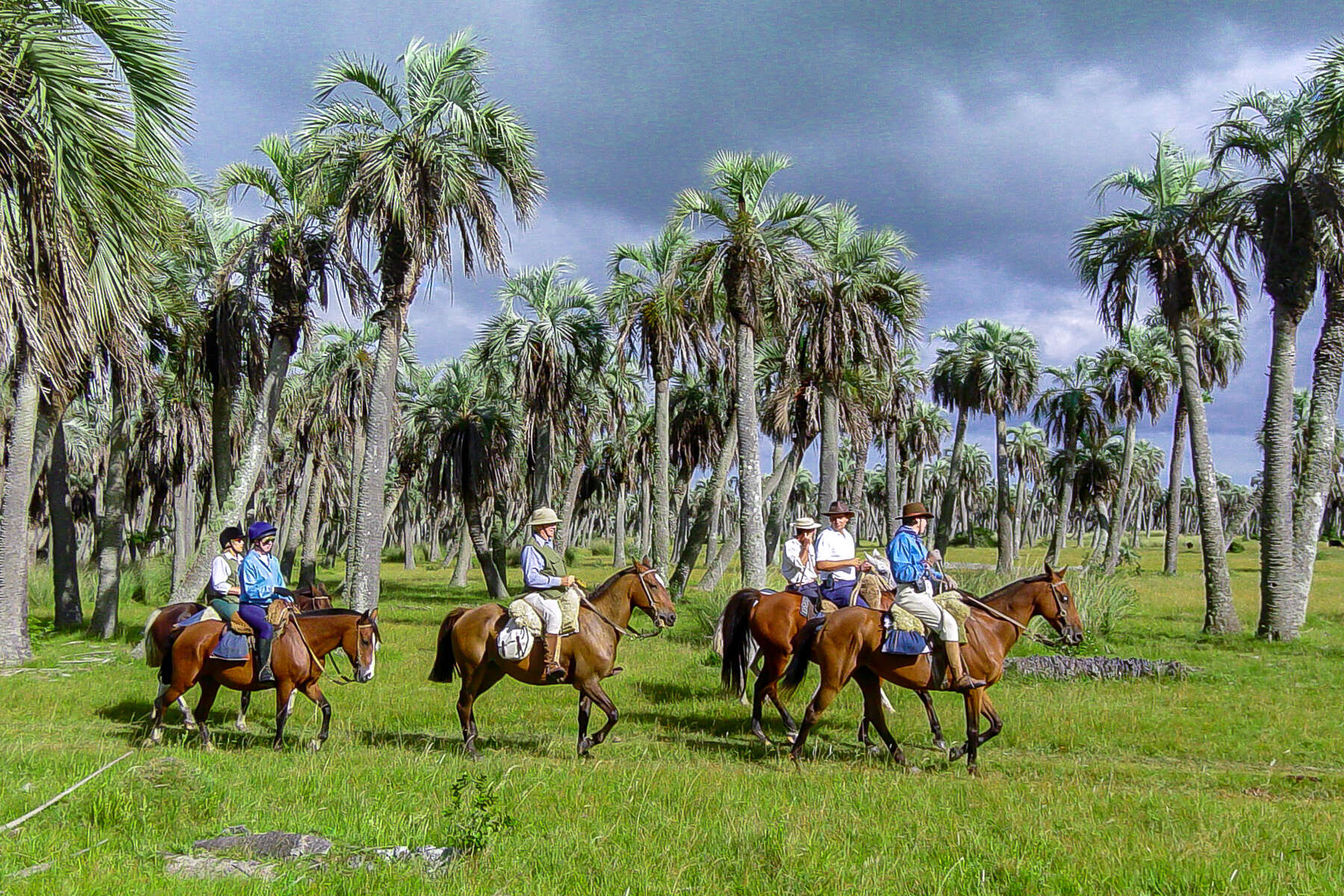 The ever-changing landscape and endless nature reserves in Uruguay make this a unique destination for a riding holiday. In the local Guarani language "Uruguay" means "the river of colourful birds" - a name which suits this country perfectly, with its many rivers flowing towards the Plata estuary. Nestled so close to Argentina, Uruguay is a land of pampas where the gaucho is king and equestrian traditions date back to the colonial Spanish. Trail ride across estancia lands and experience beach rides along the coastline on the back of local Criollo horses.
See all our trips 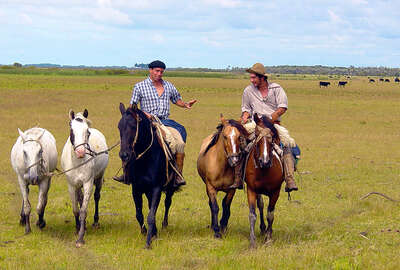 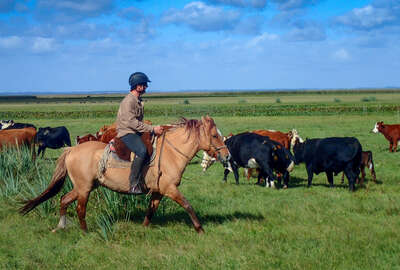 Expedition in the Rocha

To enter Uruguay, a passport valid for the duration of stay is required by all Australian, British, Canadian, USA and other EU nationals.
Visas:
Visas for Uruguay are not required by nationals referred to above for stays of up to three months.
Nationals not referred to above are advised to contact the embassy to check visa requirements for Uruguay.

MasterCard, Visa, American Express, and Diners Club are the most commonly used credit cards. All are widely accepted in major tourist and business destinations including Montevideo, Punta del Este and Colonia del Sacramento. In rural areas, it's best to carry cash as many businesses will not accept credit cards.

ATMs marked with the green Banred or blue Redbrou logo are reliable and available in all cities, as well as some smaller towns. These serve all major international banking networks, including Cirrus, Visa, MasterCard and Maestro.

The telephone dialling code is +598

Roaming agreements exist with some international mobile phone operators. Visitors should check with their service provider before travelling. Mobile phones and SIM cards can also be easily obtained locally and are usually a less expensive option, especially for longer stays. Coverage is good in urban areas and patchy elsewhere.

Language: The official language is Spanish. Along the northern border with Brazil, many residents also speak a hybrid of Spanish and Portuguese known as Portuñol.
Religion: Roman Catholic is the predominant religion (47%), followed by Protestants (11%). Other religious minorities, including Judaism, account for less than 2% of the population. 40% of Uruguayans claim no religious affiliation.
Political regime: Republic
President: Tabaré Vazquez

Uruguay is one of the more prosperous Latin American countries. The economy has a traditionally strong agricultural sector, with beef and wool being the most important products; dairy exports to other Latin American countries are substantial. Crop farming is widespread, producing mostly cereals, rice, fruit and vegetables.
Manufacturing is concentrated in oil and coal-derived products, chemicals, textiles, transport equipment and leather products. The oil and coal, both for manufacturing and energy consumption (the latter supplemented by Uruguay's own hydroelectricity stations), are imported. Mining is confined to small-scale extraction of building materials, industrial minerals and some gold. The tourism industry brings in just under US$1 billion annually.
Uruguay's economic health depends heavily on that of its two large neighbours, Argentina and Brazil. In August 2002, both Argentina and, to a lesser extent, Brazil were gripped by financial crises. This led to a collapse in the cross-border trade upon which Uruguay is heavily dependent.
The government was forced to take emergency measures in the form of currency devaluation, loan rescheduling and, in an unusually drastic move, closing down the country's entire financial system as it approached meltdown. It also appealed for support from the IMF, which responded with a US$3 billion package. With the worst of the crisis past, Uruguay is now returning to something approaching economic health.

The only documented inhabitants of Uruguay before European colonization of the area were the Charrua, a small tribe driven south by the Guaraní of Paraguay. There have also been identified examples of ancient rock art, at locations such as Chamangá, and elsewhere.
The Spanish arrived in the territory of present-day Uruguay in 1516, but the people's fierce resistance to conquest, combined with the absence of gold and silver, limited settlement in the region during the 16th and 17th centuries. Uruguay became a zone of contention between the Spanish and the Portuguese empires. The first permanent settlement on the territory of present-day Uruguay was founded by the Spanish in 1624 at Soriano on the Río Negro. In 1669-71, the Portuguese built a fort at Colonia del Sacramento. Spanish colonization increased as Spain sought to limit Portugal's expansion of Brazil's frontiers. Montevideo was founded by the Spanish in the early 18th century as a military stronghold.
In 1811, José Gervasio Artigas, who became Uruguay's national hero, launched a successful revolt against Spain, defeating them on May 18. The Portuguese forces, thanks to their numerical and material superiority, occupied Montevideo on January 20, 1817, and finally after a struggle for three years in the countryside, defeated Artigas. In 1821, the Provincia Oriental del Río de la Plata (present-day Uruguay), was annexed by Brazil.
Only in 1828 the Treaty of Montevideo, fostered by the United Kingdom, gave birth to Uruguay as an independent state.

Regional strife continued for several decades, as Uruguay's two major political parties emerged. The liberally inclined Colorado Party, associated with Montevideo's business owners, and the right-wing National Party, representing rural interests, came to be known as Colorados ('Reds') and Blancos ('Whites') – terms that survive to this day. The Great War of 1843-52 and the War of the Triple Alliance (1864-1870) pitted the two parties against one another, prompting continued interventions by Argentina and Brazil until the Blancos and Colorados finally reached a stable power-sharing agreement in 1872.

In the late 19th century, an influx of immigrants helped transform Uruguay into an agricultural powerhouse. Under the progressive Colorado administrations of José Batlle y Ordonez between 1903 and 1915, Uruguay established Latin America's first welfare state, gave women the vote and abolished both the death penalty and the link between church and state.

As the 20th century progressed, Uruguay's economic fortunes deteriorated, sparking student and labour unrest followed by a suspension of civil liberties and a period of military rule in the 1970s and 1980s. Civilian rule resumed in 1985, accompanied by the ascendancy of the Frente Amplio, a leftist coalition that since 2005 has become Uruguay's first successful third party under Presidents Tabaré Vazquez and José Mujica.

Uruguay is bordered to the north by Brazil, to the southeast by the Atlantic, and is separated from Argentina in the west and south by the River Uruguay, which widens out into the Rio de la Plata estuary. The landscape features mostly rolling plains and low hill ranges (cuchillas) with a fertile coastal lowland. A dense fluvial network covers the country, consisting of four river basins or deltas; the Río de la Plata, the Uruguay River, the Laguna Merín and the Río Negro. Several lagoons are found along the Atlantic coast. The highest point in the country is the Cerro Catedral whose peak reaches to 514 metres in the Sierra Carapé hill range.
Uruguay has 660 km of coastline and there are a string of beaches along the coast. Most of the country is grazing land for sheep and cattle - about 90% of the land is suitable for agriculture, although only 12% is used in this way. Montevideo, the most southern point of the nation, accommodates nearly half of the population. There are nine National Parks in Uruguay: five in the wetland areas of the east, three in the central hill country and one in the west along the Rio Uruguay.

Social conventions:
Shaking hands is the normal form of greeting. Uruguayans are very hospitable and like to entertain both at home and in restaurants. Normal courtesies should be observed. Smoking is not allowed in public spaces, including restaurants, cinemas, theatres and public transport.

Wherever you have ranches and cattle, you will have people on horseback tending to them. These people are called differently  depending from where they come from: a 'Cowboy' if from the US, a 'Huaso' if from Chile, a 'Llanero' if from Colombia and Venezuela and a 'Gaucho' if from Argentina, Uruguay and southern Brazil.

The Gauchos are the men that work the cattle. Much has been written about the legendary gauchos that roam the pampas. The gauchos  are said to be very skilled horsemen and are depicted wearing clothes that reflect their life on horseback: a wide hat, a woolen poncho, long pleated trouser ('bombachas') and knee-high leather boots.

Today, their traditions are still an integral part of the ranching areas of Uruguay. They even have an official holiday in their honour called 'Semana Criolla'. During this holiday, the gauchos come in to the city of Montevideo to show their lifestyle to the city folk, sell their wares, cook meat and of course to show off their rodeo skills!

On your trail ride in Uruguay, you will have the chance to spend a day with the local gauchos and discover their way of life, even trying your hand at cattle work!