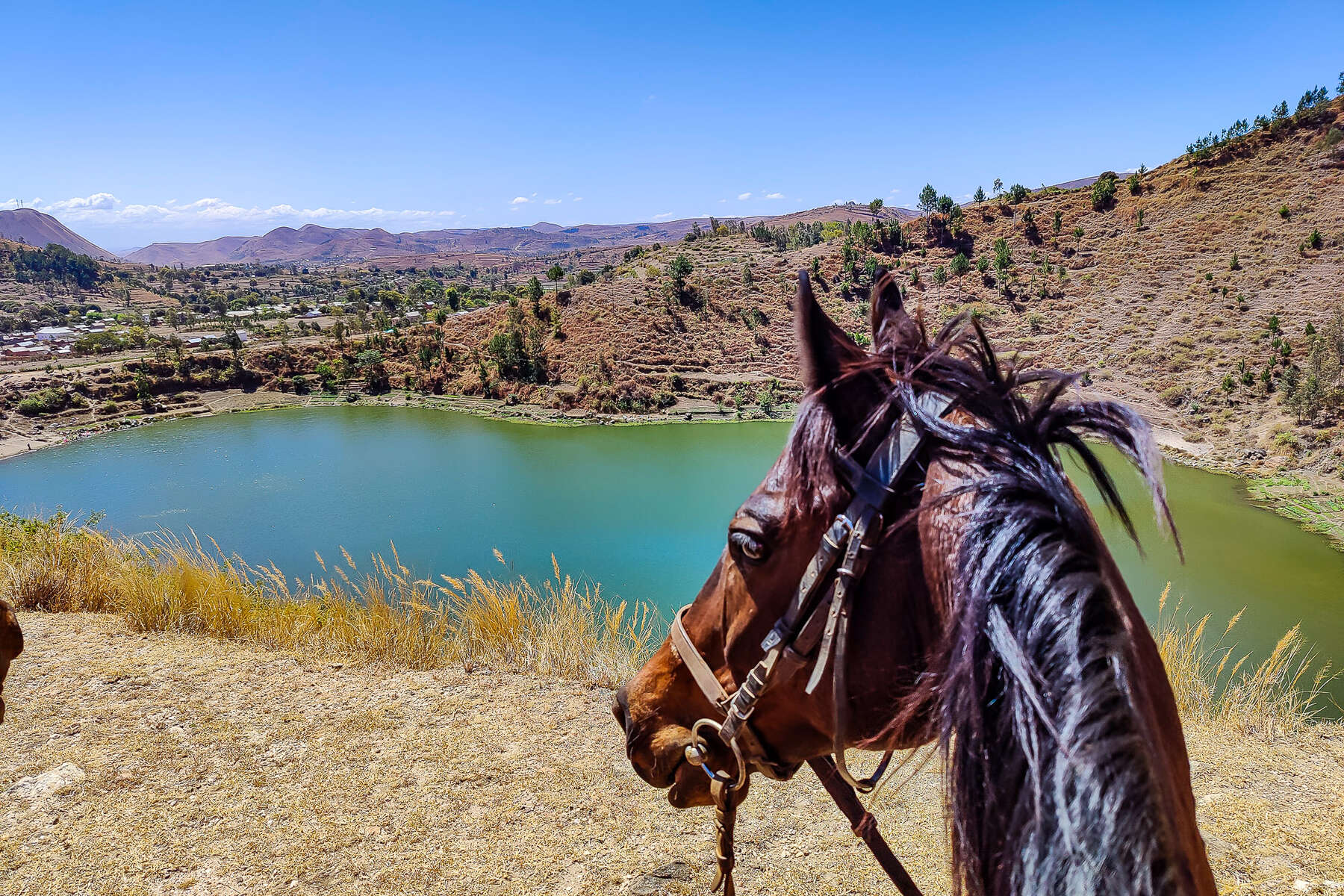 Riding holidays across the Island of Madagascar

Horse riding through Madagascar is a truly unique experience. Horses were once a rarity, but breeders, fascinated by the success of racetracks worldwide, crossed mares with imported thoroughbred English stallions to create the unique race that can currently be ridden on the island, the Anglo-Arab-Berber-Malagasy. Madagascar offers a spectacular variety of landscapes through which to ride - semi-arid desert plains, lush sub-tropical forests, mountains and plateaus, deep canyons, rice fields and mangrove forests. At the town and village stops, you will be greeted with warmth and curiosity from locals who may still find horses, and their riders, something of a novelty! Whilst discovering the island of Madagascar on horseback and wild camping out in the diverse scenery, you will encounter flora and fauna, such as the famous lemurs and comet orchid as well as the distinctive African Baobab trees.
See all our trips 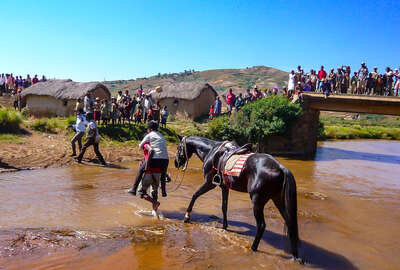 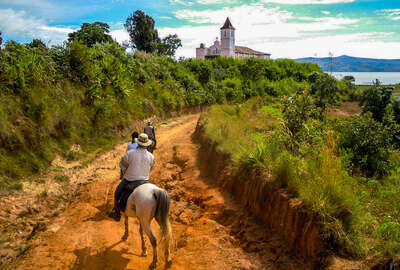 Ride from the highground to Madagascar's East Coast 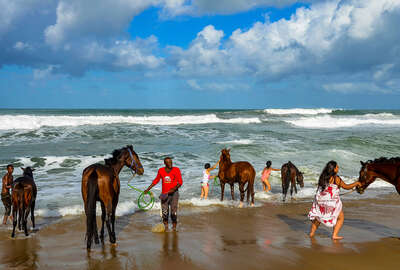 You can buy a 30, 60 or 90-day tourist visa on arrival at the airport. Make sure an entry stamp is recorded in your passport. A tourist visa has a maximum validity of 3 months and isn’t extendable.

Alternatively, you can apply for an e-visa on the official Malagasy e-visa website before you travel:
https://evisamada.gov.mg/en/

Make sure that your visa is valid for the period and purpose of your journey. Overstaying may lead to detention and deportation.

Your passport must have at least 6 months’ validity remaining on your date of entry into Madagascar. You should have at least 2 blank pages in your passport on arrival.
You will be asked for evidence of onward or return travel at check-in in the UK and on arrival in Madagascar.
There’s no Embassy of Madagascar in London.
For more information please visit: https://www.gov.uk/foreign-travel-advice/madagascar/entry-requirements

The information provided by Equus Journeys can evolve and are given for indicative purposes only.

Travellers should be up to date with routine vaccination courses and boosters as recommended in the UK. These vaccinations include for example measles-mumps-rubella (MMR) vaccine and diphtheria-tetanus-polio vaccine.

There is a high risk of malaria in Madagscar: atovaquone/proguanil OR doxycycline OR mefloquine recommended. There is also a risk of dengue in this country, and all travellers should avoid mosquito bites.

The following vaccines in this section are recommended for most travellers visiting this country: Hepatitis A, Polio, Tetanus, Typhoid.

For up to date information please visit:
https://travelhealthpro.org.uk/country/134/madagascar

In Madagascar the power plugs and sockets have two pins. The standard voltage is 127 / 220 V and the standard frequency is 50 Hz. British citizens require an adapter.

Visa cards are accepted in Madagascar. Mastercards are not always accepted.

Madagascar has been inhabited by human beings for the relatively short period of about 1,300 years. Language and culture point unequivocally to Indonesian origins, but there is no empirical evidence of how, why, or by what route the first settlers came to the island. The major foreign communities are French, Comorian, Indian and Pakistani, and Chinese, although emigration in the late 20th century significantly reduced their populations. There has been no significant emigration of Malagasy peoples abroad.

Archaeological investigations in the 20th century indicated that human settlers reached Madagascar about 700 CE. Although the huge island lies geographically close to Bantu-speaking Africa, its language, Malagasy, belongs to the distant Western Malayo-Polynesian branch of the Austronesian language family.

Much of Madagascar was populated by internal migration before the beginning of the 16th century, giving the theretofore empty lands their tompontany (original inhabitants, or “masters of the soil”).

The Malagasy Republic became independent in 1960, after a brief period as an autonomous republic in the French Community from 1958. Between 1972 and 1975 Madagascar was under military rule. Socialist political and economic reorganization was instituted in 1975, and a new constitution was implemented later that year for the renamed Democratic Republic of Madagascar.

Madagascar, island country lying off the southeastern coast of Africa. It is the fourth largest island in the world, after Greenland, New Guinea, and Borneo. Madagascar is located in the southwestern Indian Ocean and is separated from the African coast by the 250-mile- (400-km-) wide Mozambique Channel.

Madagascar consists of three parallel longitudinal zones—the central plateau, the coastal strip in the east, and the zone of low plateaus and plains in the west.

The hot, wet season extends from November to April and the cooler, drier season from May to October. The climate is governed by the combined effects of the moisture-bearing southeast trade and northwest monsoon winds as they blow across the central plateau. The trade winds, which blow throughout the year, are strongest from May to October. The monsoon, bringing rain to the northwest coast of Madagascar and the plateau, is most noticeable during the hot, humid season. The wind blows obliquely onto the west coast, which receives a moderate amount of precipitation annually; the southwest, which is protected, remains arid.

Madagascar is the fourth largest island in the world. Its located in the Indian Ocean, off the eastern coast of Africa. Madagascar is home to thousands of animal species, but especially known for lemurs, which are found nowhere else in the world: in fact, 90% of the wildlife in Madagascar is only found there. This diverse island is home to lush rainforests, beaches, reefs and mangrove forests – a hint to why the wildlife is so diverse.

The capital, Antananarivo, is well known for its “Avenue of the Baobabs”, a dirt road lined by these massive centuries-old trees. There are six different Baobab species on this magnificent island, more than 100 species of Lemur and an array of chameleons that cannot be matched. Seeing lemurs whilst out riding is a magical and entertaining moment that you won’t forget. French and the local language Malagasy are widely spoken on the island.

The climate is marked by its cool and dry winters, from May to October, and mild, rainy summers, from November to April. During the cooler seasons, the temperature rarely falls below 10 °C and in the hot season, it rarely tops 30 °C, making it the perfect choice for a riding holiday.