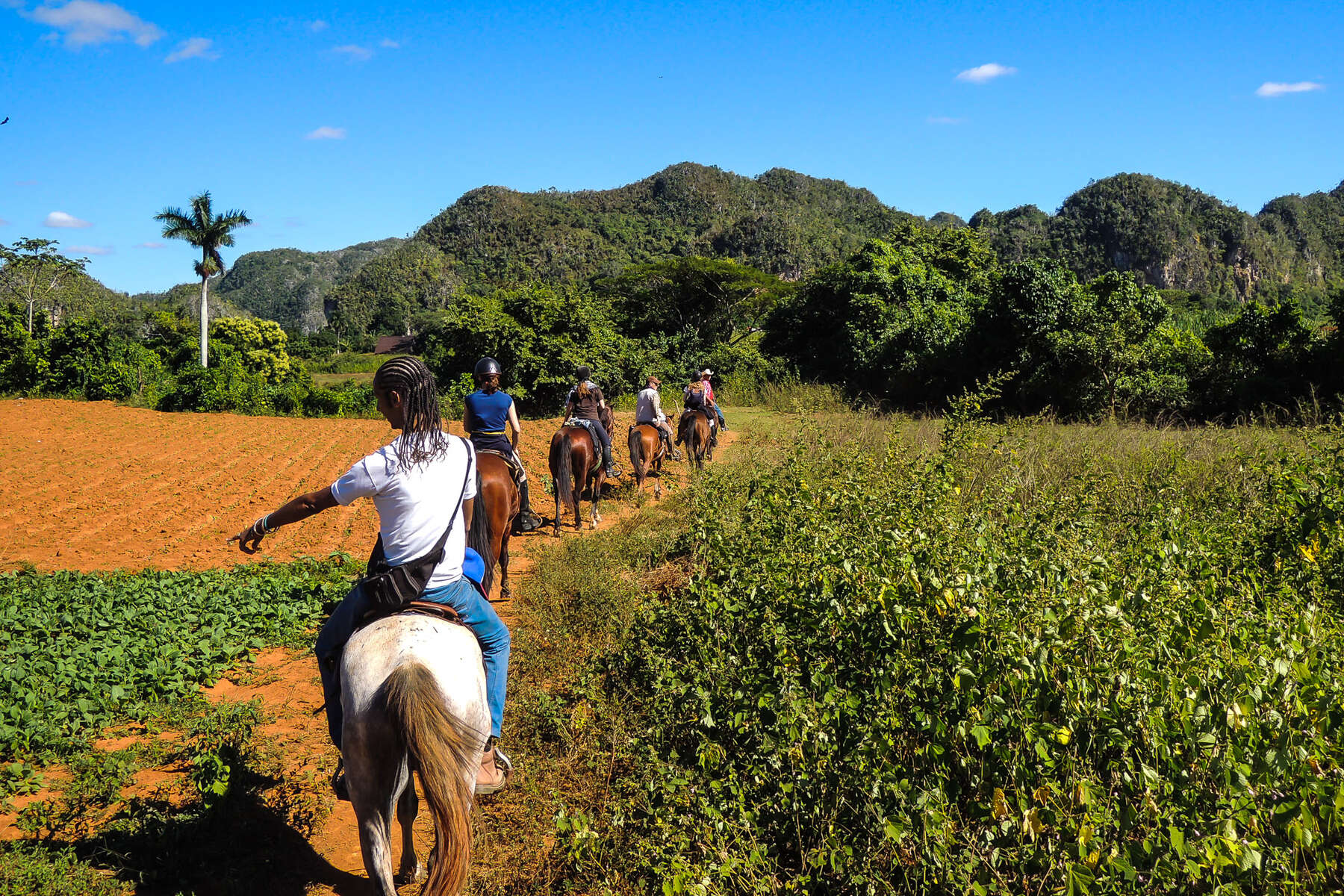 Cuba, the largest and most populous island in the Caribbean, gives the impression, visually, that since the 1959 embargo it has been frozen in time; the streets play host to vintage American cars while horse-driven carts criss-cross the countryside. However, Cuban culture has its own energy and its natural heritage and the people are unique and vibrant. A country of visual contradictions where well kept colonial buildings shoulder rundown tenement buildings. Whilst trail riding in Cuba, discover three mountain ranges, two vast savannahs, the famed Vinales Valley, waterfalls, cascades and mogotes. Thousands of miles of enticing beaches are the colour of pearls and the country alive with the sounds of Cuban and Creole music.
See all our trips 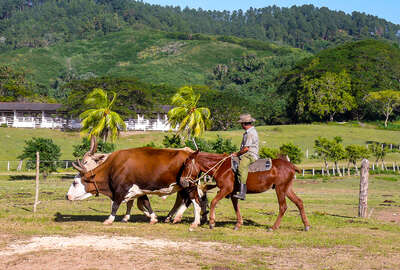 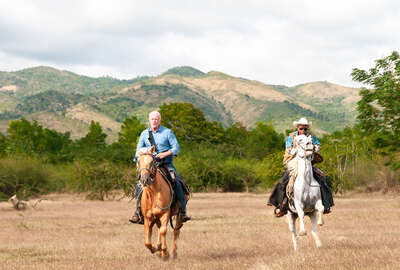 Passports:
A passport valid for two months after departure from Cuba is required by all UK, USA, Canadian and other European nationals. Nationals not referred to are advised to contact the embassy to check visa requirements.

Visas:
Visas for Cuba are required by all nationals from the USA, Canada, UK and the EU.
The required tourist visa, known as a tourist card, allows the holder to stay in Cuba for 30 days and is valid for a single entry. You must provide proof of confirmed return flight and booked accommodation.
Visa note:
Nationals of the USA are subject to the Cuban assets control regulations enforced by the Office of Foreign Assets Control (OFAC; https://www.treasury.gov/resource-center/sanctions/Programs/pages/cuba.aspx
Types and cost:
Tourist card: £15; business visa: £41, plus £19 processing fee for either if applying by post, courier or third party.
Validity:
The tourist card is valid for one entry of 30 days within 180 days of issue and can be extended in Cuba for a further 30 days.
The USA officially prohibits its citizens from travelling to Cuba unless they obtain a special license and very heavy fines are imposed on visitors not fulfilling this requirement.
The US government will allow the following to travel to Cuba (decided on a case by case basis): official government travelers, journalists, persons visiting close relatives once in 3 years, full-time professionals conducting research, full-time professionals attending certain international conferences, and persons who have received a specific license.

It is a condition of your booking with Equus Journeys that you have travel insurance which covers you for the riding activities to be undertaken. Your travel insurance should cover you for medical expenses and repatriation. You must show a Spanish translation of your policy on arrival at the airport - if you do not have it with you, you will be asked to purchase one at the airport.

Your guides will require your travel insurance details before they allow you to ride and may refuse to let you ride if you cannot provide them. You should take your insurance documents with you.

110/220 volts AC, 60Hz. American-style flat two-pin plugs are generally used, except in certain large hotels where the European round two-pin plug may also be found.

There are two currencies in use in Cuba - the CUC (Convertible Peso) and the CUP (Cuban Peso). Tourists use the CUC. Cubans call the tourist dollar a "chavito" and the Cuban peso "moneda nacional" or MN. Very few travellers will see the Cuban Peso during their trip. The CUC has a pegged currency exchange rate of $1.08 and is officially only exchangeable within the country. There is an additional 10% penalty assessed on US dollar conversions, so travellers are advised to bring Canadian, Mexican or European currencies.
Coins in circulation are one, five, ten, 25, and 50 centavo coins and one and five peso coins. The one centavo piece was introduced in 2000, and the five peso coin is very rare. Banknotes in circulation are one, three, five, ten, 20, 50 and 100 convertible peso bills.
To exchange money, currency exchange desks are set up in airports near the luggage carousel. In Havana’s Jose Marti Airport, there is also an exchange counter in the public reception area and a bank on the 2nd floor. Throughout Cuba, any bank and most CADECA exchange counters will convert for you. When departing Cuba, you can exchange most of your CUCs prior to arriving at the airport as occasionally, your currency of choice may not be available.

The country calling code to Cuba is 53. To make an international call from Cuba, the code is 119.

Telephone calls from Cuba are very expensive. You should ask your telephone company for the option» (Roaming international).

Did you know?: Almost all of the riding you will do in Cuba is in the Natural and Biosphere reserves, natural landscapes and protected areas characterized by their excellent state of preservation and features unique to the region. Moreover, the indigenous flora consists of more than 6,300 varieties displayed in a riot of different colors and shapes.
Did you know?:
Did you know?: Cuba is home to a stunning automobile park. There are an estimated 60.000 vintage cars still in Cuba. After 50 years many of the American cars are still on the road due to excellent preservation. They have been cherished by their owners who have patched them up with Russian and Chinese tractor parts. They can be seen rolling up and down Cuban streets together with European or Asian vehicles and the Ladas, Moskvitchs and Volgas imported by the communist regime. One of the top attractions in this wonderful country is the amazing automobile park you will visit during the trip, where you can see many fine examples of these vintage vehicles.

In response to the recent global economic downturn and domestic inefficiencies, Cuba began a dramatic economic readjustment process in 2010 which is projected to last a minimum of 5 years. Import substitution, stimulating private enterprise and foreign investment, slashing 1 million state jobs, plus cutting state subsidies of food, stimulating the formation of cooperatives, and collecting taxes were among the sweeping reforms proposed. Additionally, over 170 types of private businesses were approved for licensing - an opportunity more than 200,000 Cubans have taken advantage of since the announcement in October. Unifying the country's two currencies was outlined as a longer term goal.

In spite of the blockade, tourism continues to grow, and is a key source of hard currency. Cuban doctors, teachers, and other professionals working abroad in return for raw materials such as oil are significant contributors to the country's continued survival.

The first settlers of Cuba were the Guanajatabey people who came to the island sometime between 5300 BC to 1000 BC. When the Spanish arrived, their population was around 100,000 and they practiced a mixture of hunting, gathering and farming.
Although discovered by Columbus on his first voyage to the New World in 1492, the island's coastal area was not fully mapped until 1509. In 1511 Diego Velazquez de Cuellar set out with three ships from Hispaniola to found the first Spanish settlement of Baracoa. African slaves were brought in to cultivate the island's main resources of sugar and tobacco. Interestingly, the sugar trade did not explode until the 19th century after Spain reduced its trade regulations. This boom lasted until the 1880s. Also throughout the 19th century, the ideas of freedom and independence started to grow in Cuba.
With the assistance of people in the United States, Cuban freedom fighters, earlier expelled from Cuba, returned with three ships heavily loaded with soldiers and weapons. The war raged for three years until the US Battleship Maine was destroyed while docked in the Havana harbour. After this, the US government decided to back the rebels. Within a few months the US took over Cuba from the Spanish. The economy quickly grew and the first elections were held in 1900, although very few people got to vote. In 1901 the Platt Amendment was passed which defined USA-Cuban relations until 1934. This amendment placed many unfair restrictions on Cuba, keeping Cuba a de-facto colony of the USA. Presidents changed quickly in Cuba until the military coup of Batista in 1933. Encouraged by the Americans, Batista took over the government and controlled a series of puppet presidents. He was elected in 1940 and ousted in 1944. In 1952 he returned to power again with a coup. After this coup the revolutionary Fidel Castro started an uprising, which failed causing him to flee the country. In 1956 Castro returned, landing with a boat (the Granma) to start a revolutionary force in the mountains. His patience was rewarded when on January 1, 1959 his forces overturned the government of Batista.
Castro took firm leadership of the country, and founded a communist state on the island, making Cuba an instant enemy of the USA. In 1960 the communists started to nationalize many factories and private property. A year later a group of Cuban exiles, backed by the USA, tried to overthrow Castro's regime by invading the country at the Bay of Pigs. The already bad relationship between Cuba and the USA, led to the Cuban Missile Crisis in 1962, when the US demanded the immediate withdrawal of Soviet missiles placed on Cuba.
Economically, Cuba was not doing well, something even Fidel Castro admitted in the early 1970's. In the mid-1970's economical reforms were carried out. Due to the cold war with the US, the Cuban economy suffered greatly during the 1990s after the fall of the USSR, leading to the slow dilapidation of some historic sites. The faltering economy forced the Cuban government to refocus on tourism, as well as changing other policies. It became possible for Cubans to own their own guesthouses. Cuba promoted foreign investment, leading to the emergence of dozens of new joint ventures between the Cuban state and foreign investors. The changing policies saw a massive turnaround in the Cuban economy.

Cuba is the largest Caribbean island, about the size of England, and the most westerly of the Greater Antilles group, lying a mere 145km (90 miles) south of Florida.
A quarter of the country is fairly mountainous. West of Havana is the narrow Sierra de los Órganos, rising to 750m (2,461ft) and containing the Guaniguanico hills in the west. South of the Sierra is a narrow strip of 2,320 sq km (860 sq miles) where the finest Cuban tobacco is grown.
The Sierra de Escambray and Montañas de Guamuhaya behind Trinidad in the centre of the country rise to 1,140m (3,740ft). Encircling the port of Santiago are the rugged mountains of the Sierra Maestra. A quarter of the island is covered with mountain forests of pine and mahogany. Cuba has few rivers of note, the exception being the Río Cauto in the east. The country has 3,735km (2,321 miles) of coastline and thousands of offshore islands.

Social conventions:
While handshakes are used in more formal settings, in almost all other situations, the typical greeting in Cuba is one kiss on the right cheek. A handshake is the normal form of greeting. Cubans generally address each other as compañero, but visitors should use señor or señora.
Some Cubans have two surnames after their Christian name; the first surname is the correct one to use. Normal courtesies should be observed when visiting someone's home, and a small gift may be given if invited for a meal. Cuban men rarely wear shorts away from the beach. Visitors doing so are not frowned upon, but they may receive the odd sideways glance. Women should cover their legs and shoulders if visiting churches. Cuban women tend to dress up for evenings out. Cubans of all classes like to dress up (especially for evenings out) and tourists are often seen as underdressed as a result.